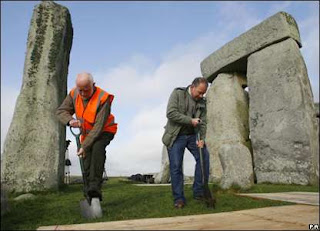 Sorry folks -- I have just realized that that stuff about the "new Stonehenge" and the latest earth-shattering discoveries from Salisbury Plain was just an April fool's joke (quite a good one, it must be admitted) that got left over from April 1st....... in my last few posts I have taken it far too seriously.

Perhaps nothing is real? And maybe our friends Wainwright, Darvill and Parker Pearson are really nothing but figments of our imagination? And if they don't exist, maybe Stonehenge doesn't exist either? Maybe it's just a gigantic hologram, paid for by English Heritage and the English Tourist Board to bring foreign currency into the UK and to promote the idea that there are clever archaeologists beavering away on important things, using terribly sophisticated scientific techniques? I'll put a fiver down and bet you that the next earth-shattering development will come from the University of Shrewton Atkinson Institute for Virtual Excavation, with funding from Google Earth and exclusive rights sold to the Murdoch News Empire.
Posted by BRIAN JOHN at 21:20