Carn Meini and the Battle of Preseli 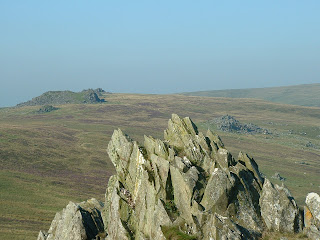 It's not often realised that after the Second World War the War Office made a proposal to take in 58,000 acres of land -- encompassing virtually the whole of the Preseli upland area -- as a military training and bombing range. This caused an immediate and virtually unanimous reaction from all sections of the community in Pembrokeshire -- and the campaign to save the mountain was referred to as "The Battle of the Preselau" by author Hefin Wyn in a book published a couple of years ago. The campaign united the Welsh and English speaking parts of the community, and it was multi-faceted, with economic, political, social, religious and ethical arguments all thrown in the direction of the War Office by community leaders.

In situations like this, with a whole community feeling itself under threat, every possible argument is rehearsed and brought to bear on "the enemy." The politicians in Westminster must have been amazed by the vigour and the sophistication of the "Save Preseli" campaign. In this, a number of very prominent pacifists took a leading role, and many nonconformist religious leaders not only thundered from their pulpits but became involved in lobbying and protest activities. They stressed the importance of Preseli as a cultural and spiritual heartland of Wales, and demanded that the establishment of a firing or training range would be not only disrespectful to Welsh heritage but also sacrilege of the most abominable kind.

It was therefore not surprising that one of the arguments brought forward was connected with the supposed sanctity of the mountains as a whole but also Carn Meini in particular. The ideas of HH Thomas came in very handy indeed. a great quantity of purple prose landed on the desk of Prime Minister Attlee -- with frequent references to Carn Meini, the bluestones, and Stonehenge. The land was referred to over and again as "sacred" and words that crop up over and again in the correspondence include "heartland", "sanctity" and "sacrilege." The mountain around Carn Meini was a cradle of civilisation, a prehistoric cathedral, a treasure trove of antiquities, a place of mysticism and tranquillity, of spiritual regeneration and wonderment.

Wonderful stuff -- and it did the trick. The plans for the military range were abandoned, and the Army moved to Castlemartin and the Brecon Beacons instead, where there was much less opposition. So we must, I suppose, be grateful for the manner in which the ideas about the sanctity of Carn Meini played a part in saving the uplands for us to enjoy in perpetuity, as commons and as wild places.

But none of this should blind us to the fact that we are talking here about a full-blooded community campaign and about strategy and tactics. To a degree, the campaign was cynical in that it "pretended" a sort of reverence for eastern Preseli that I do not believe has ever been there in reality. In the years 1946-1948 the ideas of HH Thomas were given a massive boost, and the thesis that the Eastern Preseli Hills are "sacred" really dates from that time. All very handy indeed, when Profs Darvill and Wainwright came along looking for their bluestone quarry and for something to show that there was a spiritual or even religious reason for the carrying of lots of bluestones from here to there.
Posted by BRIAN JOHN at 15:32