The Mesolithic post-hole and the bluestone fragment 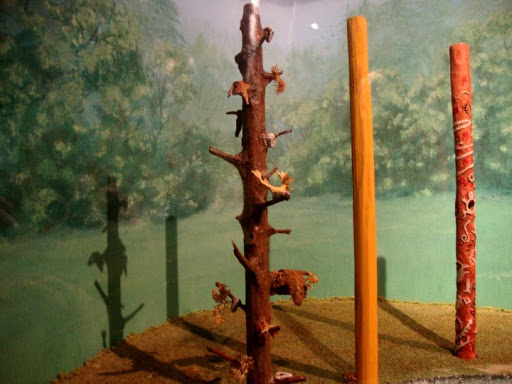 "Modern Antiquarian" reconsteuction of what the post holes might have
supported in the Mesolithic.
I have been hunting down some more information about post-hole WA9580 in the old Stonehenge car-park that was supposed to have a rhyolite fragment in part of the fill. It's written up in the vast Stonehenge volume edited by Ros Cleal in 1995.  I did a post about this here:

As I mentioned at the time, Michael Allen spoils his description by simply assuming that the rhyolite fragment could not have been in the Stonehenge area during the Mesolithic, and that it could not have arrived before the assumed "bluestone monolith arrival date".  That sort of thinking bedevils nearly all of the work on the Stonehenge debitage and sediment fills -- and matters are made worse when workers use the presence of bluestone fragments in particular context as a means of dating the deposits to the late Neolithic.  And so circular reasoning kicks in -- authors assume that because a bit of bluestone is found in a late Neolithic deposit (which might actually be older) it could not possibly have been present in the landscape any earlier than that.

In the same time we see records of bluestone fragments in all of the Aubrey Holes, so it is instantly assumed that the fills are "post bluestone arrival".  I know that most dating is done through the use of other methods as well -- and in particular radiocarbon dating -- but nonetheless, I wonder how many drastic errors have crept into the literature because of this one simple and probably erroneous assumption?

In a recent blog post, Robert John Langdon picks up on the strong possibility of erroneous interpretations, and casts further doubt on the assumption that the bit of rhyolite in the post hole cannot have been present here more than 6,000 years ago.  Here is his post:

Robert John Langdon
Prehistoric Britain web site
http://prehistoric-britain.co.uk/contact
6 Feb 2021 post
CASE STUDY – An Inconvenient TRUTH (Craig Rhos Y Felin)
February 6, 2021 Robert John Langdon Craig-Rhos-Y-Felin, River Avon, Stonehenge
Extract from the book : The Stonehenge Enigma
The report from the 1966 excavation reads: “It is unfortunate that no dating evidence was obtainable from the three holes in the form of pottery. Certainly, the holes themselves would appear to be Neolithic in character, very similar to others excavated of this period….. comparable traces of posts have been found in a Neolithic context… such as King Barrow Wood” Lance and Faith Vatcher. 3

Moreover, the charcoal deposits were sent to their laboratory, and the results were: “It is surprising, in the view of the chalkland environment, that most of the charcoal should be pine. Pine has, however, been found at other sites where it would not be expected, notably Woodhenge” – but even so, these samples were not requested to be carbon dated.

Fortunately, some years later an inquisitive PhD student writing a thesis on the Stonehenge environment found these samples and concluded that they could not be Neolithic, as claimed by the archaeological community, as they were from pine trees which pollen analysis had concluded were ‘extinct’ in this area at this time of Stonehenge’s supposed construction.

The officials (of the Historic Buildings and Monuments Commission, which was later renamed English Heritage) were dismayed when they found out that their ‘experts’ were wrong, and the student was absolutely correct (yet sadly, never gave her a deserved job!!) in her assumption as the carbon dating placed them at the start of the Mesolithic of 8860 to 6590 BCE just after the last ice age. Furthermore, what happened to the pine Woodhenge samples as indicated in the lab report of 1966 – which to date have not been carbon dated, are they also Mesolithic and not Neolithic as their original unscientific estimation, if so, what is the real age of Woodhenge?

Consequently, rather than then admitting their fundamental error and re-opening the site to look for more holes and dates to get to the bottom of this unique mystery (which would have been the case for most credible scientific disciplines) they came up with a remarkable and unproven story that these were random ‘totem poles’ placed by wandering ‘hunter-gatherers’ which did not relate to the Stonehenge site just 50m away. But was a sheer coincidence, which should be totally ignored.

If the missed carbon dating of these Mesolithic posts didn’t spark an enquiry into the dating of Stonehenge, then another similar discovery three years later in 1988-89 should have done, as Wessex Archaeology, were employed to undertake an investigation of the area next to the Old Car Park and the construction of the Visitors Centre, opposite Stonehenge. They reported a series of stripes under the surface (they thought was periglacial) and a single pit WA 9580 which was on the line of the other posts found in 1966, in the area of the old ticket office.

Within the pit they found (no doubt to the dismay of EH) yet another Mesolithic post hole that match the dates of the 1966 findings. Moreover, what they also found should have transformed the current dating of the Stonehenge site. 40cm below the top of the pit they found ‘a single piece of rhyolite (62g) within context layer 9581 at the same stratification level of 9585 carbon dated at 7737 – 7454 BCE.

Again EH attempted to supress this finding by suggesting that ‘this layer was not earlier than, and was probably contemporary with, the dressing of the Bluestone’ – which might be so if the bluestone was not BELOW context layer 9582 which was dated 7595 – 7178 BCE.
====================
I don't know all the details here, and am more inclined to cockup theory than conspiracy theory  -- but I think Robert has got his contexts wrong.  The little bluestone fragment was in context 9581, at a depth of just 20 cms -- not 40 cms as stated by Robert.  Also, it was in the "upper tertiary fill"  and not context in 9584.  But I agree with him that there is something strange about the pinus remains found here, and I agree that just because the rhyolite flaks was in a "tertiary fill layer,  it cannot be assumed that it was not present in or near the hole when it was initially dug, possibly more than 8,000 years ago. 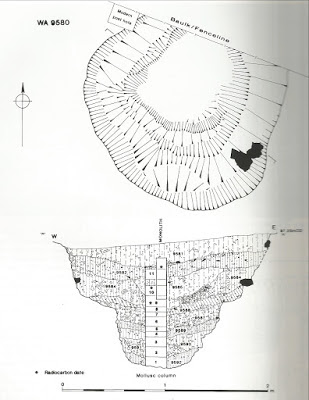 From memory, I think there is also a detailed write - up on our friend Austin Kinsley's "Silent Earth" website of the Mesolithic post holes near Stonehenge. We probably acknowledged this in your earlier Post.

In the Wiltshire Museum Zoom meeting last night, Director David Dawson mentioned the very early, Mesolithic cattle or aurochen bone found somewhere in Stonehenge. So based on what you are saying here, things could indeed be all over the general vicinity of what is now Stonehenge.

Yes, I saw Austin's work. Interesting article....... raising more questions on the length of time that has elapsed since those bluestone "fragments" arrived on Salisbury Plain.....