Stonehenge -- rhyolite in a Mesolithic context? 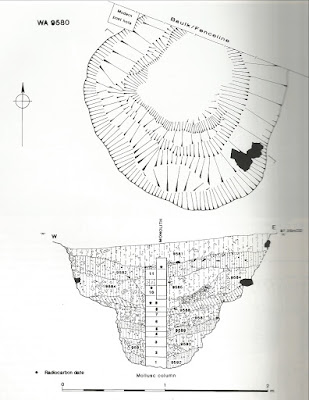 On looking through Ros Cleal's mammoth tome the other day, I came across a rather interesting reference to a "rhyolite chip" in what appears to be a Mesolithic context.   This would not, of course, be the first time that a piece of bluestone has been uncovered in a pre-Stonehenge context.......

In Chapter 4 ("Before Stonehenge") Michael Allen makes use of the unpublished notes of Martin Trott, working for Wessex Archaeology at the behest of English Heritage, to study those famous post holes in the old Stonehenge car park.

In Pit 9580 (the easternmost pit, very close to the old Visitor Centre), there was a very varied fill of sediments about 1.3 m thick.  The pit seems to have been re-cut and modified several times, the most prominent modification being a transformation into a wide shallow pit (purpose unknown) just 70 cms deep.   Trott described primary, secondary and tertiary contexts.  The most interesting thing about the recut tertiary fill at the top of the sequence (context 9581) is that it contained a piece of rhyolite weighing 62g, at a depth of 20 cm.  Then we come to some circular reasoning -- Allen says:  "this latter find is of some significance as it indicates that this layer was not earlier than, and was probably contemporary with, the dressing of the bluestones (phase 3)."  That is one explanation -- the other is that the rhyolite chip was there when the pit was in use, or was being filled in, very much earlier than Bluestones Phase 3. This latter explanation is supported by the radiocarbon date of 8400 +/- 100 yrs BP obtained from charcoal in the tertiary fill layer.  The layer is pretty well homogenous, and there is no reason to think that the rhyolite chip was introduced and buried here more than 3,000 years after the Mesolithic pit was finally filled.  If it had been, there should be signs of some break in the stratigraphy.

Then it gets even more confusing, since detailed work on the molluscan fauna and on pollen analyses from the side of the opened pit indicate a "hiatus" between the lower parts of the pit fill and the "tertiary fill" near the surface.  Allen and other researchers suggest that there was indeed a break of as much as 5,000 years between the Mesolithic and Neolithic activity.  In the Mesolithic (Boreal) period there was a wooded landscape, and when the sediments of the tertiary fill were emplaced the landscape was much more open.  But is that assumption of a long hiatus based upon the assumption that rhyolite cannot possibly have been present in the neighbourhood during the Mesolithic?  Could the clearance of land and its transformation from open woodland to a grassland area have taken place rather quickly -- or over a few thousand years -- during the Mesolithic, as a result of burning?  Should we believe the radiocarbon date, or treat it as an aberration?

This is all very intriguing -- does anybody have more information?
Posted by BRIAN JOHN at 22:43

I am fairly sure I have mentioned this to you before, Brian, but not from this particular source. I reckon it was on the excellent Silent Earth blogsite, which was reporting, secondhand, about this discovery in one of the car park Mesolithic postholes. Does that ring any bells with you/anyone else? e.g. PeteG?

The Silent Earth Post was written by Austin Kinsley on 20/02/15. It does mention the piece of rhyolite.