The politicisation of the Neolithic 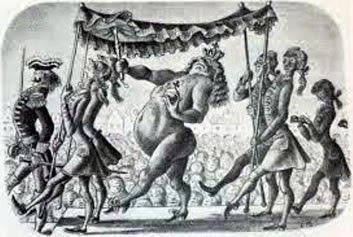 Not only does the Emperor have no clothes, but the Empire itself is just a figment
of somebody's over-fertile imagination..........

At long last, a pair of archaeologists who are prepared to tell it like it is, and a journal prepared to publish their paper.  Gordon Barclay and Kenneth Brophy have published this devastating survey of much that is wrong with British Neolithic archaeology.  So certain eminent academics will not be best pleased.  And it's gratifying that they are saying exactly what I have been saying about the high-tech isotope research which tells us far less about the Neolithic that certain people like to claim.......

The authors examine in some detail the complex interactions between senior academics and researchers and the media, on which they are increasingly dependent for the "marketing" of their ideas and the promotion of their careers.  For many years I have argued that the relationship is unhealthy and indeed dangerous, since university press offices always try to "sex up" press releases about new research, and academics themselves are tempted to place greater stress on column inches than on academic rigour and scientific integrity.

Anyway, thanks to Jon for drawing this to my attention, and thanks to Gordon for letting me see the whole article, which is unfortunately behind a paywall.

ABSTRACT
This article examines the interpretation and public presentation of a particular view of the supposedly ‘national’ role of monuments in a geographically restricted part of southern England – what we have termed the British late Neolithic mythos: that monuments in the Stonehenge area had a ‘national’, ‘unifying’ role for ‘Britain’ at a time when ‘Britain’ had a ‘unified culture’ and was isolated from continental Europe, and that as part of that process, animals for feasting were transported from as far as ‘Scotland’. We explore the trajectory of interpretative inflation, ‘possible’ > ‘probable’ > ‘certain’ > ‘sensational’ through academic and popular accounts, media releases, social media, newspaper articles, TV programmes, Research Excellence Framework impact reports, and the publications of the Arts & Humanities Research Council. We critically examine the evidence claimed to underpin this far-reaching re-interpretation of British prehistory. We examine the extent to which a priori assumptions can shape the interpretation of complex datasets and how unacknowledged nationalist and neo-colonialist thinking underpin its interpretation. We consider the way in which researchers have linked their work with contemporary politics – Brexit, a ‘united Britain’ isolated from Europe, perhaps to demonstrate ‘relevance, ‘impact’ and ‘reach’ to funding bodies. We conclude with some suggestions on ways forward including further research, and mitigating strategies.

The article is long, and quite dense, with a mass of references.  It has been carefully researched, and it is a proper "academic" paper (very polite!) while at the same time pulling no punches.  One of the main targets is what we might call the Parker Pearson School of Archaeological Thought, and the authors say many of the things I have been saying for years.  They don't mention the bluestone debate at all, because there are plenty of other things to talk about -- but their analysis slots in very easily to what I have been saying about the decline of the scientific method, assumptive research, the assignment of false significance, and the obsessive use of ruling hypotheses leading to the twisting and manipulation (and also the invention) of evidence.  At its worst, we are actually dealing with scientific hoaxes, perpetrated in pursuit of the desire to prove and demonstrate the reality of the "British Neolithic mythos".

Here are some of the posts I have done in the past few years, tackling these very issues: 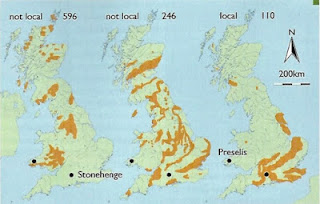 It's also interesting that Gordon Barclay and Kenneth Brophy spend some time, in the article,  on a careful scrutiny of the isotope analyses of teeth and bones which have been used in quite outrageous fashion by Madgwick and various others (including Parker Pearson) to promote the politicisation of the British Neolithic.  It's good to know that I am not alone in thinking that much of that research is seriously flawed, and that it has done serious damage to the credibility of archaeology.  Some of my posts on this:

As far as I can see, the only reference in this new paper to the bluestone controversy is in this statement:

Critically examining these data in this way, we must ask again why the authors of the books and articles referenced have chosen to emphasise more distant areas as potential, likely or even certain sources for these animals, especially given the existing links with Wales, demonstrated by the origin of the Stonehenge bluestones in the Preseli Hills (e.g. Darvill and Wainwright 2014; Parker Pearson et al. 2015).

What the authors are suggesting here is that there is no need to postulate long-distance travel of people, pigs and teeth from northern Scotland to the Stonehenge area when it is much more likely that areas much closer to hand (eg Preseli) will fit the bill.  Well, yes and no.  There is the "bluestone link".   But you still need evidence of some cultural or ethnic link between Preseli and Stonehenge, and in spite of what Darvill, Wainwright and Parker Pearson may have claimed in the past, the evidence is just not there.  The quarrying hypothesis is yet another example of something dug up to demonstrate a fanciful supposition which has been around for almost a century, initiated by HH Thomas.

The FOLK TALE of human transportation of Preseli bluestones is indeed so mythologised in the alleged 'scientific writings' of popular archaeologists from at least as long ago as Richard Atkinson that one might as well describe the myth as being veritably FOSSILISED in the received wisdom passed down to the likes of that Emperor/Pied Piper Mike PP.

It is, for example, so buried inside the skulls of various living archaeologists that the Human Transportation Tall Tale is repeated ad nauseum in various editions "Stonehenge: The Official Guide" without any trace of shame or apology.....

One day the Truth will out.

Yes, thank you, Jon, for letting Brian know about this academic paper so he was able to share it with all of us via the Blog.

I'm having my cage rattled by more knowledgeable people than me. "Hoy! Politics is archaeology. If you want funding off the current Government, guess what..."

When all I wanted was to take the piss out of 'bring a bluestone party.'

It seems the need to be exceptional trumps common sense with some archaeologists and some brexiteers. So we have 80 bluestones hand carried to Wiltshire, world beating track and trace apps, satellites on a shoestring, and the easiest trade deals ever. Enjoy the Prosecco!

"When all I wanted was to take the piss out of 'bring a bluestone party' [Steve H's comment].


Brian has said in his Post about the article:- "One of the main targets is what we might call the Parker Pearson School of Archaeological Thought".

An acronym occurs. What if we instead call it the "Parker pearson Institutionalised Super School of Archaeological Thought?".....