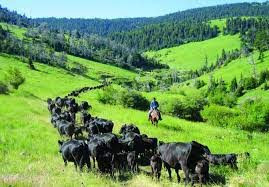 I missed this article last year, when it appeared.    There is some careful and convoluted phraseology in it, but the most interesting thing is that it represents a very substantial rowing-back from the pretty outrageous claims made by the same team -- and others -- in earlier publications.   I went after those claims on this blog, and there was clearly a big backlash from within archaeological and scientific circles as well.  Just read between the lines.  Is common sense reasserting itself at last?

The geographic origins of livestock found at the Late Neolithic site of Durrington Walls (Wiltshire, UK) is explored using strontium (87Sr/86Sr) and oxygen (δ18OcarbVSMOW) isotope analysis of tooth enamel as an archive of lifetime movement. The analysis of 49 cattle is augmented with data for small numbers of animals from the contemporaneous monumental centres of West Kennet Palisade Enclosures (4), Stonehenge (1), and Marden (1). Unburnt human remains are scarce at these sites and the suite of biomolecular analyses that can be undertaken on cremated remains is limited. Therefore, these animals provide the best proxy for the origins of the people who raised them and give key information on livestock management. This builds on the Sr isotope analysis of 12 animals previously published from Durrington Walls and complements recent research on pig remains from the same sites, providing further evidence for the scale of human and animal movement and the catchment of these sites. The strontium isotope signatures from the animals’ teeth range between values that are consistent with local chalkland grazing to radiogenic values typical of granites and older rock types. The oxygen isotope data, coupled with the strontium results, provide new geographic resolution and indicate that the majority of the animals come from southern and western areas of Britain.

These results have demonstrated the diversity of cattle origins at Late Neolithic Durrington Walls. The 87Sr/86Sr isotope data suggest that at least four distinct terrains are represented in the dataset. The majority of animals are consistent with an origin on the chalk and other Mesozoic deposits that dominate much of southern England and are common across Britain. Many of these animals must have been imported to the sites, though not necessarily over long distance. Two distinct groups of cattle are from more radiogenic terrains, probably characteristic of Palaeozoic areas, the closest of which are in southwest England and Wales. A final group has distinctive values of > 0.714 and must derive from areas of even more radiogenic geology. On the basis of current biosphere mapping data, origins in Scotland seem likely for at least some animals, but others may derive from radiogenic areas incompletely mapped in England or Wales. Oxygen isotope data indicate that the majority of the animals are likely to derive from western or southern areas of Britain. Highland areas in the north of England and northeast Scotland are probably not represented in the dataset, but depleted oxygen isotope compositions suggest that some animals came from eastern and/or central areas of England.

Cattle are an important component of animal bone assemblages from Late Neolithic Britain. Remains of cattle were second only to pigs in abundance at Durrington Walls, and the presence of large quantities of cattle remains, along with evidence of butchery and burning on many bones, indicates that they were included in feasting activities (Albarella and Serjeantson 2002). The zooarchaeological evidence is also consistent with an introduction of cattle to Durrington Walls, due to the almost complete absence of neonatal bones. Such remains are expected to occur in breeding areas, because of natural casualties—their absence therefore suggests that husbandry largely occurred off-site.

The movement of cattle over long distances is an example of their importance in Neolithic society. Not only were they a significant source of food, but their role in feasting was important enough to warrant a huge investment of time and energy in herding them over long distances. These animals clearly had a role to play in sustaining long-distance networks in Late Neolithic Britain. As a proxy for human movement, the cattle from Durrington Walls are representative of the human journeys that were undertaken during the period and suggest links between human groups in many different parts of the country, both close and distant. The few cattle teeth from other contemporary sites hint that this phenomenon was more widespread and, perhaps, that Durrington Walls was not unique, but part of a wider network of connections and livestock exchange.

The exogenous origin of the livestock is in contrast with the largely local nature of the material culture (Chan et al. 2016). Animals could be driven on the hoof, while large quantities of objects would have been very onerous to carry. Such practical concern meant, however, that the local and the imported both played a role in the make-up of the Durrington Walls ceremonies, and probably contributed substantially to define the character of the communities occupying—permanently or periodically—the Stonehenge landscape.
Posted by BRIAN JOHN at 11:14