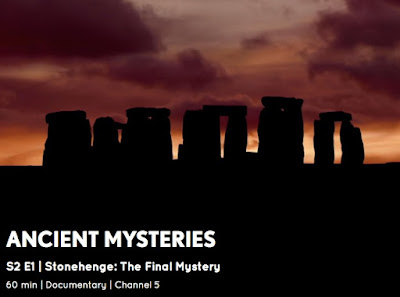 Thanks to Dave S for drawing attention to the latest Channel 5 blockbuster called "The Final Mystery of Stonehenge" -- featuring Prof Mike Parker Pearson and Francis Pryor competing in the purple prose and memorable insight stakes.    It is a 45 min programme, full of portentious commentary and dramatic music.  You know the sort of thing.......

Here is the link:

There was nothing in the programme about the "quarrying" and transport of the bluestones, but a lot about Durrington Walls, pigs, wild celebrations, ancestors and cremations, and periglacial stripes.  You know the sort of thing.........

So there was nothing very new.  But I was quite intrigued by some of the work here reported upon -- particularly that of Dr Christophe Snoeck of the Geology Dept at Brussels University.  In the programme there was a clear attempt made to suggest that "some of the bones" found in the collection of 500,000 bits and pieces from Aubrey Hole No 7 had come from West Wales, and that some of the pigs gobbled up in those great feats had come from West Wales too.  The bluestone and human transport connection was obvious -- it's all part of the attempt to build the myth.

But if we do some simple scrutiny, what do we find?  We find that most of the bone fragments (c 66%) were rather local, ie from the Salisbury Plain area.  That means that around 33% were from further afield.  And just some of those are apparently from West Wales.  What percentage?  I have written to Dr Snoeck to find out.

And how sound is the idea that they have come from West Wales anyway?  I have looked at the strontium isotope ratio maps again, and have found that there is no way that provenancing can be done with that sort of accuracy.  Dr Snoeck uses the maps of Dr Jane Evans and others, which show that the ratios for West Wales are the same as those for large parts of East Wales,  Exmoor, Dartmoor, the tip of Cornwall, parts of North Wales and Anglesey, the Southern Uplands of Scotland, and the Grampians.

It is perfectly reasonable to suggest that the bone fragments examined by Dr Snoeck are much more likely to have come from Devon or the Welsh Borders, since those areas are much closer to Salisbury Plain.

Spapdash pseudo science yet again, from Prof MPP, Francis Pryor and the people who put this programme together.  They clearly do not expect scrutiny of the abundant goodies that they scatter before us....... and assume that we will just lap it all up. 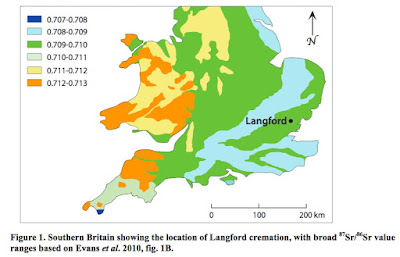 Strontium isotope ratio map from one of Dr Snoeck's papers, relating to a site at Langford. 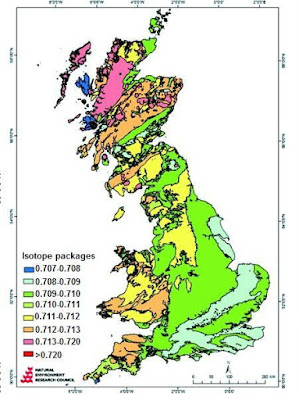 The much-cited map put together by Dr Jane Evans and others.  There is nothing unique, in terms of provenancing, about West Wales.

All this bunkum dressed up as solid scientific fact puts me in mind of that long - running Panel Show, "Call My Bluff" (1965 - 88) with Robert Robinson, 'Fwank' Muir and the incomprehensible Patrick Campbell.

The kindest thing I can say about Mike Parker Pearson and most of his high - profile television appearances is that he might consider giving himself a new middle moniker, and calling himself Mike "Poker" Pearson. He appears to be playing popular, Stonehenge - linked archaeology as a Poker game, as he waits to see who blinks first, him, or will it be Mr and Mrs Joe/Jo Public. What's It All about, when you work it out, Michael? Some of us believe in facts, not factoids, mutton dressed as lamb (apologies to any Welsh or English sheep reading this).

Brian, your use of the word "portentous", crops up in British Archaeology magazine's article in the July/ August 2017 issue, No. 155, about this Channel 5 Programme. It's on page 13, the regular column "Greg Bailey on broadcasting".

Greg Bailey, it says, researches TV archaeology in the Department of Archaeology & Anthropology, University of Bristol. Nice work if you can get it.