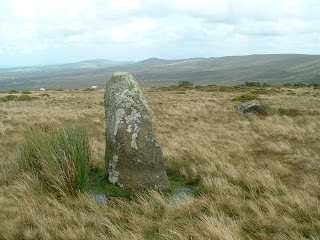 Without breaking any confidences, here is a brief summary of what has been placed in the public domain, arising from the 2017 digging season involving Mike Parker Pearson and his colleagues.  This was all under the auspices of the "Stones of Stonehenge" project.  The dig lasted about 3 weeks, ending around 20th September.  This very day the holes in the ground are being filled in.....

The focus of attention was again Pensarn, not far from Brynberian and Crosswell, on the south side of the B4329 road.  The minor road leads down to Pensarn, Droifa and Glanyrafon-Uchaf and other delightful cottages on the northern edge of Brynberian Moor.  It's where the annual Ras Beca cross-country races are held every August -- not that that's strictly relevant!  What's more relevant is the presence of abundant interesting landforms, sediments and Neolithic and Bronze Age features on the moor itself -- as noted in some earlier posts:

This is the key report which gives the regional context:

To return to the matter in hand.  What we now know is as follows:

1.  In 2016 the dig at location SN123358, on a low mound in the middle of the field, revealed a Bronze Age cist burial site, details of which are still to be published.  I summarised what we know here:
https://brian-mountainman.blogspot.co.uk/2016/09/pensarn-turns-out-to-be-bronze-age-cist.html


2.  Another field about 500m to the east of the Pensarn lane is referred to as Parc y Gaer (field of the fort).  Here there is a rectangular feature with two sub-rectangular boundaries, a square feature and irregular ditched enclosures to the south (all identified last year by the geophysics).  These are now investigated, and are apparently confirmed as the remains of a Roman villa.  This is exciting, since it would be the westernmost Roman villa recorded in Wales.  Kate Welham and her Bournemouth University team will have been working on this one.
https://brian-mountainman.blogspot.co.uk/2017/09/parc-y-gaer-pensarn-roman-villa.html
Just a word of caution:  some years ago there was great excitement when a supposed "Roman Villa" was found at Wolfscastle.  When it was investigated by Duncan Schlee and others, it was found to be nothing of the sort.........
Apologies for getting the location wrong in a previous post.   I have now done an edit to correct the mistake.
In the hedge to the west of the"villa dig" there is a large stone with "prehistoric rock art engravings" which were identified (correctly?) in 2016.  No doubt more work will have been done on this stone.

(a)  In the eastern pit (the one with the bucket, the trowel and the beer bottle) there is only a very thin layer of sediments (c 60 cms) over broken bedrock, but there is evidence of assorted features dating from the Iron Age.  It looks as if it might be an Iron Age defended homestead -- there is something that might be a defensive embankment.  Traces of walls have also been found, and in the dig there is a series of pits which may be post holes.  Some interesting domestic and decorative artifacts have been found, and organic materials are going off for C14 dating.

(b)  In the western Pensarn pit there are apparently traces of a Neolithic embanked enclosure of some sort -- a very subtle feature, since the sediments are very thin here and no sign of it could be seen on the ground surface.  It was picked up in 2016 by geophysical work including LIDAR.  Apparently there are some "very unusual features" showing up, which are not commonly seen in the British Neolithic.  It may be a henge of some sort.  Organic materials have been recovered, and these will go off for C14 dating.

(I have also heard rumours of a "worked" stone somewhere, which has been removed from its socket and taken away -- but I have no idea whether that rumour relates to one of the stones referred to above.......... We know already that there are other standing stones in the area, and other stones incorporated into hedgerows.  Both dolerite and foliated rhyolite. I had a look at some of these last year, in the company of Chris. ) 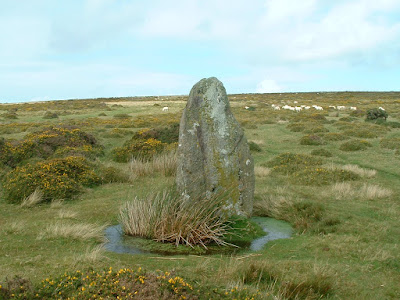 That's all we know at the moment, from what Mike PP has been saying on his guided tours and evening lectures over the past few days.  My informants are not always 100% attentive, and might misunderstand some things too.   If I have misreported anything, apologies -- no doubt somebody will correct me, and I will adjust the text accordingly.

Anyway, there is cause for pleasure all round, I think, since our knowledge of prehistoric north Pembs has been significantly advanced.  So congratulations to all the diggers for what they have come up with.  It confirms what we already knew from the unsung work of Dyfed Archaeological Trust over the years -- that there is a very long history of early settlement here, stretching from the Mesolithic through Bronze Age and Iron Age to Roman times, with a range of settlement and ritual features under the turf and out on the moor.  Some of the new sites will no doubt become scheduled ancient monuments, which is right and proper.

Observant readers might have noticed that none of the above information has anything whatsoever to do with quarrying, bluestones, Stonehenge, Proto-Stonehenge, Rhosyfelin, Carn Goedog, Carn Meini or the transport of monoliths.........

Good gracious! I put this post up just after 3 pm today and there are about 250 reads already, just in the space of a few hours. Some people out there appear to be rather interested.........

Guerillas in the Myths (apologies, my lisp is showing), and your breathless up - to - the - minute account of this Season's activities by said guerillas, clearly creates quite a popular audience for your Post.

Its a good summary - thanks Brian for all the effort you have put in. We'll look forward to the official publication of the findings in due course, but it does look like the Preseli area is a major beneficiary of this work, even if its not quite what the determined explorers were hoping to get.

Well, the Director of Wiltshire Museum has been pleased in what he found out after I told him about the Post!

Thanks Andy -- have tried to report honestly, but because the info comes from many sources I can't vouch for complete accuracy! However, thus far I have not been corrected on anything......

Nothing new for 2017 has popped up on MPP's Stones of Stonehenge Project site at:-

Who is Andy B - is he from the Pembrokeshire National Park?

Andy runs Megalithic Portal -- a very useful site, if you have not visited it. A vast amount of info on there, contributed by a very knowledgeable group.

Tony -- nothing ever seems to get added to that site. I suspect they have forgotten that it exists......

Oh yes, the Megalithic Portal...I do visit it.