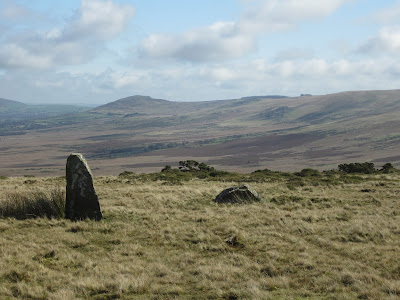 It's rather interesting that work has resumed at Waun Mawn at grid ref SN083341.  Apparently work started there very late in the digging season, maybe because the archaeologists were frustrated at having found no trace of proto-Stonehenge at either Pensarn or Parc y Gaer!  Anyway, there are signs of great activity up there, and some seriously heavy plant has been used.  It's all a bit of a mess at the moment, but it will no doubt settle down again over the winter..........

I'm quite pleased to see that this new work is going on, because the Waun Mawn - Tafarn y Bwlch - Cnwc yr Hydd area is extremely interesting.  Hummocky morainic topography, standing stones, old stone walls, ancient trackways, and even traces of an old deer park......... Use the search box to find previous posts.  If there is a Neolithic quarry anywhere in this part of North Pembs, it is here, at the top of the hill -- but there are other pock-marks lower down as well, from which rhyolite and metamorphosed shales appear to have been taken.  Goodness knows why. (Maybe the quarries are quite modern, having been used for road material for the trackway up to Gernos Fach?)

On the platform halfway up the hill there are 4 big stones that appear to have been used in a stone setting.  They are all dolerites picked up in the vicinity, all very heavily abraded and weathered.  They are certainly not freshly quarried from anywhere -- they are classic glacial erratics, although they have probably not travelled far from their places of origin. (But who knows?  They could have come from Cilgwyn or Carningli.)  Only one of the stones is standing, and there are two very big recumbent stones and one smaller recumbent stone which is just visible above the turf.  One can't see the full dimensions of the stones, but I reckon the two big ones each weigh between 6 and 8 tonnes.

The archaeologists have opened up six pits and closed them again.  These are the locations:

Two of the pits have been dug adjacent to recumbent stones, and four very extensive exploratory pits have been opened up -- two to the west and two to the east of the visible stones.  The stones may have been placed in the ground about 10m apart.  Rumour has it that two sockets have been found -- I'm not sure whether these relate to stones that are still there and have fallen over, or to stones that have gone missing........  I hope the archaeologists will publish a field report soon and give us the info on that. 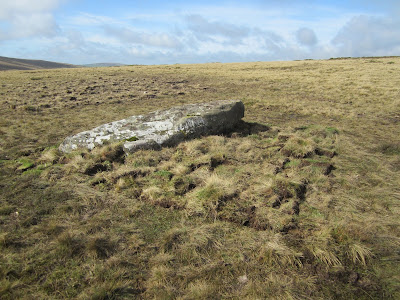 Recumbent stone number one -- the westernmost stone in the series.  You can see the traces of the dig around the stone, and at top left you can see the position of one of the exploratory digs. 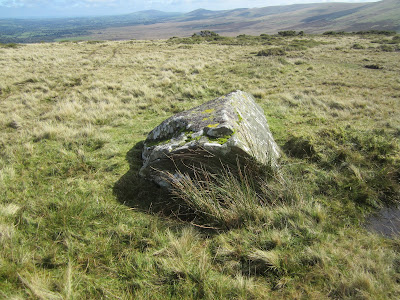 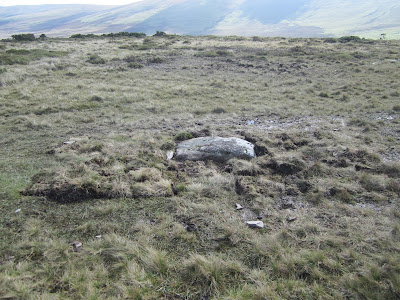 Recumbent stone number three -- apparently the smallest of the three.  There has been excavation on all sides of this stone

I'm a bit more convinced than I was that the stones may lie on the circumference of a very large circle.  If so, it must have had a diameter of around 140 m -- that is enormous, and much larger than the footprint of Stonehenge.  On the other hand, Avebury outer circle has a diameter of 331m, and Stanton Drew is 113m in diameter -- so who knows what might have happened here?

I still think that on balance this is a rather wonky stone alignment.  My reason for thinking that is that a circle with a diameter of 140 m would not have fitted onto this little step on the hillside-- it would have spilled over onto the steeper slope below, so that parts of the circle would have been quite invisible from other parts.  That would not have made any sense at all..........

Anyway, all very interesting, and we look forward to hearing what the archaeologists have to say about this site in due course.
Posted by BRIAN JOHN at 20:51