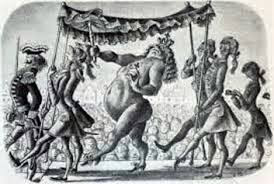 Even before we get to the article, the header says "Bluestone Quarries" -- so we know we are in for the same treatment as we got in the case of the "British Archaeology" article.  And of course we get it -- with no attempt at boring things like the presentation and analysis of evidence, this is another exercise in ruling hypothesis confirmation.

Quote:  "Although a Pembrokeshire origin for the bluestones was first proposed almost a century ago, only recently have geologists Richard Bevins and Rob Ixer definitively pinned down three areas on and around the Preseli hills where they were quarried (see p.23)."    Wrong.  They have pinned down three areas from which some of the bluestones and some of the fragments in the debitage might have come -- mo more than that.

Quote:  "...we have excavated two of these (quarries), at Craig Rhos-y-Felin (where the rhyolites come from).........."  Wrong.  No rhyolite orthostats have been provenanced to Rhosyfelin -- only some fragments in the Stonehenge debitage.

Quote:  "........We began our excavations at Carn Goedog in 2014, digging three test trenches along its southern edge where tall, thin, natural pillars in the rock face – perfect raw material for standing stones – were accessible through the surrounding scree."  That is a highly misleading statement -- there are elongated slabs and pillars everywhere, no more or no less accessible than  those which the archaeologists seek to invest with significance.  To suggest that there were designated "routes" through the scree is mischievous and designed to mislead.

Quote:  ".......Much of this surface had been subjected to early modern quarrying, we quickly found, as evidenced by drill holes in the shattered rock, and the discovery of a late 18th century coin........."    I remain to be convinced that these drill holes have anything to do with quarrying in historical times, since I cannot see what purpose these holes might have had.  The holes were certainly not designed to take explosive charges, but were they designed to take expanding metal bolts to assist with transport?  That's a possibility, but I still prefer the hypothesis that they have been drilled by geologists or geophysicists in the process of taking samples or affixing instruments....... or maybe they date from WW2, when lookout posts and radio installations were located on many Preseli tors.  As for the coin, that does nothing to demonstrate quarrying here.  A major drovers' route ran right through the gap between the tor and the hillside above, in the late 1700's and early 1800's, and I would expect a systematic search to reveal quite a few traces of this activity.  Maybe even a dead ox or two............

Quote:  ".....one area seems to have escaped this later disturbance, and it is here that we found traces of much earlier stone extraction. In this spot we could see where whole pillars had been removed from the rock face, a technique completely different to that used by the post-medieval quarrymen, who tended to break up the rock into blocks. It was evidence for prehistoric activity on a remarkable scale."   Sorry, but that is all speculation, and having examined the site carefully, on many occasions, I don't accept any of it.  There is no convincing evidence for either this prehistoric removal of "whole pillars"  or for the supposed quarrying techniques of later quarrymen.

Quote:  ".....At Carn Goedog, there were several recesses in the rock face where we could clearly see that multiple pillars had been extracted, and one in particular caught our attention, where four or five pillars had already been harvested from this spot, and four more were still in situ, ready to be removed."  Again, this is all fantasy -- nothing worthy of being called "evidence" is provided in support of any of it.

From this point on, we are on familiar territory -- the points made are very similar to those in the "British Archaeology" article and the "Antiquity" article which I have already scrutinised:

There are unsupported assertions on almost every line of the text, and it is really not worth the effort of going over all of it again.  There is even a fantastical description of the techniques that the "quarrymen" used, with their ropes and platforms, stone props and trestles, sledges, levers and pivots, wedge holes and "pick-shaped flakes of dolerite" (what on earth are these supposed to be, and what makes them unique on a tor subjected to millennia of frost-shattering processes?).  It's all very reminiscent of the speculations applied to Rhosyfelin in the "British Archaeology" and "Antiquity" articles -- and just as unconvincing.

As we have said before, the radiocarbon dates cited in this article simply demonstrate a long history of intermittent occupation.  There is no way of linking any of the dates to actual prehistoric quarrying activity.

The section of the article headed "Rolling Stones?" contains nothing new.  We see the usual unsupported assertions and assumptions, and again the radiocarbon dates cited do nothing to demonstrate a chronology for supposed quarrying activity.

The final section of the article is again unsurprising, and flags up (once again) the exciting news that 2016 will be the year for the great search for a proto-Stonehenge "on a plateau between the two quarries."  The archaeologists have to find somewhere for 80 or so bluestones to have been parked for 400 years before being taken off to Stonehenge and placed in the Aubrey Holes.  Are we, the taxpayers of this beleaguered land, supposed to finance all of this?

It really is quite wearisome, having to scrutinise yet another glossy magazine article devoid of any scholarly rigour, which is nothing more than a beautifully presented "quarry promotion exercise".

Why do I need to make the above points, when they should have been made by referees during a proper peer review process?  Why do magazine editors not insist on minimal academic standards in articles such as this?  So the prehistoric bluestone quarrying myth is promoted with ever-increasing vigour, even though there is no hard evidence in support of it either at Rhosyfelin or at Carn Goedog.

Are there no archaeologists in the UK who are prepared to stand up and point out that the Emperor is wearing no clothes?
Posted by BRIAN JOHN at 18:32

The closest that the Current Archaeology magazine gets to dissent from MPP's quarrying Ruling Hypothesis is on page 3, where the Editor, Dr* Matthew Symonds, in his very succinct short - paragraph "Welcome" (to his latest issue, Number 311, February 2016 - how "tempus fugits" when you're joining the Wild Goose Chase across Preseli!), he uses thw word NOTORIOUSLY thus:-

"The famous Stonehenge bluestones are notoriously well travelled. A link between these monoliths and Pembrokeshire has been suspected for almost a century, but recent excavations at two uotcrops in the Preseli hills have revealed prehistoric quarry works [!*!]. The geologies match, but radiocarbon dates suggest a lag - time of 400 years between extraction and erection in Wiltshire. Where were the bluestones in the interim?"

*Probably not a Doctor in Geomorphology, Glaciology, or Quarrying

Have you also had sight of Ixer & Bevins' article which follows MPP's, pages 23 - 24? Titled "Go West - the search for the bluestone quarries", I think this may be a good deal more prosaic and less controversial in your eyes.

Let me know if you'd like an old - fashioned photocopy by adding a further comment here, Brian.

Yes, I have a copy of the geology piece too -- thanks Tony. Shall do a post on this when I have a moment -- Myris will be every disappointed if I don't say a few rude words about it!

I thought it was basically very measured, and not on the same level of evangelical rumbustiousness as its preceding, Mike Parker Halelujah! Eureka! Pearson, article, which was considerably more All - Singing, All - Dancing in its level of infallibility. Nowhere does it even mention the Human Transport No - tion. Nice and objective?

It would appear that the climate of the Eastern Mediterranean encourages the common habit of leaving ones abode sans drawers/sound underpinnings?

The development of such Louche habits would appear to be quite impossible in the rigorous Welsh Climate!