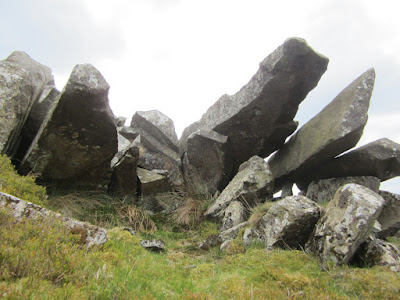 In a previous post I took a look at the new article by Parker Pearson and his colleagues on the "bluestone quarries".  As readers may recall, I was less than impressed.

We have to bear in mind here that "British Archaeology" is not a learned journal which publishes peer-reviewed papers.  It is an attractively produced magazine for popular consumption, designed (very successfully) to stimulate interest in archaeology.

I assume that the Editor, Mike Pitts, publishes what he wants to publish, invites articles from contributors, and guides authors through the publication process, with "easy reading" and "high impact" considerations to the fore.  So should we take its articles simply to be frothy and light-hearted resumes of learned work already published and subjected to peer-review?  That might be an ideal scenario -- but in the case of these "bluestone quarries" there has been no prior publication or peer review -- so this article is in effect a report of "new research" -- written and published by the MPP team in order to make maximum impact.  We therefore have every right to scrutinise it carefully, and to flag up its obvious shortcomings.  We should also examine the article in the light of the three other articles now in print on the subject of the so-called "bluestone quarries." 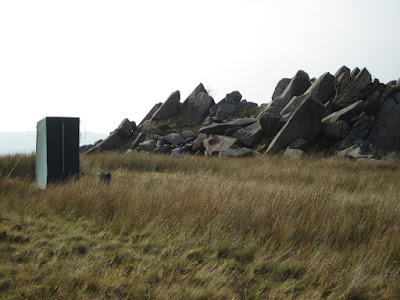 Having looked already at the part of the article that deals with Craig Rhosyfelin, here are my thoughts on the Carn Goedog section.

The section starts with in interesting and informative preamble on the spotted dolerites and their different locations, flagging up at least 3 different locations -- Carn Goedog (5 probably monoliths at Stonehenge), Cerrig Marchogion (2 monoliths) and some other as yet unknown sites (4 monoliths).

Once again (this is becoming a very bad habit), at the outset, it is stated that Carn Goedog is a quarry -- there is no attempt to assess whether the features examined are natural.  The authors describe "old quarrying traces" including drill holes.  They do not ponder on why recent stone collectors (looking for gateposts etc) would want to drill holes into the natural pillars and slabs......... and some of us consider that these relatively fresh features are more likely to be connected with geomagnetism work or petrological sampling work within the last thirty years or so.    Referring to the "pillars" at Carn Goedog, the authors say  "... the existing pillars are most similar in shape to the standing stones at Stonehenge..."  This is a meaningless statement, since the bluestones at Stonehenge, whether standing, leaning, fallen or buried, are highly variable  in their shapes and dimensions -- there is NO template or model.

It is stated that excavation revealed 3 fireplaces with charcoal, all dated to within the last 2000 years.  This is of course unsurprising since the southern flank of the tor is a perfect camping place and since the landscape hereabouts is littered with signs of Bronze Age and Iron Age occupation.  Quote:   "Beneath these layers we came across brown soils within and under a pavement of large flat slabs, many of them split with their split sides lying face-up."    So the fire sites were on a brown soil layer which incorporated large flat slabs.  There is nothing surprising there, since soils naturally develop around an irregular assortment of broken rock slabs, pillars and blocks of all sizes.  The authors do not demonstrate that their so-called "pavement" is man-made.  On the contrary, insofar as it can be called a "pavement" at all, it looks entirely natural.  It is an invention, like many of the "installations" at Craig Rhosyfelin.

Next, the authors refer to a "substantial recess"  from which slabs have been removed and / or split off from the rock.  This is in my view all fantasy -- there is nothing here which is inconsistent with natural processes and the results of glacial and periglacial processes on this degraded tor.   Great significance is attached to a metre of soil in a rocky recess, which contains traces of charcoal.  Again, it is absurd to suggest that this has any significance for quarrying activities. There are scores of pits and recesses with patches of peaty soil in them all over the tor.  Quote: "Soil from the recess contained a piece of charcoal dating to 2130-1900 BC, indicating that the pillars were removed at least 4,000 years ago."  In my view it is nonsensical to draw this conclusion -- the recess, like others all over the tor, could well have been there since the end of the Devensian -- or maybe even earlier.

Apparently, in the 2015 dig, a platform 5 x 8m in extent was revealed.  Quote:   "...........a drop of up to a metre along the edge furthest from the outcrop.  Just beyond the platform we found a pair of large slabs set lengthways on edge and about a metre apart. These form a classic trestle arrangement on which monoliths can be perched before being transferred to a wooden sledge. These slabs were set into a mass of densely and carefully packed smaller slabs and boulders that filled a small V-profiled ditch, 2m wide and 0.4m deep.  Beyond the ditch we found a platform of redeposited soil that formed a 5m-long ramp leading away from the quarry and curling northwards down the slope towards the valley in which Craig Rhos-y-felin sits. Among the cut features on either side of this ramp, one pit contained a small, fallen orthostat........."

This is all fantasy -- and examination of the site revealed nothing unnatural.  Again the archaeologists were all too clearly seeing what they wanted to see, not what was actually there.  Furthermore, none of this is adequately described or presented as hard evidence.  The photographic "evidence" is far from convincing, and all we have is assertions and suppositions.

Quote:  "The scale of neolithic monolith quarrying at Carn Goedog is impressive. A huge quantity of stone and soil was moved even before its many pillars were detached from the rock face. Working surfaces had to be prepared, a ditch dug to hold packing to support the stone trestles, and fallen debris cleared from the foot of the outcrop. By contrast, extraction of the pillars was relatively simple. A few of them display primitive wedge-marks, two examples well preserved where splitting had been unsuccessful. After they were split from the outcrop, the pillars could then be lowered with ropes, levered and pivoted across the stone platform onto the trestles and then eased onto a wooden sledge, to be slid downhill."   This is all a wonderful piece of storytelling, but there is no hard evidence to support any of it.   In other words, there is no evidence of prehistoric quarrying at Carn Goedog.

The photos of "wedge marks" are entirely unconvincing, since there are hundreds of such features on fractures in the dolerite, all over the tor.

All the dates show is that there was intermittent occupation here in the Neolithic, Bronze Age and Iron Age.  We knew that already -- these hillsides are littered with cultural features of many different ages.  The settlement below Carn Goedog is a very interesting one, incorporating 6 hut circles of unknown age.  Are they Iron Age / Roman?  Do they incorporate earlier features?

Also, this site has a long history of use in recent times -- particularly in connection with the droving trade between c 1750 - 1850.

Conclusion (quote):
"Somewhere, on the land between the bluestone quarries, we think there is a passage tomb, formerly built of bluestones, waiting to be investigated. Could this have been a tomb for the ancestors that was dismantled and moved to Salisbury Plain, the tangible history of a Welsh neolithic tribe carried to their new homeland in one of the most extraordinary journeys of prehistoric times? Only time will tell."

My assessment of this section of the article:  Once again, it is based entirely on assumptions, unsupported assertions and speculations, with no serious attempt made at any stage to describe features or sediments carefully prior to scientific analysis and interpretation. This is not science -- but I suppose, in defence of the authors, it does not claim to be science.

The "quarrying hypothesis" is not enhanced by this article.  Indeed, it is considerably harmed by it.  The "engineering features" owe nothing at all to human intervention.  What we actually have here is another interesting demonstration that there is a long history of intermittent occupation of this landscape in Bronze Age and later times -- but we knew that already.