Any day now, the first of our articles about Rhosyfelin will be published.  Among the key landscape features described are the meltwater channels -- one big one, containing the Afon Brynberian river, and the smaller (subsidiary) one within which the 2011-2015 archaeological dig was conducted.

You have seen enough pictures of these channels already, but here are some nice analogies to assist in interpretation.  Below I have added three photos of smallish meltwater channels in West Greenland, not far from the ice sheet edge. 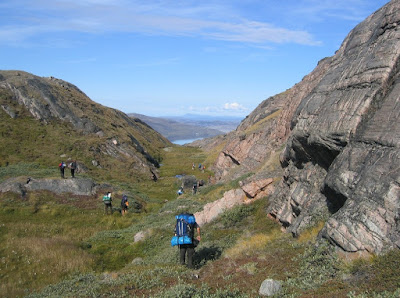 This channel is quite large -- on a par with the valley of the Afon Brynberian.  Here there is no sandur (outwash plain) on the valley floor because modern drainage has been diverted away into some other route.  On the channel floor there is rocky debris and scrub vegetation.  Note the valley walls on the right -- there are clear signs of smoothing and moulding.  It is difficult to say whether these features are glacial or fluvioglacial in origin -- probably a range of processes have been in operation. 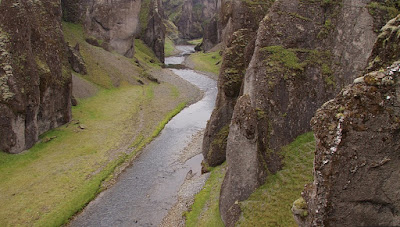 This small channel still has a stream (albeit a misfit) flowing within it.  But it was cut at a time of much higher meltwater discharge.  Note the accumulations of rockfall debris and scree banks along parts of the valley wall -- in the middle distance this material is mixed with fluvioglacial and fluvial deposits on the valley floor.  There are obvious parallels with Rhosyfelin. 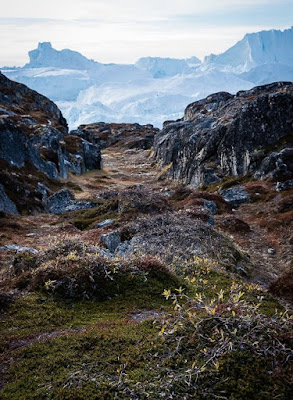 This is another abandoned meltwater channel close to the west Greenland ice edge.  There is no sign of recent meltwater flow within it, but on the channel floor there is a lot of rocky debris, some of which has come from rockfalls. (Some might also be derived from ice wastage.)
Posted by BRIAN JOHN at 14:50