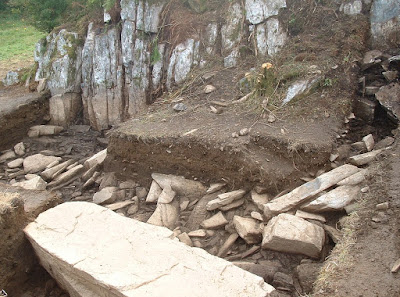 This has just gone off in various directions: my guess is that the media will ignore it, since hard science is really rather boring, and since jolly fantasies are much more fun.......

Research published today in the peer-reviewed journal "Quaternary Newsletter" throws serious doubt on claims that there is a Neolithic "bluestone quarry" at Rhosyfelin in Pembrokeshire.

Since 2011 archaeologist Prof Mike Parker Pearson and his colleagues have conducted annual summer digs at the site, not far from the village of Brynberian, and they have promoted the idea that some of the rhyolite bluestones at Stonehenge were quarried here and then carried all the way to Stonehenge by Neolithic tribesmen about 5,000 years ago.  In 2012 Parker Pearson referred to the site as "the Pompeii of prehistoric stone quarries."  His theory arose from some  precise "provenancing" by geologists Richard Bevins and Rob Ixer, who discovered that some of the fragments of rock in the soil layers in and around Stonehenge could be matched closely to a flinty blue foliated rhyolite rock exposed in a crag at Rhosyfelin.  The archaeologists also discovered an eight-tonne elongated slab of rhyolite close to the Rhosyfelin rock face, which they assumed had been quarried and then somehow left behind.  Many tonnes of sediments have subsequently been removed by the archaeologists in their hunt for quarrying traces.

Now geologist John Downes and geomorphologists Dyfed Elis-Gruffydd and Brian John have examined the site very carefully, and have come to the conclusion that there are no traces of a Neolithic quarry here.  Instead, they interpret the rocky debris found during the archaeological dig as entirely natural accumulations resulting from intermittent rockfalls over a long period of time.  In their new article they also describe a number of different landforms and sediments which can be related to the events of the Ice Age -- and in particular to the last glaciation of this area which occurred around 20,000 years ago.  They accept that there might have been a prehistoric camp site in the sheltered valley at the foot of the Rhosyfelin rocky crag, and that this may be confirmed by radiocarbon dating, but they suggest that the site was used by hunters rather than by quarrymen.

Back to the glacial transport theory.......

Speaking about the new study, researcher Dr Brian John said:  "We have no argument with the geological work that links this site with Stonehenge.  But we cannot accept the idea of a Neolithic quarry here without firm evidence -- and in our considered opinion there is none.  The archaeologists admit that there are no artefacts, bones or tools at the site.  In a future paper we will examine the so-called "quarrying" or "engineering" features at this site, and will show that they are all natural.

"We are also increasingly convinced that the rhyolite debris at Stonehenge is derived from glacial erratics which were eroded from the Rhosyfelin rocky crag almost half a million years ago by the overriding Irish Sea Glacier (Britain's biggest ever glacier) and then transported eastwards by ice towards Salisbury Plain.  Glaciologically that was perfectly possible, if not probable.  We are confident that radiocarbon and other dating in the future will confirm the falsehood of the Neolithic quarry theory and the essential reliability of the glacial transport theory." 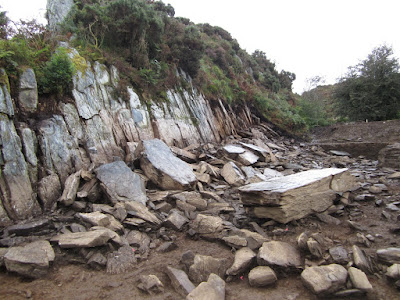 Reminscent of , “I really do not see the signal “

“We are confident that radiocarbon and other dating in the future will confirm the falsehood of the Neolithic quarry theory and the essential reliability of the glacial transport theory."

How can RC at dating at CrF possibly confirm either of these contentions ?

Radiocarbon AND other techniques, when used properly, will give us a lot more info -- it's all about sampling techniques and context. Wait and see. Things are afoot.

But RC dating when used properly , can't confirm the non existence of a putative quarry or the reliability of a glacial theory .

That's not what I said. I talked about a range of techniques, carefully used, in a wide range of different locations. Nothing will give certainty, but we can get rather closer to the truth than we are at the moment......

The only type of dating you specified was RC dating i.e. “We are confident that radiocarbon and other dating " ,and as I said "RC dating .... , can't confirm the non existence of a putative quarry or the reliability of a glacial theory .

oooops ,should have added that the RC dating can't confirm the non existence of a putative quarry or the reliability of a glacial theory , even in conjunction with other techniques .If the others can , then they don't need the RC and if they can't ,them RC dating won't change anything in relation to the two points .

Worth reading, Brian and all, the very provacative (especially to a glacial geomorphologist, I would imagine!) conclusion in MPP's 2013 article entitled "Researching Stonehenge: Theories Past & Present"

Yes, familiar with that, Tony. The caption to Fig 7 says it all.... "Excavation of the Craig Rhos-y-felin rhyolite monolith quarry in Pembrokeshire, Wales." So that's all settled then.....

I suppose that the Allen / French article will be mostly about those greatly beloved periglacial stripes.

Incidentally, I have not been able to track down the actual publication of the "forthcoming" (in 2013) Oxbow publication, "Stonehenge For The Ancestors". I wonder why not?

"....making the quest for the purpose of Stonehenge exactly what archaeology should be - the excitement of potential possibilities, the triangulation of multiple lines of evidence, THE NOT - KNOWING WHERE THE EVIDENCE WILL LEAD, and, most importantly, the fun of working with skilled and inspirational colleagues."

We might add, he does all this within his Ruling Hypothesis, closed to any potentially exciting and game - changing contributions from Glacial Geomorphologists. He talks elsewhere of struggling to identify an elephant if he has his eyes blindfolded and he may only touch certain parts of the elephant's anatomy!! And I'm not at all impressed at his claims to possess "the trangulation of multiple lines of evidence". One of the most important specialists he ought to have on board his ship is at least one Glacial
Geomorphologist.As I've said many times before, he makes the concept of multi - disciplinary University research into a nonsense, and he lets down all his "skilled and inspirational colleagues" that he HAS got on board in the process.

Call me naive and not worldly - wise, but I am reasonably competent in my use of the English language, and, in my ignorance, have always thought that the root of "Universe" is the same as that of "University". University Departments should be working together in an inter - disciplinary manner on all things Stonehenge. MPP and his associates are only pretending to have this truly inter - disciplinary approach. Shame on them.