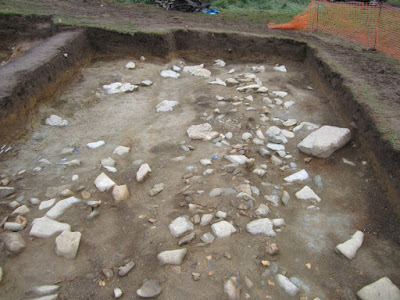 This is the new pit at Rhosyfelin, out on the valley floor.  Having heard that this pit (and the old one, presumably) would be filled in today, I just happened to be passing this morning, and popped in to take some pics before everything disappeared.

This is the "old ground surface" which is being dated as 7,500 years old. It is the upper surface of the clay-rich till and other sediments which underlie the foxy red iron-stained horizon.  We don't know how many stones have been taken away by the archaeologists -- but in the middle of this little lot, Prof MPP claims to be able to see a curving "routeway" along which bluestone orthostats from his beloved quarry were trundled on their way down the valley (northwards) and thence towards Stonehenge.  If you can see a trackway here, you are a better person than I.

According to the gospel story, this trackway is connected to a "loading platform" and a quayside and revetment, just to the left off the edge of the photo.  This is what the latter features look like in reality: 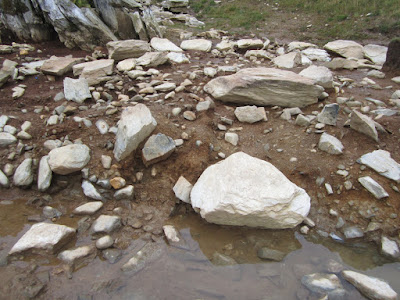 This is the "revetment" or quayside -- the big boulder at the water's edge was supposedly put into position by the quarrymen, as part of the facility to make loading (onto what?) easier.  The huge boulder lying flat on the surface of the glacial sediments was supposedly a part of the "loading platform" where orthostats were assembled prior to despatch.  No comment.

No doubt it will be rather a relief to the archaeologists that by now this whole scene will have been buried as they put all the spoil back into position, making further scrutiny by sceptics like me quite impossible.....
Posted by BRIAN JOHN at 09:57