Rhosyfelin -- the glacial transport theory is alive and well 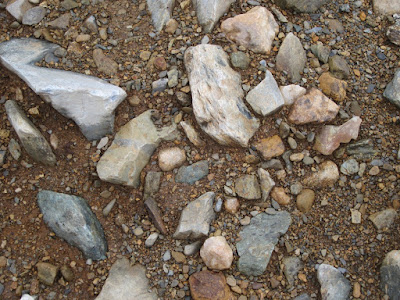 A Devensian till exposure at Rhosyfelin.  There is the little matter of glaciation to be considered......

Apparently the work at Rhosyfelin is done, and the archaeologists will be filling the dig holes in tomorrow and restoring the site.  That's a pity, since there is still a lot of useful geomorphology that could be done if the sediment exposures had been left accessible.  Ah well, future explorers of the site will have to dig their own holes.

After five years of intense excitement, we come away with NOTHING that compromises the glacial transport hypothesis.  The foliated rhyolite provenancing work is interesting, but is irrelevant as far as the bluestone transport debate is concerned.

What we now know is that there has been occupation of the site intermittently since the Mesolithic, but none of that occupation can be tied to quarrying activity, and there are no tools, artefacts, antlers, shoulder blades or hammerstones which can be cited as evidence of quarrying or digging activity.  We have already dealt with the fantastical features described by Prof MPP in his lectures, including fulcrums, pivots, props, railway lines, platforms and working floors, packing materials, revetments and quaysides, worked rock faces, ramps and trackways, and scratches created by stones being dragged along.  They are all figments of somebody or other's rather fertile imagination, and on examination they are all seen to be completely natural and unsurprising -- and even boring and commonplace.

As for the radiocarbon dates, they confirm intermittent occupation and burning (either in camp fires or for woodland clearance) but they do nothing else.  They seem to be isolated in the sense that they cannot be tied incontrovertably to specific activities.  They are certainly interesting and important for the elucidation of a settlement history, but they do NOTHING to support the idea that there is a QUARRYING history here.

So after all the sound and fury, I still think that large chunks of the Rhosyfelin crags were entrained by over-riding ice, probably during the Anglian glaciation, and sent on their way towards Stonehenge without any assistance from our Neolithic friends.  I thought MPP was completely wrong in 2011, and I still think he is wrong in the extraordinary story he has fabricated for this site.

What we have here, I think, is a classic example of a group of fieldworkers moving in on a site with a pre-formed or predetermined ruling hypothesis, and then spending four years describing what they expected to see, in rather colourful terms, while failing to describe calmly and rationally what they were actually looking at.  It could all have been so different, had they bothered to include a glacial geomorphologist in their digging team or even in their group reviews of progress.  Instead of that, they have apparently spent their time in a bubble, impervious to sage advice from outside, freely given, by me and a lot of other people who actually do know what they are talking about.  Should we blame a National Geographic funding contract for at least a part of this situation?  I suspect so........ since in the media all that matters is a good story.
Posted by BRIAN JOHN at 23:18

Does the radiocarbon sequence suggest a gradual filling of the depression north of the rock? Not so gradual if big lumps of rock come tumbling down after a Bronze Age date. The simple list of dates seems to imply that they are spread throughout the sequence.

How does this fit with a post glacial fill explanation? This would entail many rocks and solifluxion deposits being in place soon after the glacial period and a rather slower rate of accumulation, generating a shallower deposit afterwards.

Is there any indication that the glacial origin deposits in the depression were truncated in parts by human activity associated with these dates? Not forgetting that radiocarbon dates don't necessarily mean that human activity actually caused them.

Sounds like we have to go back to the stratigraphy, that Brian enjoys so much.

Dave -- we know that there are at least 20 radiocarbon dates for this site. But the good Prof did not show a table of them, and we do not know how they are distributed in the stratigraphy, or spatially across the dig site. All we know is that they range between Mesolithic and Bronze Age -- I suppose the archaeologists were hoping for a strong cluster of Neolithic dates, to confirm the "Neolithic bluestone quarry" hypothesis -- but it clearly didn't work out like that.....

Our paper will be published soon, and that will explain the stratigraphy in much more detail.