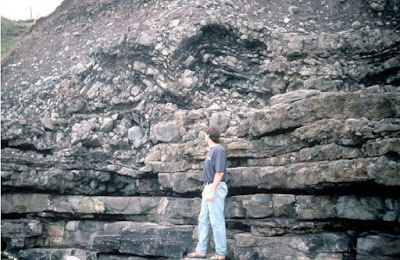 This is a fascinating photo from the new QRA publication listing "the top 50 Quaternary sites" in the British Isles.  It's from Inishcrone, in County Sligo in Ireland.

Conventionally, the entrainment of rock slabs on the base of a glacier is assumed to involve two basic processes:

first, a compression process on the glacier bed where high stresses are placed on a vulnerable rock surface which is partly under compression and partly under tension.  That leads to the fracturing of the rock.

The point at which the one process gives way to another is the point at which pressure is released on the glacier bed, and where a film of meltwater on the bed gives way to refreezing.  This is the classic explanation of why and how roches moutonnees are formed.  See many entries in this blog on precisely that topic.

In other situations we know that super-erratics can be incorporated into the bed of a glacier by shearing on a huge scale.  For example, slabs of chalk over a kilometre long have been known to be incorporated into glacier beds because of the massive pressure exerted by thick ice and because of the peculiar circumstances associated with the shear stresses on permeable glacier beds.  Complex physics and rock mechanics.......

The Inishcrone example is fascinating, because it shows yet another entrainment process.  Here, it appears that loosely-jointed limestone beds have actually been bull-dozed by the over-riding ice, giving rise to folding or buckling structures and then the complete elimination of the original stratification of the beds as they are literally smashed up.   Much more information here: