I came across this interesting article by Dyfed Elis-Gruffydd in the Welsh Stone Forum Newsletter, which contains lots of other interesting things as well -- if you happen to be interested in stone types and where they came from.  The article reiterates the point made by many others -- including me -- that in prehistoric times there was no special reverence for spotted dolerite.  Indeed, its hardness may have rendered it pretty useless to prehistoric people -- they could cut and shape softer rocks much more easily.   And I love that little poem......

There is little or no field evidence to suggest that the so-called
‘spotted’ dolerite or ‘bluestone’, which outcrops in
the vicinity of the Carn Meini–Carn Gyfrwy–Carn Breseb
tors at the eastern end of the Presely Hills, was used either
extensively or preferentially by late Neolithic-Bronze age
and Iron age communities for the construction of burial
chambers, stone circles and standing stones in north
Pembrokeshire. Indeed, with respect to the Gors Fawr
stone circle that lies less than 3.5 km south of Carn Meini
(SN 143324), Aubrey Burl, author of A Guide to the Stone
Circles of Britain, Ireland and Brittany (Yale University
Press, 2005), notes that only one ‘bluestone’ was chosen
by the ‘Bronze age builders among the fifteen other glacial
erratic boulders of the circle’.

However, it does appear
that somewhat greater use was made of the stone, together
with pillars of ‘unspotted’ dolerite and other locally sourced
intrusive and extrusive igneous rocks, during the
medieval period and particularly between the 5th and the
9th century, for several of the ogam and early inscribed
stones of the area are of ‘spotted’ dolerite (see Edwards,
Nancy, A Corpus of Early Medieval Inscribed Stones and
Stone Sculpture in Wales, Volume II, South-West Wales,
University of Wales Press, 2007).

Field evidence suggests that the greatest use of ‘spotted’
dolerite dates from the late C18th and C19th. In his
Welsh-language article entitled ‘Cerrig Llwydion Carn
Meini’, published in Y Gwyddonydd in 1966, O.T. Jones
(1878–1967) recorded 52 such stones, derived from the
vicinity of Carn Meini, in the Cardigan and Y Ferwig area
and ‘ugeiniau yn rhagor’ (scores more) in and around the
village of Eglwyswrw. Furthermore, he added that some
of the older local inhabitants interviewed were able to
confirm that many of the joint-bounded and frost-riven
pillars – destined to act as gateposts, in the main – were
dragged from Carn Meini within living memory with the
aid of a car llusg (drag, sled).

Although tors such as Carn Meini and Carn Breseb yield
ready-made pillars, ‘spotted’ dolerite is very difficult to cut
and dress on account of its hardness and hence has not been
used as a general building stone. Indeed, its only known
use in the Presely area is as a facing stone employed to
dress – in their ‘Sunday best’ – the gable front of two Welsh
Nonconformist chapels, viz. Cana Independent Chapel
(1856–7), Felindre Farchog (SN 100390), and Bethel
Baptist Chapel (1875–7), Mynachlog-ddu (SN 145304).

In the case of Cana, the squared, hammer-dressed blocks
of ‘spotted’ dolerite of the façade are in marked contrast
to the rough-hewn blocks of slaty mudstone of the Ashgill
age Nantmel Mudstone Formation (Ordovician), derived
from the small defunct quarries of nearby Cwm-gloyn
(SN 103394) and used to construct the rubble walls of
the remainder of the building (Figs 1 & 2). The contrast is
no less marked in the case of Bethel, although the slaterubble
walling – probably derived from Chwarel Dyrch, a
former roadside slate quarry, within the Arenig age Foel
Dyrch Formation (Ordovician), about a kilometre south of
the chapel – has been cement rendered (Figs 3 & 4). The
restriction of the ‘Sunday-best’ treatment to the façade
is a common, money-saving feature of Welsh chapels,
which prompted an anonymous rhymester to compose
the following apposite doggerel quoted in Welsh Chapels
(Alan Sutton Publishing, 1996) by Anthony Jones:

The Trellwyn Methodists have built a church
The front looks like an abbey,
But thinking they could fool the Lord
They’ve built the back part shabby.

The precise provenance of the ‘spotted’ dolerite is not
known although that used to dress the front elevation of
Bethel probably came from nearby Carn Meini. 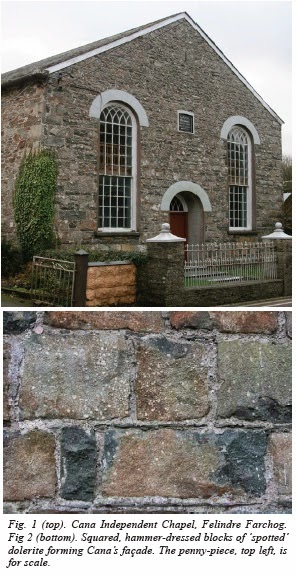 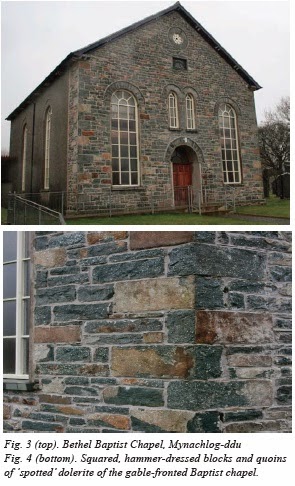