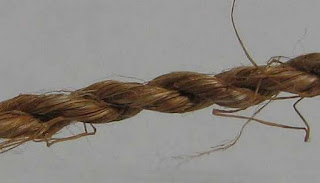 Now here's a thought.  All of the human transport technologies are dependent upon the existence and plentiful supply of rope -- often in great lengths.  It appears that rope has been around for a long time -- in short lengths -- and maybe of questionable strength.  It could be made with vegetable fibres or animal products --  see below.  The technique is well known too -- slow, laborious and fun for an amateur experimental archaeologist or self-sufficiency freak, but adequate for production on a semi-industrial scale?

SO what evidence is there that really strong ropes, in sufficient quantities for hauling large numbers of very large stones either over land or sea, actually did exist in the Neolithic?

The use of ropes for hunting, pulling, fastening, attaching, carrying, lifting, and climbing dates back to prehistoric times. It is likely that the earliest "ropes" were naturally occurring lengths of plant fibre, such as vines, followed soon by the first attempts at twisting and braiding these strands together to form the first proper ropes in the modern sense of the word. Impressions of cordage found on fired clay provide evidence of string and rope-making technology in Europe dating back 28,000 years.[3] Fossilized fragments of "probably two-ply laid rope of about 7 mm diameter" were found in one of the caves at Lascaux, dating to approximately 15,000 BC.[4]

The ancient Egyptians were probably the first civilization to develop special tools to make rope. Egyptian rope dates back to 4000 to 3500 B.C. and was generally made of water reed fibres[5]. Other rope in antiquity was made from the fibres of date palms, flax, grass, papyrus, leather, or animal hair. The use of such ropes pulled by thousands of workers allowed the Egyptians to move the heavy stones required to build their monuments. Starting from approximately 2800 B.C., rope made of hemp fibres was in use in China. Rope and the craft of rope making spread throughout Asia, India, and Europe over the next several thousand years.

In the Middle Ages (from the 13th to the 18th centuries), from the British Isles to Italy, ropes were constructed in so-called Ropewalks, very long buildings where strands the full length of the rope were spread out and then laid up or twisted together to form the rope. The cable length was thus set by the length of the available rope walk. This is related to the unit of length termed cable length. This allowed for long ropes of up to 300 yards long or longer to be made. These long ropes were necessary in shipping as short ropes would require splicing to make them long enough to use for sheets and halyards. The strongest form of splicing is the short splice, which doubles the diameter of the rope at the area of the splice, which would cause problems in running the line through pulleys. Any splices narrow enough to maintain smooth running would be less able to support the required weight.

Leonardo da Vinci drew sketches of a concept for a ropemaking machine, but it was never built. Nevertheless, remarkable feats of construction were accomplished without advanced technology: In 1586, Domenico Fontana erected the 327 ton obelisk on Rome's Saint Peter's Square with a concerted effort of 900 men, 75 horses, and countless pulleys and meters of rope. By the late 18th century several working machines had been built and patented.

Some rope continues to be made from natural fibres such as coir and sisal, despite the dominance of synthetic fibres such as nylon and polypropylene which have become popular since the 1950s.

http://www.instructables.com/id/Make-rope-out-of-dead-plants----with-no-tools/?ALLSTEPS
Posted by BRIAN JOHN at 12:59

You raise a very valid point, Brian. Has anybody thought through carefully the length and strength of the ropes needed to move megaliths? And the resources and technology available to make massive amounts of ropes? Even if these were possible, certainly ropes would represent a valuable resource for the prehistoric people with many other more practical and important uses of these to help them survive.

Yet another point showing human transport just does not make sense.

Kostas,
there is a very long thread I read recently on www.themodernantiquarian.com which was partly about ropes. It dates to 2008 I think. Maybe Brian has an exact link handy as he contributed.

There were several experiments done, and I recall there is a person in Scandinavia who has been recreating ropes using the original materials. Again, as I recall, the main issue was more about coordinating large numbers of people pulling on ropes than about the ropes themselves.

In my mind there is little doubt that "rope technology" was used in those days - many heavy logs were shifted to build things like Woodhenge and ropes would have been used to manage animals and for many other purposes.

Hope this helps you find the way.

Dear Brian,
Interesting things ropes, but perhaps we should look at them in context.
Aubrey Burl, 'A Brief History of Stonehenge' page 234 & 235, carries out some basic calculations on smoothing and shaping the sarsen stones, and comes to the conclusion that it would have taken eight people working for ten hours per day almost 400 man hours to shape a single upright. He estimates the total time to shape the sarsens to have been "three or more years of literal and metaphorical hard labour". When you factor in curving the lintels, tongue and groove joints plus mortice and tenon joints, the number of years could possibly be doubled.
If they were prepared to expend that amount of time on the cosmetics of the structure then they would probably have been prepared to allocate sufficient labour to rope construction, with the manufacture of rope probably being sub-contracted to specialist teams for continuous production.

However, I don't think the ropes would have had to be of any great length, our trials have shown that a pulling team of eight men could transport a four ton bluestone operating as four teams of two, with the four ropes being no longer than five metres.

Incidentally,the two ton inverted tree stump of 'Seahenge' still had a length of twisted honeysuckle rope attached to it when excavated, (Francis Pryor, Seahenge, a quest for life and death in Bronze Age Britain, facing page 244).

Yes, an interesting field. I had seen that report of the Bronze Age rope fragment. This is a topic about which I know virtually nothing, so am looking for enlightenment.....

Cro-magnon's made ropes in France 28,000 years ago - the oldest piece surviving in Britain was found with the Solent boat dated 6000BC.

Its not the material that gives it the strength but the quantity and twisting of the fabric - so the larger the object the thicker the rope - medieval boat ropes are a good example, cheap but thick.