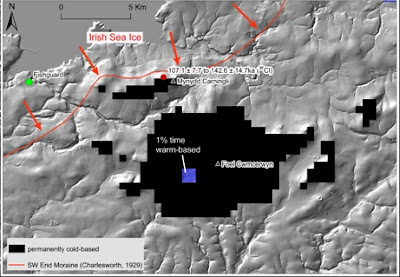 I have drawn attention to the excellent work being done in Aberystwyth and elsewhere on ice cap and ice sheet modelling.  I came across this interesting reconstruction for the extent of the Preseli Ice cap at the peak of the Devensian Glacation -- around 23,500 years ago.   The authors (see below) suggest that the ice cap made brief appearances (for example around 25,000 yrs BP) and then grew to this extent around 23,500 yrs BP.  Its life span might have been 2,000 years at the most.  Notice that the ice is assumed to have been permanently cold-based, which means that it will have done very little to affect the landscape -- its role will have been largely protective. The authors assume that the whole of the Preseli ridge -- including all of the tors around Carn Meini etc -- was submerged beneath the ice.
If this model is correct, it means that Pont Saeson and Craig Rhosyfelin will have been very close to the northern edge of the little ice cap at the time of its maximum extent. This means that when the ice cap melted -- possibly catastrophically over a few centuries -- there will have been a very large volume of meltwater rushing along the gorge of the Afon Brynberian towards the confluence with the Nevern Valley.

A indicated in earlier posts, I'm not entirely happy with this model and its portrayal of the Irish Sea ice edge, but this is after all a computer-generated MODEL -- so it will be interesting to see how far the model and the hard evidence on the ground happen to converge........

Source:
Henry Patton, Alun Hubbard, Neil Glasser, Tom Bradwell, Nick Golledge:  "Modelling the dynamic instabilities of the British-Irish Ice Sheet: The Welsh Ice Cap"
If you want to look at the animations created over the past few years, click on the links below and you should be able to download them.

A better quality animation of the modelling experiment can be viewed/downloaded on this page.

Thanks Henry -- if that link doesn't work, it's here:

I've transferred the model output into Google Earth. Any interest to you or your readers?

The post can be found here, along with a file to download and use offline. Google maps seems to be a bit temperamental so you may need to refresh if it doesn't connect straight away.

been trying this on Google Earth -- it seems to work most of the time, although it is sometimes reluctant to continue in the shrinkage phase. Have you tried putting the animation onto YouTube? That would make it far more accessible.....