Glaciation of Carningli -- a dating problem 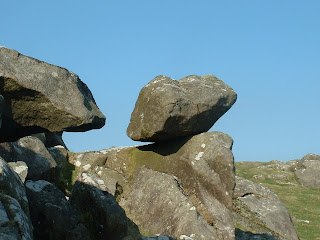 Perched block on Carn Edward, one of the sampled sites supposedly outside the Devensian ice limit


Now then.  We have a problem.  These are the cosmogenic dates published by McCarroll et al in 2010:

Geomorphological evidence (Catt et al., 2006) indicates that the
eastern LGM limit of the ISIS lay along the north Pembroke coast
(Fig. 1). East of the proposed ice limit, the western Preseli Hills
(Mynydd Carningli) show no evidence of glaciation, and the landscape
is dominated by tors rising above autochthonous blockfields
(Walker and McCarroll, 2001). Closer to the coast, however, rocky
knolls are conspicuously ice-scoured and glacial deposits derived
from the Irish Sea basin are widespread (Hiemstra et al., 2005).
Three samples collected from basaltic tors on the west Preseli Hills
(MC-01, MC-02, MC-03) all yielded minimum 36Cl ages >100 ka
(Table 3), consistent with the inference that this area escaped
glaciation during the LGM. Two samples (CF-01, CO-01) from icemoulded
outcrops on coastal headlands just within the proposed
glacial limit produced 10Be ages of 35.3   3.6 to 38.0   4.8 ka and
33.4   3.6 to 35.9   4.7 ka and two further samples (PF-01 and PM-
01) gave 36Cl ages of 33.5   2.6 ka and 76.8   7.2 ka. Although three
of these ages are internally consistent and all are significantly
younger than those obtained from the Preseli tors, all are significantly
older than the LGM, and thus conflict with the geomorphological
evidence for over-running of the north Pembroke coast
by the ISIS during the LGM. We infer that all four ages are
augmented by nuclide inheritance due to insufficient removal of
bedrock by glacial erosion, and thus provide no information on the
timing of ice retreat.

Now I don't like to argue with senior academics, but something is wrong here.  Admittedly the authors of the paper do not know the territory as I do, but to say "East of the proposed ice limit, the western Preseli Hills (Mynydd Carningli) show no evidence of glaciation" is simply wrong.  As I have shown on a number of the posts on this blog,  Carningli supports abundant evidence of glaciation -- and relatively recent glaciation at that.  There are multiple ice-smoothed slabs and other rock surfaces, perched blocks, a moraine ridge near Pont Ceunant, lateral morainic ridges on the NE face of Carningli, and a thin spread of till with many sub-rounded boulders and cobbles on the eastern flank of the mountain.  These features can only be explained by glaciation during the Devensian, with all but the highest part of Carningli inundated by ice -- even if the ice cover lasted only for a few centuries or decades.

"Three samples collected from basaltic tors on the west Preseli Hills......"  Hm.  Sorry guys, but there are no basaltic tors here at all -- they are all made of rhyolite, dolerite and assorted complex volcanic deposits related to the Fishguard Volcanic series.  No basalt.


And the dates themselves are very confusing.  The dates from the coastal areas west and east of Fishguard (inside the LGM ice limit) come out at between 32,000 and 77,000 years BP, with quite large margins of error.  The grid references are not adequate to locate the sampling points with any precision -- so we do not know what likelihood there may have been for snow protection or vegetation protection -- maybe for prolonged periods in the past.  We will not dispute the assumption that all these sampling points WERE glaciated during the Devensian -- but the dates tell us nothing about when the ice arrived, when it melted away, and how much erosion there might have been on the sampled rock surfaces.

The three dates from Carningli Common (Carnedd Fychan, Carn Llwyd and Carn Edward) are even more confusing, since they all show dates in excess of 100,000 years.  As indicated above, the sampling points (like those nearer the coast) WERE glaciated during the Devensian.  So why are the "exposure ages" so much greater?  It might be reasonable to assume that there would have been more glacial erosion, over a greater period of time, near the coast than near the top of the Carningli upland ridge -- so all I can assume is that the dates are highly misleading, and that they simply show us some sort of "nuclide inheritance" as suggested by the authors.  Might the dates reflect very old weathered rock surfaces from which maybe 10mm of rock has been removed by erosion near the coast, with maybe 1 mm of rock removed from the rock outcrops near the crest of the Carningli ridge?

An interesting puzzle....  I need advice from somebody who understands cosmogenic bombardment and penetration into rock surfaces of various types!

Lots of data here, for a non-geomorphologist like me to absorb. All very interesting and relevant. Please help me clarify one point, however, that I think the data may be showing.

“... the western Preseli Hills (Mynydd Carningli) show no evidence of glaciation, and the landscape is dominated by tors rising above autochthonous blockfields (Walker and McCarroll, 2001). Closer to the coast, however, rocky knolls are conspicuously ice-scoured and glacial deposits derived from the Irish Sea basin are widespread (Hiemstra et al., 2005).”

Not knowing the territory referenced it's hard to know for sure what this data means. But does it indicate that though there is evidence of glaciation near and along the coast, there does not seem to be on higher elevations at Preseli Hills?

Of course I understand your dilemma if that is the case. Since in your view the glaciers came down to the coast overriding Carningli. Am I understanding this quote and your position right? Or am I once again plain off the mark.

Kostas -- this is all part of my attempt to work out how extensive the Irish Sea Glacier might haver been in the glaciation that culminated around 20,000 years ago --and indeed whether the ice might have crossed Pembrokeshire and extended further south and east. As you see from the post, I agree with the authors of this dating paper that the ice did cross the Pembrokeshire coast and that it did NOT cross the higher land of the Preseli Hills. the debate centres on this question: How far inland did the ice extend? My best attempt at a line was published on this blog a few days ago.

I think you misunderstand the ice direction. The ice did not come down to the coast from the uplands -- it travelled in from the sea and climbed up over the coastal uplands! I show this with the arrows on many of my posts about the Irish Sea Glacier. Bear in mind that the only thing that matters with big glaciers is the ice surface slope. This surface slopes down from the accumulation area to the snout -- the shape of the land on the glacier bed is more or less immaterial.