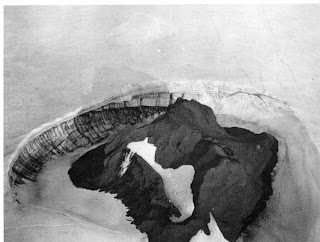 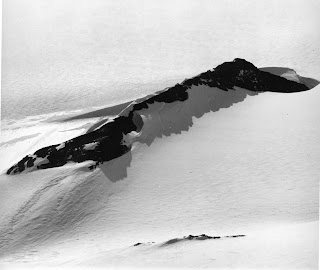 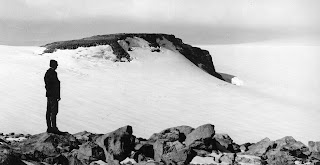 So what did the Carningli Nunatak look like at the peak of the Devensian glaciation, around 20,000 years ago?  Something like this.  These photos, two from Iceland and one from Antarctica, show what happens when a mountain peak just projects through the ice surface.  Sometimes no ice is visible -- and all one sees are extensive banks of snow piled against the rocky flanks of the nunatak.  But very often there will be a windscoop or an ablation hollow or "moat" around the nunatak, caused by heat absorption and enhanced melting around the dark rocky surfaces.  Once the ablation hollow is formed, and if ice movement is too sluggish to close it, wind eddies may be sufficient to blow away new powder snow, thereby keeping the moat open.  Sometimes there may actually be water in the moat, as we see today around some of the nunataks in South Greenland.
Posted by BRIAN JOHN at 20:58