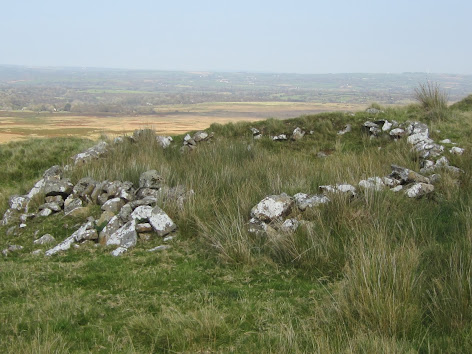 SUMMARY A possible sheepfold situated on a northwest facing slope of Banc Llwydlos at 250m above sea level, lying to the east of a stream.

LONG DESCRIPTION A possible sheepfold situated on a northwest facing slope of Banc Llwydlos at 250m above sea level, lying to the east of a stream. It is sub-circular in shape and of dry stone construction whose walls survive to between 4/5 courses high. The enclosure has an approximate diameter of 8.9m. There is an entrance on the west (facing the stream) measuring 1.2m wide. It is possibly a later re-use of an earlier structure. It was recorded by P Drewett in 1984 during field survey and listed as ‘hut cluster (circular stone huts)’ (site no 109).
Depicted as 'sheepfold' on OS County series Pembroke. XI.9 1889 & as 'old sheepfold' on 2nd edition (1907).
I'm not at all sure that this ever was a sheepfold -- the walls are nowhere near high enough to keep sheep on the inside -- and even if they have collapsed, where are the fallen stones?  And it would have been stupid to have the entrance on the west side, so close to the stream -- driving sheep in would have been a nightmare.  So I think it was originally a roundhouse in a very desirable location, on a dry bank very close to a permanent water supply.  Indeed, the eastern part of the walled structure is turf-covered, and there are signs of another semi-circular embankment outside the one visible in the photo above.  So I think it/s prehistoric rather than medieval -- but no excavations have ever been conducted here.
---------------------------------------------
(2) Collapsed cromlech
I am so convinced by this one that I have not even bothered with a question mark!  It's a small and rather primitive structure about 500m north of the previously mentioned structure, and about 100m from the same stream.  Grid reference:  SN 096333.  It's on the edge of a dry bracken patch, on a small grassy bank with an undulating surface.  There is a clear circular arrangement of stones, c 6 m across.  There are 23 small stones around a slight hollow, with two "stone clusters" on the southern edge.  On the west side of the hollow there are two much bigger stones, one that appears to be a leaning support stone, c 70 cm high, and a fallen capstone which has the dimensions 1.3m long x 70cm wide x 30cm deep.
I have not been able to find any record of this feature, and will welcome some opinions from others who might like to examine it.......
The circular arrangement of stones suggests that there might have been a small covering earth mound -- but it might also have been a "sub-megalithic" burial chamber with just one edge of the capstone supported. 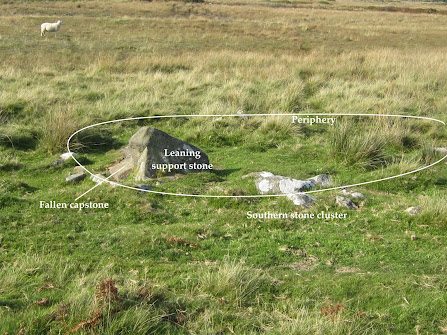 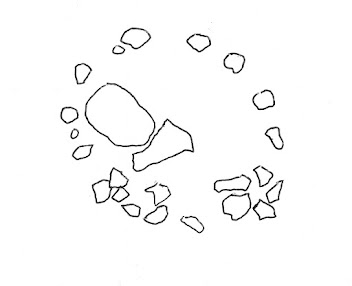 Rough plan of the feature
Posted by BRIAN JOHN at 22:06