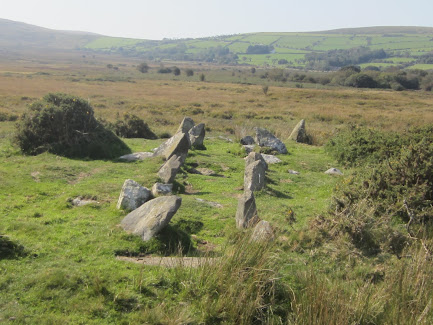 Today, in glorious sunshine with hardly a breath of wind, my wife and I enjoyed a walk on Brynberian Moor (Waun Brwynant).  We had our picnic lunch at Bedd yr Afanc, which I have described before.

Now I am quite convinced that the bedrock on the slight ridge (on which the grave of the fearsome monster is located) is rhyolite, which looks remarkably similar to that of Rhosyfelin.  The geology map confirms this, showing Fishguard Volcanics for some distance south of Brynberian -- rhyolitic tuffs (ashes) and lavas.  Rhyolite fragments are littered about everywhere, and there is one large slab projecting though the turf which I think is a bedrock outcrop: 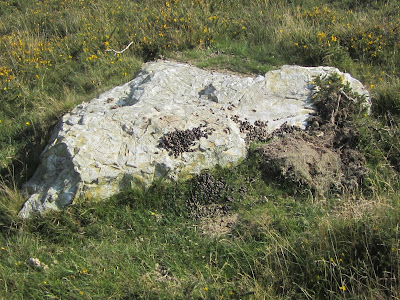 I was able to look at the stones that make up the remains of the gallery grave.  They are quite small, with none of them projecting more than 1m above the ground surface, and they are of all shapes and sizes.  Clearly there was no careful selection -- they were all picked up locally and used more or less where found.  Of the 42 or so stones still visible,  33 are made of dolerite, one seems to be of spotted dolerite, one is gabbro, and seven are rhyolite.  Many of the stones are smaller than skull size, and were probably used as packing or filling stones between the larger boulders used for the main structure of the monument.
These are two of the rhyolite stones in the setting: 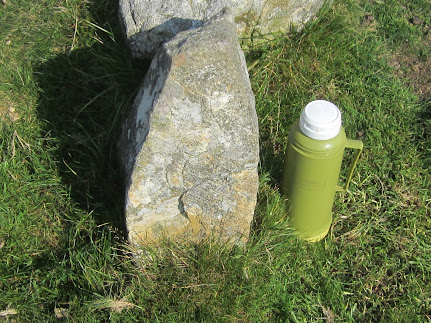 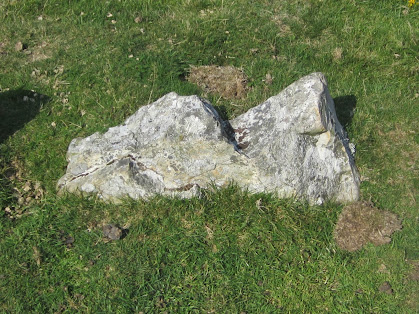 A jagged (broken?) stone  -- rhyolite without obvious foliations.
Out on the moor, the steep slope facing south at SN113344 seems to me made of rhyolite, which then extends out onto the moor for at least another 500m, as far south as SN114341.  It is variable in texture, but the light blue colour is consistent, as is the whitish weathering crust on fragments exposed in the track leading to Hafod Tydfil. Around the northern tip of the enclosed land of Hafod Tydfil, dark mudstones of the Abermawr shales appear in abundance on the track, indicating a change in bedrock type.  I think that the boundary between the Fishguard Volcanics rhyolitic tuffs and lavas is about 500m away from where it is shown on the map.
I wonder if the Brynberian Moor foliated rhyolites have been sampled by the geologists?  If not, they need to get looking, since we might have in this vicinity a source for at least some of the foliated rhyolite debitage at Stonehenge.
Finally, one very important point.  This gallery grave is a small and very crude structure, which may mean that it is older than many of the more spectacular Neolithic burial sites in Pembrokeshire.  The stones have NOT been chosen because they were pillars or slabs -- they were used because they were handy, in the immediate vicinity.  The rhyolites and dolerites are used randomly in the structure, and it is obvious that the stones have not been arranged purposefully with either texture, colour or origin in mind.  If either the dolerites or rhyolites had been "venerated" in some way they would surely have been arranged preferentially with one rock type in the passage or gallery, and another at the portal, for example.  My conclusion, from examining this and many other Pembrokeshire tombs, is that neither rhyolite nor spotted dolerite was revered or "selected" by the builders. They could not have cared less where their stones came from -- and this is a very different narrative to that of MPP, who seems to suggest in his articles that every stone used by the tomb and circle builders had ritual meaning.......

Nothing about the geology but did you know anything about this second passage tomb. I only came across this post recently and haven't been to find this yet.

We should probably call them gallery graves -- use the search facility on this blog. There seem to be at least three of them, and I reckon there may be more waiting to be discovered......

From looking at the other prehistoric stone settings on Waun Mawn (not the putative giant circle -- the other stuff) and on Banc Llwydlos etc, you will see a really mottley collection of stones, all picked up locally, with little or no regard for size, shape, rock type or anything else. The impression is of a busy late Neolithic and Bronze Age community with some shared communal characteristics (such as a liking for gallery graves!) but not much in the way of technical competence or sophistication......and perhaps not much manpower either.......