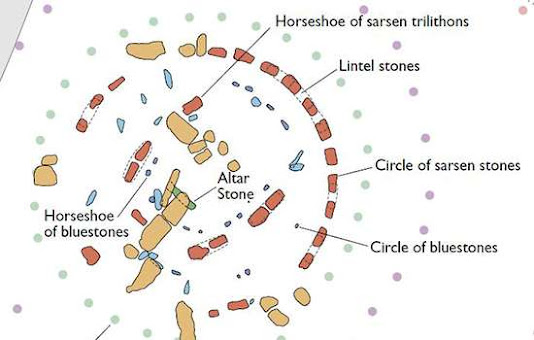 The one original point in the latest book chapter by MPP et al (2019) is a table of bluestone rock types contributed by Rob Ixer and Richard Bevins.  We reproduce it below, with acknowledgement of the source. 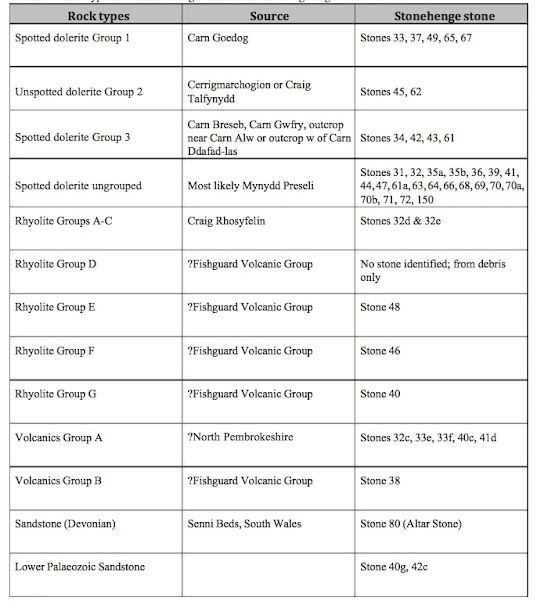 From:
Mike Parker Pearson ey al, 2019.  Long-distance landscapes: from quarries to monument at Stonehenge MEGALITHS AND GEOLOGY. Boaventura, Mataloto & Pereira, eds. (2019). pp. 183-200
https://www.academia.edu/44065619/Long_distance_landscapes_from_quarries_to_monument_at_Stonehenge?
The table lists 13 different bluestone "rock types" found at Stonehenge, and it is very interesting because it effectively blows the quarrying hypothesis out of the water.
There are actually far more than 13 rock types represented here -- for there is considerable variation in geochemistry and petrology within some of these groups.  The linking of rock types with specific stones is for the most part not at all sound,  since most of the Stonehenge bluestones have not been directly sampled, and the geologists have had to analyse debitage or fragments assumed to have come from particular stones.  For example, we do NOT know that the "Rhyolite Groups A-C" fragments have come from Stones 32d and 32e.  We do not even know that foliated rhyolite fragments at Stonehenge have really come from Rhosyfelin, in spite of what Ixer and Bevins may say.  The "spotted dolerite ungrouped" category  (assigned to 21 different numbered bluestones) contains considerable variation, and many different provenances are probably represented.  No stones have been shown in the scientific literature to have come from Cerrig Marchogion or Talfynydd.  The Altar Stone (80) has never been sampled, and we do not know that it comes from the Senni Beds.  The "Lower Palaeozoic sandstone" should be plural, not singular, and the assignments of studied sandstone fragments to stones 40g and 42c are acts of faith, not statements of fact.  The authors themselves admit that their samples point to two different sources.  We can go on -- but let's just point out that the table is useful as a guide, but that the assignment of particular stones to particular rock types is in many cases NOT solidly evidence-based.  As I have said many times before, there may be as many as  30 different provenances represented in the full assemblage of bluestone monoliths and debris at Stonehenge.
In that context, the very idea of Neolithic quarries having some importance becomes somewhat ridiculous.  Are the authors of this new book chapter suggesting that there were up to 30 quarries?  If not, what are they suggesting?  That they quarried monoliths from Rhosyfelin and Carn Goedog (in very difficult locations) just for fun, and just picked stones up from everywhere else?  Interestingly enough, this table of rock types is not discussed at all in the text.  I'm surprised that MPP allowed it to be published at all, since he must have realised how damaging it would be..........
The biggest bombshell here is the admission that most of the spotted dolerites at Stonehenge have NOT come from Carn Goedog, although this has been claimed over and again in the literature and in press releases.  When do we get to see the corrections and the apologies?
Only five stones are now assigned to Carn Goedog -- 33, 37, 49, 65, and 67.  I do not accept that this assignment is soundly based.
https://brian-mountainman.blogspot.com/2019/03/the-carn-goedog-bluestone-provenancing.html
Anyway, let's take a look at them, courtesy of  Simon Banton's excellent "Stones of Stonehenge" web site:
http://www.stonesofstonehenge.org.uk 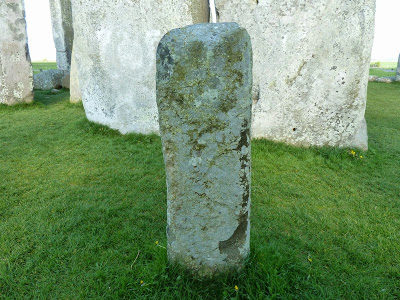 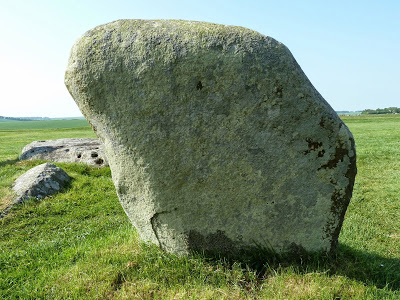 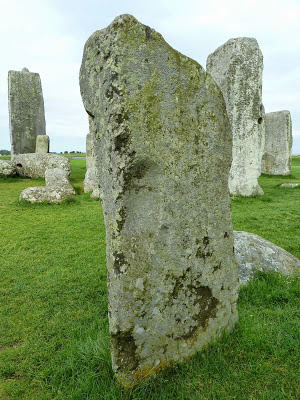 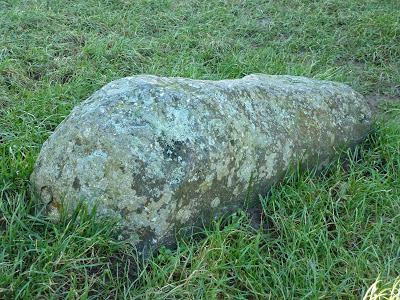 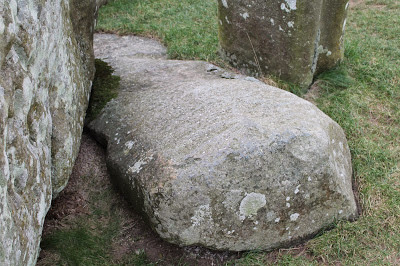 Are the authors of this new book chapter seriously suggesting that this little assemblage of spotted dolerite bluestones have been lovingly quarried and selected for use at Stonehenge (or even at some wonderful "proto-Stonehenge" at Waun Mawn) as first-class monoliths?  Stones 33 and 67 might loosely be called pillars, but stone 49 is an irregular battered slab, and stones 65 and 37 can only be realistically described as heavily weathered and abraded boulders.  MPP has argued over and again that Carn Goedog was quarried because that is where there was columnar jointing, and where the most perfect pillars could be found..........
These five stones are typical glacial erratics which have been faceted and abraded in glacial transport and subsequently weathered as a result of exposure to the atmosphere for maybe 20,000 years.
Oh dear, for how much longer do we have to put up with the fantasy world created by MPP and his fellow storytellers?
PS. 23 Sept.    I have now checked out the 2016 paper by Ixer and Bevins on the Fishguard Volcanics
Group A" debitage.  They say: "Volcanic Group A lithics are widely and randomly distributed throughout the Stonehenge Landscape; temporally, almost none of the debitage has a secure Neolithic context. The debitage cannot be matched to any above-ground Stonehenge orthostat but may be from one or more of five buried and, as yet, unsampled stumps."  And yet, in the table reproduced above, they quite blatantly assign 5 of the Stonehenge bluestones to this source.   Apparently, scientific caution is abandoned.  What on earth are these guys playing at?
Posted by BRIAN JOHN at 22:25

Earlier this morning, before I had even glanced at this earlier Post, I put a comment on your "second" Post, really in response to your photo taken yesterday of a glacially striated bluestone you came across on your 5 - mile walk.

I observed that we have some time ago discussed Isobel Geddes' opinion that some of the Stonehenge bluestones show signs of glacial striations. I think we need to contact Isobel (who is a leading light of the Wiltshire Geology Group*, and is still quite actively walking through landscapes).

Yes, I know of Isobel's work. I have quoted it at various times, and have been in touch with her on a number of issues.....

Striations are nice if one can find them -- but coarse-grained rocks tend not to display them very well. Much more important signs of glacial transport are faceted faces, rounded edges as a result of collisions and abrasion, and thick weathering crusts across much of the surface that shows that a boulder / slab / pillar was used "as found"......

Come down to Stonehenge with a microphone together with someone using a video camera, and go round most of the bluestones as displayed already on Simon Banton's own Blog, one by one, put it onto YouTube as well as your Blog and.....all things will thus be revealed and displayed.

... and EH would probably charge me a thousand quid for access........ and in such a way are secrets protected and myths perpetrated....

......AND, indeed, perpetuated. Ahh, well, one day perhaps. P'haps if one us wins The Lottery we would be able easily afford it. Or drop in by parachute? Remember the RAF in wartime France.....

High time for EH to espouse some proper science on the stones instead of allowing Rob Ixer and Richard Bevins to bump along, year after year, doing the same old studies on bits and pieces from the debitage. Cores (which can easily be disguised) are needed from all of the sarsens and all of the bluestones-- and the samples should be used for new Xray work on the petrology and for cosmogenic nuclide dating. Then we would be getting somewhere........

Doesn't cost the Earth to obtain an 'Inside The Stones Pass' from EH. The bluestones, stumps, mis - shapes and all, could then simply be filmed with commentary using a smartphone. The ecological approach! Someone could do this, you could add your observations on such things as thick weathering crusts, likelihood of glacial damage, etc. This would be taken seriously by many of your Blog readers here, there, and everywhere. The percentage of folk now tending towards favouring glaciation would rise.....