Dylan Thomas and the Altar Stone

I followed up the grid reference and the text of the BGS Research report RR/14/02:

One of the reference sections of the Senni Formation is at Llansteffan:
Cliffs at Craig Ddu on the western side of the Llansteffan peninsula, Carmarthenshire [SN 32441015](Owen, 1995). These reach a height of 20 m and have continuous exposure for 400 m of beds near the top of the formation.
Lithology:  Mainly of green and green-grey (locally red-brown and purplish green), very fine to medium- grained, micaceous sandstones, mainly channelised, cross-bedded and parallel-laminated, with green and red-brown siltstone and mudstone interbeds, some calcretes and intraformational conglomerates; the formation is characterised by the presence of vascular fossil plant remains and some soft sediment deformation is also present.
Lithostratigraphy of the Old Red Sandstone successions of the Anglo-Welsh Basin
BGS Research Report RR/14/02

I suggested in the previous post that a  prominent ridge such as that surmounted by the castle would be well suited for thrusting in the basal layers of glacier ice, and hence for the entrainment of erratics from outcropping beds of sandstone.  But now that I have checked out the location of Craig Ddu, this is the way it looks, thanks to "Where's the Path3": 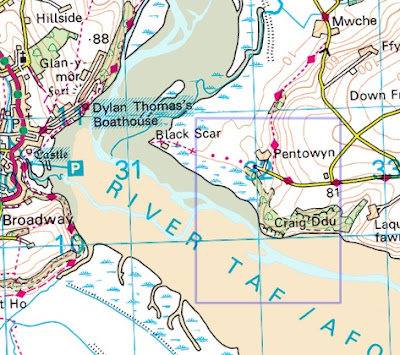 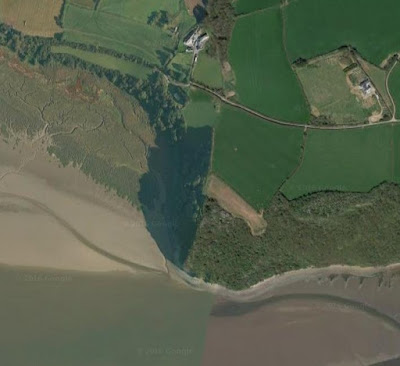 Bingo!  Craig Ddu is about as perfect as it gets, as a glacial entrainment site.  It's a prominent spur,  50-60m high, with a steep scarp face on its western side.  Climbers refer to it as an excellent "bouldering spot" -- meaning there are big slabs that can be scrambled over.  Its in heavy shadow on the satellite image, and is currently thickly wooded.  But the Senni Beds outcrop along the shoreline for 400m. In fact, an enlarged image shows that the whole of the wooded slope is littered with grey boulders.  Glacier ice coming in from the WNW would have hit this scarp and would have done its best to get rid of it. 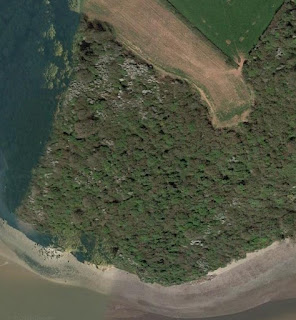 In this enlarged image, we can see that the scrubby woodland on the slope partly masks a great litter of grey-coloured boulders -- presumably all derived from the Senni Beds.


For an extra touch of romance, the Dylan Thomas Boathouse is just across the estuary, about a kilometre away.  The beloved fellow, as he sat there seeking inspiration, would have had the Craig Ddu scarp in his line of sight.......... 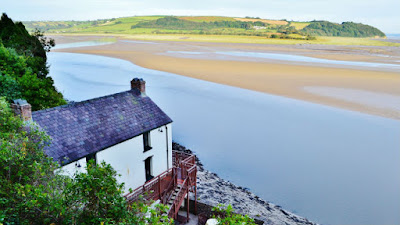 In the lower image, we see the Boathouse and the wooded scarp of Craig Ddu across
the estuary, top right.


So here is a message for all  geologists.  Ixer and Turner have examined thin sections for Craig Ddu and presumably from the Kidwelly area as well, although their paper does not list the samples used for comparisons with the material from Stonehenge  (apart from sample 86.31).  It looks as if at least four different lithologies from the site have been examined.  Please give us some more info from the Senni Beds and especially from Craig Ddu -- it would be interesting to see how much variation there is through the Senni Beds sequence, and how much change there is across country as one follows the outcrop northwards and eastwards.

The Ixer and Turner description:

A detailed re-examination of the petrography of the Altar Stone and other non-sarsen sandstones from Stonehenge as a guide to their provenance.
by R.A.Ixer and P.Turner


Thin sections of typical sandstone, siltstone and cornstone lithologies present within outcrops of the Senni Beds from a coastal exposure on the estuary of the River Taf at Craig Ddu were investigated in order to compare them with the Stonehenge samples. The outcrops are at the western end of the Senni Beds outcrop, closest to Milford Haven. The lithologies range from micritic limestones with minor amounts of muscovite and quartz (cornstones) to carbonate-poor, matrix-supported siltstones and carbonate-poor, clast- supported, very fine-grained sandstones and to fine- to medium-grained carbonate- cemented sandstones. Characteristically, all of the lithologies lack any significant signs of a tectonic fabric.

Although the overall mineralogy including the heavy minerals suite is similar, there are significant differences between the petrography of the siltstones and sandstones from Craig Ddu. Only the coarser grained sandstones have significant carbonate (>10% by volume) and long muscovite laths lying along bedding planes, whereas only the fine- grained lithologies carry significant interlayered chlorite-muscovite grains.

Microscopically the rock is a fine-grained, well-sorted sandstone with a mean grain size of 0.15mm and a maximum grain size of approximately 0.30mm. The clastic grains are angular to subrounded and the modal group is subangular. The grains are predominantly equant in shape, but a number of prolate grains are also present.

The rock has a homogeneous fabric but thin, planar bedding is observed by less than 0.5mm wide, phyllosilicate-rich laminae that are muscovite- and green and brown chlorite-rich. There is very little detrital, fine-grained, interstitial material/clay and the main matrix is a carbonate cement. Quartz and feldspar grains float in this cement and show both pristine and corroded grain boundaries.
Mineralogically, visual inspection shows quartz to be the most abundant detrital mineral accompanied by lesser amounts (in order of decreasing abundance) of fine-grained rock clasts, alkali and plagioclase feldspars and phyllosilicates including white mica and a number of optically different chlorites. Accessory minerals are dominated by equant, opaque mineral grains accompanied by zircon, tourmaline and rutile plus very rare amounts of garnet, sphene and anatase.

Angular to subangular, single quartz grains showing uniform extinction and no authigenic overgrowths are present within the carbonate matrix. Polycrystalline quartz clasts include quartzite and stretched quartz suggesting a metamorphic origin for them. Untwinned or simply twinned, tabular, alkali feldspar, including some perthite, shows slight alteration; this is seen as pale brown/orange, turbid cores. Microcline, if present, is rare. Lath-shaped, multiple twinned, sodic plagioclase is predominately fresh and shows very rare, thin, authigenic overgrowths.
Long muscovite laths lie parallel to the bedding and many show fine-scale kinking about quartz or feldspar grains. Pale to dark green or brown-green chlorite laths show a range of interference colours and are widespread. They too lie parallel to bedding and show fine-scale kinking. Biotite, if present, is very rare. A single interlayered muscovite- chlorite intergrowth was identified.

Rock clasts are the same size as the mineral clasts.  Many are fine-grained siliceous "cherts" that include acid volcanic lavas but minor amounts of quartz-white mica phyllite, graphic granite and foliated feldspathic lava (trachyte) are also present.  The matrix/cement is untwinned carbonate, probably calcite.

The sandstone is unmetamorphosed and lacks any tectonic fabric. It lacks significant, authigenic overgrowths on its detrital quartz and feldspar clasts or any interlayered chlorite-muscovite grains. Its rock fragments and heavy mineral suite suggest that its source area comprised eroding acid igneous rocks rather than high-grade metamorphics. Lithologically, it is clear that this rock shares many characteristics with the Altar Stone and since carbonate-cemented sandstones are common in the Senni Beds, one of them may well be the source of the Altar Stone.

Comment:  I take this to mean that the match is pretty close, and that the Altar Stone could well have come from part of the Craig Ddu outcrop.