Could the Altar Stone have come from Ferryside or Llansteffan? 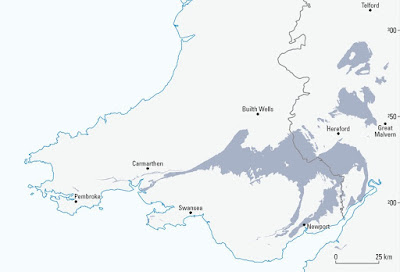 The lower Old Red Sandstone outcrops of South Wales.  Note that this map shows ALL of the lower or older ORS beds exposed -- the Senni Beds (now called the Senni Formation) are widely exposed in the Brecon Beacons, on the base of the north scarp of the mountains, around Crickhowell, in the Black Mountains, around Ross on Wye, on the flanks of the Wye Valley, and in narrow strips near Newport and Cardiff, and on the eastern edge of the South Wales Coalfield. 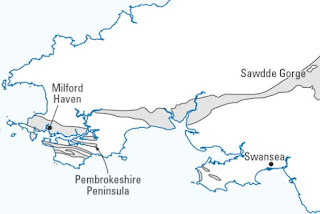 This map shows ALL of the ORS outcrops in SW Wales.  The "triple estuary" of the Taf, Tywi and Gwendraeth is in the centre of the map.  The Llansteffan Peninsula is between the rivers Taf and Tywi.

I have been looking again at the admirable paper by Rob Ixer and Peter Turner on the provenancing of the Altar Stone (or rather, a sample of rock purported to have come from the Altar Stone).  They present convincing evidence against the old theory that the stone came from the Cosheston Beds of South Pembrokeshire -- and their preferred designation is to the Senni Beds (Lower Old Red Sandstone / Devonian) which outcrop across a large area of South Wales.  The Senni Beds strata comprise fluvially deposited fine- to coarse-grained sandstones with associated calcrete deposits.   The rocks are grey of greenish-grey in colour.

We have speculated on this blog before  about where, precisely, along the Senni Beds outcrop the Altar Stone might have originated.  It's clear from the above map that there are multiple possible locations, and Ixer and Turner are circumspect about suggesting what their preferences might be.  But on the assumption that the most likely locations are withing the Brecon Beacons National Park, Prof MPP and others have suggested that "the A40 land route" was the most likely land route for any Neolithic tribesmen who were in stone-gathering mode.  We have discussed this before, without much sympathy! 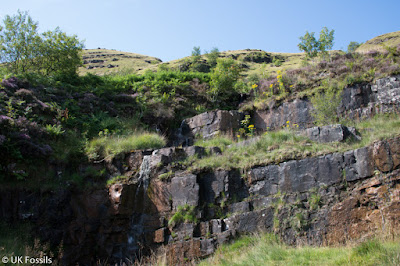 In our previous discussions of glacial transport routes for the erratics that have ended up at Stonehenge, we have suggested that glaciers carrying erratics from the uplands of Mid and South Wales did indeed flow southwards towards the Bristol Channel coast, and could well have carried Senni Beds erratics southwards into the path of the Irish Sea ice stream that flowed (probably on more than one occasion) towards the coasts of Devon and Somerset.  We now know, from studies in Tremadoc Bay and in North Wales, that the advances and retreats of Welsh Ice and Irish Sea ice were not synchronous, and indeed it is safe to assume that in South Wales (and maybe in Pembrokeshire as well) glaciers flowing from the Welsh ice cap reached their maximum positions prior to the arrival of Irish Sea ice and were then overwhelmed or displaced by its superior power.  I will provide more evidence on that matter in another post.

So erratics carried in the glaciers decanting southwards from the Brecon Beacons and the South Wales Coalfield could well have been turned through 90 degrees and later carried broadly eastwards by the Irish Sea Glacier in the same glacial episode.

Another possibility is that there was no need for a 90 degree turn at all in the course of erratics such as the Altar Stone.  Perusal of the British Regional Geology for South Wales shows that there are narrow outcrops of Senni Beds sandstone on the Carmarthen Bay coast between Ferryside and Kidwelly and in the area to the west of Cardiff, in the Vale of Glamorgan.  Without any need for a "two-phase" transport route, erratics from these outcrops could well have been picked up by the Irish Sea Glacier during the Anglian Glaciation.  The BGS volume refers to Senni Beds at Pengau (Pen-y-gau) Farm near Ferryside, and Ixer and Turner refer to "representative samples of Old Red Sandstone siliciclastics from the Senni Beds near Kidwelly loaned by Dr G. Owen."  Erratics from both of these sites could well have been picked up by overriding Irish Sea Glacier ice:

Text added:  Llansteffan now also comes into the frame.  On looking at the Carmarthem Memoir (1909) by Strahan et al (including HH Thomas!) it's clear that there are a number of outcrops of the Senni Beds on the coast at Llansteffan, in the vicinity of the Llandyfaelog Fault.  These exposures are also described by Cope (1982) in the volume edited by MG Bassett called "Geological Excursions in Dyfed, SW Wales" (Ch 14, p 268).  No doubt there are many mentions in the specialist literature as well. One of the reference sections of the Senni Formation is at Llansteffan:
Cliffs at Craig Ddu on the western side of the Llansteffan peninsula, Carmarthenshire [SN 32441015](Owen, 1995). These reach a height of 20 m and have continuous exposure for 400 m of beds near the top of the formation.
Lithology:  Mainly of green and green-grey (locally red-brown and purplish green), very fine to medium- grained, micaceous sandstones, mainly channelised, cross-bedded and parallel-laminated, with green and red-brown siltstone and mudstone interbeds, some calcretes and intraformational conglomerates; the formation is characterised by the presence of vascular fossil plant remains and some soft sediment deformation is also present.
Lithostratigraphy of the Old Red Sandstone successions of the Anglo-Welsh Basin
BGS Research Report RR/14/02

A prominent ridge such as that surmounted by the castle would be well suited for thrusting in the basal layers of glacier ice, and hence for the entrainment of erratics from outcropping beds of sandstone.

So the premise is this:  if you know that the Altar Stone came from the Senni Beds of the ORS series, and you want to know where the precise provenance might be, you might as well start by looking at the outcrops that are located on the known route of the Irish Sea Glacier.

There is one further question, for which I would appreciate an answer.  How much variation is there within the Senni Beds sandstones between the western outcrops in the Tywi Estuary and the eastern outcrops in the Brecon Beacons and in Gwent?  If somebody can advise us on that matter, it may be possible to further narrow down this particular provenancing dilemma.  Myris, over to you.......

As an aside:  it would be great fun if the Altar Stone should ever be shown to have come from the Llansteffan - Ferryside - Kidwelly area, since that's where some of my roots are. My parents lived for a while in Ferryside, and that's where my sister was born.  My grandparents lived in Ferryside and Pembrey, just along the coast.  I had relatives (a couple of ancient great aunts dressed in black and smelling of camphor balls) who lived in a grand house in Llansteffan -- we used to visit them occasionally.  And my mother's family farm was called Coedybrain, near Llandyfaelog, close to the famous fault of that name.  I spent many happy holidays there as a small boy.

There may be more recent papers.
I do believe the pet rock boys are abandoning the warm volcanics to look at the ssts of Stonehenge and would know more then.

Of course an obvious place to start looking is the narrow outcrop lying closest to any potential Severn River crossing.

I suspect that provenancing the Altar Stone will be the most difficult of all.

Thanks Myris -- yes this is intriguing. I have been in touch with Prof Brian Williams in the past. Agree it will be interesting to see what the eastern outcrops are like -- on the Severn estuary shore. Are they petrologically close to the samples you looked at?

While conidering this area, I'm reminded of something I came across a long time ago, but cannot find any evidence for. Perhaps all of you can assist?

The information was that the River Towy originally ran further to the west of Carmarthen in the broad valley towards St Clears, before entering the sea down the valley containing the present River Taf and Laugharne.

This suggested that the route of the Towy had been blocked by glacial debris, encouraging the Towy to cut south forming the more direct route from Carmarthen to Llansteffan. Every time I travel this way by train or car, it crosses my mind and I look for evidence.

Am I looking in vain?

You are quite right, Dave. There have been many glacial diversions of drainage all over South Wales -- I would hazard a guess that none of the rivers still flows in its pre-glacial course. There are blocking deposits of moraine and fluvioglacial sands and gravels all over the place -- some nice examples are the big mounds near Bancyfelin, west of Carmarthen.