Thanks to Phil Morgan for drawing this to my attention.  It's an article by Mike Pitts in the latest edition of "British Archaeology" (Sept-Oct 2013, p 6) in which he draws attention to the find by Tim Daw that during the UK summer drought there were dried-out patches showing up in the Stonehenge turf.  There were lots of them, of all shapes and sizes -- some revealing the locations of old excavation pits, trenches, and paths.  But some of them seemed to coincide with the places where sarsens 17-20 might -- or might not -- have been located.  The illustrations below show the locations of these 'burnt opatches' on the Stonehenge map, and on the ground during July 2013. 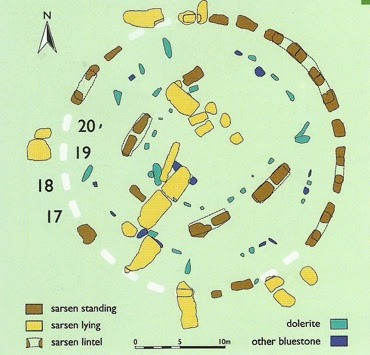 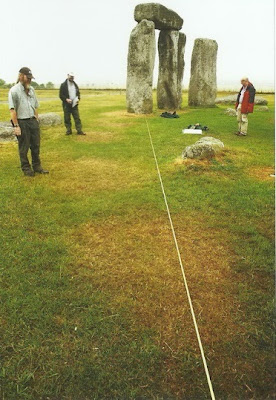 Photos:  acknowledgement to British Archaeology.  Please go to the magazine for the full article. In the photo, the patch in the foreground coincides with the supposed location of sarsen 17.

This of course brings up the great debate about the completion (or otherwise) of the stone monument -- a matter argued about since Inigo Jones in 1655 assumed it WAS complete, and Wood in 1747 argued that it wasn't.  I have personally argued that the monument was never completed, since I could not see any sound evidence that it was -- and many others have agreed with me on that, including a number of current archaeologists.  Well, in the light of this latest evidence I don't think I would go so far as Mike Pitts does, with the headline "STONEHENGE DISPUTE SOLVED AFTER 260 YEARS."    But the evidence IS quite persuasive.   So one must keep an open mind.

However........  There are still a number of issues to be sorted before this matter really is resolved.  The "burnt patches" are quite large -- much larger than the "footprints" of the assumed sarsens.  They are also rather irregular, not being in PRECISELY the right places.  Rather large pits might have been dug by the Stonehenge builders in preparation for some big sarsens -- but that does not mean that the sarsens ever were found and installed.  Also, we have the widely-cited evidence from geophysical surveys that shows no pits or sockets here -- how does that evidence square with what has shown up during the 2013 summer drought? (See the chapter by David and Payne in "Science and Stonehenge.")  Again, the marks shown on the photo may simply show where past excavations have taken place, conducted by people who were looking for fallen and buried stones, or simply for the sockets -- and naturally they would have dug and searched in the places where the sockets were assumed to have been located.

Interesting debate coming up, I suspect....

If these patches identify sarsen pits shouldn't they be greener than the surrounding area? Since the deeper soil cover of a pit would surely retain more moisture than the less deep surrounding areas. Something else may be going on here.

Yes, some very interesting debate to come.
I put some other photos of the marks up on my blog at http://www.sarsen.org/2013/07/partch-marks-at-stonehenge.html - since then the debate has moved away from blogs to more traditional places so I haven't added more.
Having discovered, measured and plotted them I can say they are in hte exact arc and spacing where the stoneholes are expected and they are the right size and shaping. I think there is little doubt they were holes suitable for the missing sarsens. (Other known holes showed up in exactly the same manner.) That, of course doesn't prove they ever actually held stones though, or when they were dug.

One of the very first things you do, especially if you wish to construct a structure made of fixed length components, is to investigate the sub-soil in any locations you might wish to put foundations. You do this before you finalise the design. If the stones were installed, there is a simple method to determine one way or the other.

Kostas has a valid point regarding the moisture retention of a pit. But there's a 'but' coming.

If there was a sarsen in the hole, and if it had been removed, then the hole would either have been filled by nature, or by human hand.
A natural fill would tend to be chalk based, resulting in a greener patch of grass as Kostas suggests.

However, if the hole was back-filled by human hand, using a more impermeable material such as clay perhaps, then the moisture retention would be less than the surrounding chalk, and a parch-mark would result.
The nearest clay deposits would be at West Amesbury and Berwick St. James, but I have no idea why the fill material would be imported.

Loose chalk drains better than the solid chalk surrounds - as I say known holes such as where Gowland put his props were exactly the same. Negative crop marks to use a googlable phrase are well known and understood.

Welcome back! After some ten days of blocked-blog absence! In the meantime, you missed two of my posts regarding the 'negative cropmarks' reasoning of Tim Daw. I was responding to his last-post-standing in that thread. Here is a quote from the Cambridge Archaeology Field Group relevant to this interrupted discussion.

”In principle, positive cropmarks form where a feature is dug into the original land surface and subsequently re-filled over time – for example: ditches, beam slot house foundations, post holes and pits – that hold water and nutrients. Negative cropmarks form where solid features were constructed – for example: brick and stone masonry, cobbled floors and roads – that shed water and hold few nutrients.” http://www.cafg.net/docs/articles/What_is_aerial_survey.pdf

Sorry if I missed anything, guys. I thought I had captured / published everything sent in. But things were a bit chaotic at times over the last couple of months...... back to normal now, I hope.

Your blog lacks animated discussion and debate of old! Maybe you can get the ball-pen rolling and list the evidence for an incomplete Stonehenge!

A couple of us were getting a bit concerned...
Glad you're OK, Brian. Good to see you're back.

I posted a rather lengthy note myself, probably on the 10th or 11th - and don't see it.
Best
Neil

Thanks for the comments, folks. I'm wondering whether Blogger has some sort of rule that only allows me to moderate and paste comments from my home computer, and not from my laptop when I'm abroad. But it all looked as if I was publishing things as normal..... Strange.

Neil, if you have any comments that have gone astray, send them in again and I'll try publishing from this end!

That's very gracious Brian.
Unfortunately I was winging it (as usual) and didn't save the message. Pity, as it was pretty good.(long too, also as usual!)
Best,
Neil

I was winging it too: Didn't save the message. Nevertheless, if Tim's still reading here: Do you know what type of GPR was used to get to the previous inconclusive result?

If posts go against Brian's theories, then perhaps they get mislaid.

Snide comment, Anon. But those who do not give their names can be as snide as they like. No respect due to you, I'm afraid.

As it happens, I quite like posts that question my theories, as any serious reader of this blog will know. That's how we get progress.

Concerning the question “complete/incomplete”. From our previous discussions on this, the SW quarter of Stonehenge is said to be “incomplete”. Are all of the various features of Stonehenge (sarsen circle, outside ditch, Aubrey holes, etc.) “incomplete” at this SW quarter? And if so, wont that raise serious questions why all and why at this section?

Can you post if you can any GPR images and the recent aerial “dry patches” photos of the entire Stonehenge proper area for comparison? That would lead to some useful discussions, I think.