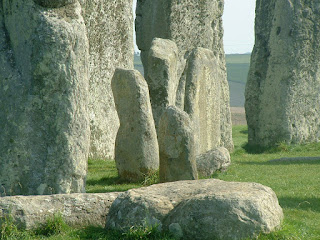 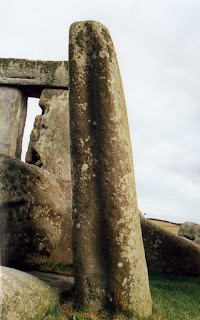 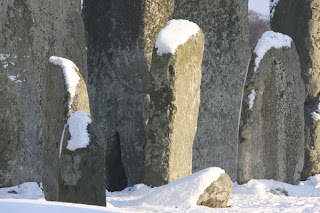 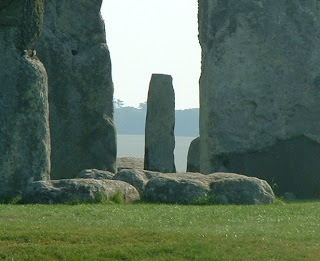 We are often told (for example by MPP when all that stuff about Bluestonehenge was published) that the sockets that held bluestones were of a certain size, and that indeed the bluestones "quarried and carried from Pembs to Stonehenge" had certain ideal dimensions.  The figure of 4 tonnes per stone keeps on recurring, and over and again people refer to the bluestones as being about 2m tall above ground and maybe 1m buried, in a socket.  So the "ideal" size for a bluestone seems to be about 3m long, up to 80 cm wide, and about 80cm thick.  But hang on -- what is the variation about this mean, and how many of the bluestones known at Stonehenge get anywhere near the ideal?

Somebody will probably correct me if I am wrong here, but my impression is that there is incredible variety in both the dimensions of the bluestones and their geological characteristics.  We know about 43 bluestones -- six standing in the bluestone circle, thirteen leaning or fallen over, and ten stumps -- making 29 in the circle, which was probably never completed.  They are assumed to vary between 2 tonnes and 4 tonnes in weight.  Two may have been trimmed and used as lintels.  Then we have the 13 stones of the Bluestone Horseshoe -- six in position, five fallen, and two stumps.  Then there is the Altar Stone, quite different from all the others in weight and dimensions,  over 5m long and maybe weighing 9 tonnes.

So the 43 stones make up an extraordinarily mottley collection.  Some are elongated, some are stumpy and slab-shaped, some have an almost square cross profile, some are tapered, some are shaped, and some are rough.  Some are hard and some are flaky.  Many appear to have been so poor in quality that there is nothing left of them but a pile of flakes -- referred to as the "debitage".  Atkinson said of the bluestones in the circle that all of them (apart from two used as lintels) were in their natural state,  free of all signs of tooling or dressing.  Anthony Johnson says that the circle bluestones are of all shapes and sizes "used in a seemingly random way -- almost a garden ornament phase."

Does anybody have a complete list of all 43 bluestones, and their dimensions?    That would be very interesting -- and I suspect it will confirm that the bluestone assemblage is pretty shambolic, with a few very nice pillars but many "rubbish stones" that were not particularly useful for setting in the ground, not easy to shape, and not capable of resisting the handling of the builders.  Ashes and flaky rhyolites were particularly vulnerable.   All we have left of some of them are those stumps....... and a great deal of debris.

As far as I am concerned, this is a classic collection of glacial erratics, some of which were quite handy for the building plans of the Stonehenge people, but others of which were really more trouble than they were worth.  And as I have said many times before, there never were enough of them anyway for the building of a decent megalithic monument.
Posted by BRIAN JOHN at 21:38

"Does anybody have a complete list of all 43 bluestones, and their dimensions? That would be very interesting".

Well, I, for one, hope the Security Men who guard Stonehenge on behalf of English heritage do. They really ought to have a full inventory, in case any go missing.

There is an appendix in the Ros Cleal et al book with heights of the stones that were standing in 1919.

Given the suggested average volume of the bluestones,
(1.92 m3), and the average specific gravity of the rock types of 26-30 (quoted in the literature).
Then by my calcualtions, the average weight of the Bluestones, should be between 4.9-5.75 metric tons.

Thanks Alex. That's useful. I have seen very variable estimates of the weight of the Altar Stone -- anything between 6 tonnes and 9 tonnes. What do think is a reasonable estimate for that one?

If you know the dimensions of a given stone, and know the specific gravity of the rock type, then it's a very simple calculation.
Obviously the volume of the given rock, is established from the dimensions e.g. 100cmx100cmx100cm= 1000,000cm3 or 1m3

This is only based on a cursory examination of figures for specific gravity quoted in my geological textbooks.

The principles however are sound.