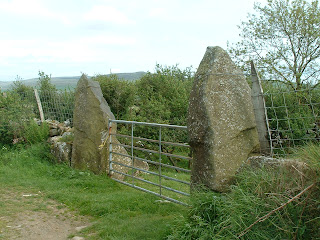 Two of the Russia Stones near Pontfaen, Pembrokeshire.  Now used as gateposts, but supposed by Robin Heath to be part of a prehistoric alignment.  The stone farthest from the camera looks as if it is freshly broken, which is not surprising, since the stones have only been there for about 30 years, having been put in place by a JCB....

Now here's a funny thing for you.  Last night, before I nodded off in bed, I was reading the latest exciting episode in Robin's book called "Bluestone Magic" -- and was intrigued by his references to an alignment of very large stones which he called "The Russia Stones."  They are not far from the Parc y Meirw alignment, which is well known and which has been discussed for many years by antiquarians.  It even has a ghostly tale attached to it.  But I have never before seen any reference to The Russia Stones (so named because there was a cottage called "Russia"nearby) -- and Robin seems to be the first person to have described them......  so I was intrigued.

Robin says there are three spectacular standing stones, and one recumbent stone in a hedge, aligned precisely on the east-west line, and used by the Neolithic or Bronze Age builders to predict precisely the sunrise at the equinox.  All three of the stones are currently used as gateposts.   He also says the stones are aligned precisely with the St Davids alignment, and by reference to the three standing stones he analyses in depth assorted sights, azimuths and sighting positions for sunsets and sunrises.  All very mathematical and impressive.....

Anyway, I thought I should amble over and have a look at them again, although I have walked past them many times before.  As I approached the biggest of the three stones after crossing a field full of sheep, I encountered two local farmers, leaning on a hedge and putting the world to rights.  We got to chatting, as one does, and we got to talking about the standing stones.

"I suppose so," said Farmer Number One.

"Very ancient, they are," said I.  "They are supposed to date from prehistoric times, are they not?"

They left me in no doubt that the other two stones in the "alignment" had also been dragged out of the fields and put up as gateposts in recent times, since stone gateposts were much better than wooden ones.

So there we are then.  Now we know why there are no old records of The Russia Stones.  When the old records were written, they weren't there.  They were lying in the ground somewhere else, until farmer Number One and his brother decided to drag them away and use them as gateposts.

Bang goes another of Robin's theories, and the Bluestone Magic appears a bit less magical than it did yesterday.

Lesson for tonight:  things are not always what they seem, although if things look like gateposts they probably are gateposts.  Here endeth the lesson.  Amen and goodnight.
Posted by BRIAN JOHN at 23:39

Reminds me considerably, Brian, of the tale I recently recounted, comparing the Robin Heath/ Michell "Prehistoric" version of events with the Anglo Saxon Charter/ W.G.Hoskins account of the Sarsen Stone at Alton Priors, in the Vale of Pewsey. According to Robin Heath and Michell, this sarcen stone with its hole bored into it, has ALWAYS been located UNDER the nave of the Church, "and is surely the original mark-stone, a surveyor's point on the Stonehenge - Avebury axis".

The renowned Local History Professor, W.G. Hoskins, by contrast, informs us that a similar stone with a hole in the middle is mentioned in King Edgar's Charter and could UNTIL RECENTLY still be seen in the specified location at Winding Combe. Hoskins makes no mention of any similar stone underneath the Church.

I know which version of events I am inclined to believe. Heath, as I understand it, is by training an Engineer. By contrast, Hoskins was a deeply knowledgeable Local History academic. He wrote "The Making Of The English Landscape", which thousands of undergraduates of Geography and related subjects will be familiar with over the last 40-50 years. Engineers tend to work in straight lines and angles; local historians look for landscape features wherever they may be found and relate them to other landscape features, natural or man-made.

I suppose we have all made mistakes -- I have sometimes had to stop and think after finding some spectacular erratic on a beach in Pembrokeshire, and have had to conclude (reluctantly!) that certain stones may well have come in as ballast in the holds of the little trading ships in the good old days........

But I hope I have never made a mistake quite as spectacular as this!

Ah yes -- Hoskins's book was one my bibles in the old days. Do I see the influence of my old friend Brian Roberts in the things you say?!!

You do indeed, Brian, you do indeed! And I have in recent times been in contact with another Durham Graduate, Dr Simon Draper, who also studied with Brian Roberts, albeit at least 20 years after me. W.G.Hoskins was also a great influence, not least because I utilised his Devonshire studies whilst preparing my Undergraduate Dissertation. And I had only arrived in Devonshire at the same time as starting at Durham, so W.G. assisted me greatly as I began to explore my new County.Not quite Antarctica, but an exploration nonetheless!