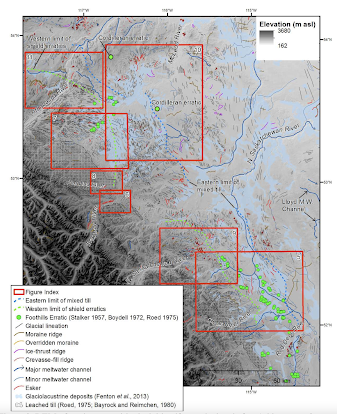 Above is the key map from the article by Utting et al which deals with the sedimentological and morphological features along the contact zone of the two big North American ice sheets during the Last (Wisconsin) Glaciation.  The map is a treasure trove of information, as you will see if you click to enlarge it.

https://doi.org/10.1002/jqs.2903
https://eprints.whiterose.ac.uk/105138/1/Utting%20et%20al%20Laurentide%20and%20Cordilleran%20confluence%20zone_pre-proof.pdf
The main points:
1. The ice contact zone between the two ice masses ran approx from top left to bottom right of the image.   The "belt" of associated features runs for over 350 km, and is about 30 km wide.
2. Within this belt we can see the Foothills Erratic Train, the western limit of shield erratics, the eastern limit of mixed till, meltwater channels and a host of relatively minor features including overridden moraines, ice-thrust ridges, crevasse fill ridges, eskers etc.
3. Possibly the most interesting features are the "glacial lineations" picked up on satellite imagery.  These show the two ice streams converging and flowing more or less parallel, NW towards SE. We can also see the streamlines of the major glacier inputs into the Cordilleran ice front on the mountain fringe; in places these show southwards diversions of the ice from the mountains (as in the case of the Athabasca Glacier and the N Saskatchewan Glacier).  In other cases we can see crossing lineations, caused when the early piedmont glaciers were dominated and then diverted southwards as the more powerful Laurentide Ice Sheet began to dominate.
4.  The pattern of glacial lakes is difficult to relate to the contact zone between the "competing" ice masses,   and the most obvious feature of the map is the impounding of meltwater as the Laurentide Ice Sheet edge retreated north-eastwards -- ie downslope.
Lessons for the western flank of the Welsh Ice Cap?  Well, the contact zone between the two ice masses may well have oscillated laterally over tens of kilometres.  Within that zone, we would expect a mixing of erratics, tills, surface lineations, and maybe morainic features.
What we now need to do is to tie in the evidence on the ground with the modelling work already done, and see where this takes us...........
For example, at New Quay there is a lower Welsh till and an upper Irish Sea till.  Two glacial episodes, or just one, with the Welsh ice dominant at first (and reaching the position of the present coast) and then Irish Sea ice pushing in and dominating from the west.
And on the Llyn Peninsula things are very complicated, with Welsh ice dominant in some locations and Irish Sea ice dominant elsewhere.  There seem to have been several short-lived glacial readvances during overall ice retreat.  There are a number of sites where two different tills are represented in the same coastal exposures......  at Glanllynau there is a "multiple till sequence" in which all the deposits are assumed to be of Late Devensian age.  At Lleiniog on Anglesey, fluvioglacial gravels are overlain by Irish Sea till, but it contains Snowdonia erratics, suggesting oscillations and a mixing of two different ice masses.
Posted by BRIAN JOHN at 15:43