Why was prehistoric Wales singularly disinterested in stone circles?

Gors Fawr stone circle -- interesting, understated and rather unique......
The archaeologists all say the same thing -- that Neolithic Wales was singularly disinterested in stone circles -- in striking contrast to the Lake District, the Southwest Peninsula and Scotland.  Cromlechs (dolmens), standing stones and other stone settings are easy to find in Wales, but decent stone circles (as distinct from ring cairns and small settings of upright stones around burial sites) can be counted on the fingers of one hand.  Darvill and Wainwright, in Pembs County History Vol 1, claim that there were about 80 stone circles in Wales, accounting for six per cent of the British total, but I am not sure where they get that figure from -- I guess it is based on lots of assumptions about stone circles that are no longer present, or where somebody or other back in the good old days has speculated in the literature.......

In Pembrokeshire, although Darvill and Wainwright map six stone circles, there is only one that deserves recognition, and that is Gors Fawr near Mynachlogddu.  As everybody says, it's rather charming but not particularly impressive; and no attempt was made by the builders to use pillar-shaped stones.  Bedd Arthur, up on the Preseli ridge, is a strange stone setting, oval shaped and with a cluster of small stones leaning inwards......

In this context, the idea that there was a "giant stone circle" at Waun Mawn seems more than a little preposterous.  And the idea that there was some communication between North Preseli and Stonehenge with regard to the "magic diameter" of 110 m seems even more absurd.  If there was a stone setting of any sort at Waun Mawn it must have been crude and unfinished -- and a part of an assemblage of megalithic structures in the Tafarn-y-bwlch - Brynberian - Foel Eryr area.  At a rough count, there are at least 20 prehistoric structures using blocks of stone (all erratics) in the vicinity -- all ignored by Mike Parker Pearson and his team.

The impression gained from the prehistoric remains is that North Pembrokeshire did have a "megalithic culture" with links to Ireland and other parts of Wales, but that it was relatively unsophisticated.  It follows that there were probably not huge manpower resources available, and probably no awareness at all of anything further east than Carmarthen, let alone as far away as Stonehenge....

As we have seen, the evidence for a vast stone circle at Waun Mawn is extremely flimsy, and the evidence for Parker Pearson's exotic narrative of quarrying and bluestone transport looks ever more ridiculous. 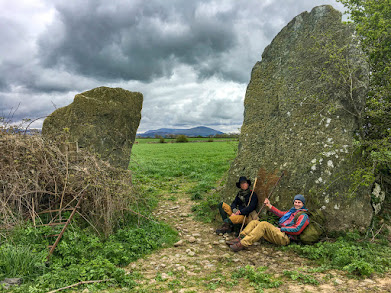 Two big standing stones -- all that is left of the putative Bryn Gwyn stone circle.
By the way, here is one example of a short study which does demonstrate, rather conclusively, that there was a small stone circle on Anglesey.  The identification of stone sockets is accompanied by good documentary evidence and evidence of associated artifacts.  Infinitely more convincing than the work at Waun Mawn....... and I dare say that Bryn Gwyn has no connections with Stonehenge either.Reference:
BRYN GWYN STONES, BRYNSIENCYN, ANGLESEY EVALUATION EXCAVATION 2008 PRELIMINARY REPORT
by George Smith
Cadw Project No. G1629 Report No. 790

Extract
Burl records about 900 stone circles in the Britain and Ireland, with several areas of concentration, but not in Wales where circles are relatively few and widely dispersed. In north-west Wales there are only two extant examples of large open circles, these being the Druid's Circle at Penmaenmawr and the circle at Bryn Gwyn. There are smaller circles around Penmaenmawr and at Cerrig Arthur, Meirionnydd and another possible at Pant y Llan, Arthog, Meirionnydd. There were also two probable examples, both destroyed, at Cae Coch and Cwm Mawr, both near Tremadog, Gwynedd. There are other circles with more numerous smaller stones that have more in common with ring cairns, to be found at Llecbeiddior and nearby Hengwm, Llanaber, Meirionnydd. The open circles of large stones at Penmaenmawr and Bryn Gwyn are distinctive and both lie close to other major monuments. At
Penmaenmawr there are large ring cairns and other types of cairns nearby and Bryn Gwyn is
close to the probable henge of Castell Bryn Gwyn, 300m to the north-east where pottery
suggests use in the Later Neolithic (Wainwright 1962). Further to the east at Tre'r Dryw Bach
another large circle, of smaller stones than at Bryn Gwyn, was also reported by 18 th century visitors but has since been cleared away. Study of the topography and of aerial photographs has failed to find any hint of the location of this second circle and it might be difficult to ever re-locate as its smaller stones may have left no obvious pits.
---------------------
This is a very relevant post from 2012:
https://brian-mountainman.blogspot.com/2012/03/stones-in-wales-wood-in-wessex.html