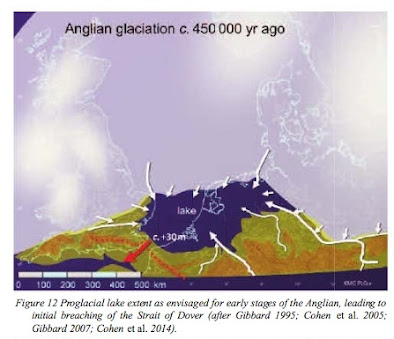 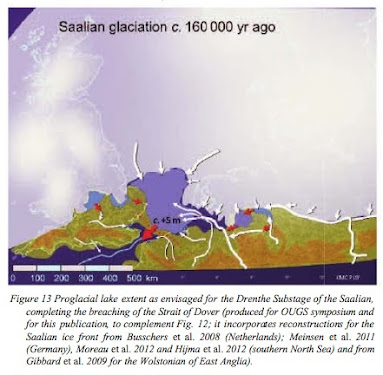 This article contains a useful reminder that while we are all preoccupied with the Devensian Glaciation (naturally enough, since its deposits are all over the place) we must not forget that there were two other great British glaciations -- referred to as the Anglian (Elsterian) and Wolstonian (Saalian).  Gibbard and Cohen remind us that during both of these glaciations the ice of the British and Irish Ice Sheet (BIIS) covered Wales completely and also spread into Somerset and the Bristol - Bath area.  The Anglian Glaciation, around 450,000 years ago, was the more extensive of the two -- but not by very much.
The evidence in the field is difficult to interpret, but these two authors have assembled a vast amount of information, and I don't think they are far off with their ice edge reconstructions.  These do of course match quite closely the modelled glacier behaviour in the reconstructions by Hubbard et al and Henry Patton.  The ice edges are highly generalised, and it is highly likely that natural depressions such as the Somerset Levels must have been filled with ice coming from the west.
Did the ice reach Salisbury Plain on either of these two occasions?  This is a distinct possibility, and when MPP says that the glacial transport thesis is "dead in the water" because this vast ice extent was impossible, I just wish he would read some of the literature.
------------------------------
Quaternary evolution of the North Sea and the English Channel
Prof. P. L. Gibbard
(University of Cambridge, Cambridge Quaternary, Department of Geography)
Dr K. M. Cohen
(Utrecht University, Rhine-Meuse Delta Studies, Department of Physical Geography)

Abstract
The island of Britain is surrounded by a ‘moat’ of water, of which the English Channel and the North Sea are two major components.This talk described some major events that occurred to shape these seaways and, in particular, the evidence preserved on the Channel seabed. Here a system of valleys occurs that was carved by the westward-flowing Channel River. At its maximum in the last glacial period this river was larger than any other river in Europe today. It carried water not only from the rivers currently entering theChannel, but also from rivers flowing into the southern North Sea. Today the Holocene is characterised by limited glaciation and there- fore high sea level. However, for much of the time, global sea level was lower, exposing shallow areas as dry land.Throughout the last 2–3Ma, the build-up and decay of ice sheets on the continents have driven spectacular changes of global sealevel. Driven by climatic fluctuations, these sea-level changes resulted in cycles of emergence and submergence of the Channel floor. About 500,000 years ago the English Channel and the North Sea were flooded, as they are today, but unlike today there was a sub- stantial land barrier, the Weald–Artois ridge, that linked Britain to the European continent. During cold periods up to 500,000 yearsago the two seas were drained by separate river systems: the Channel River, aligned along the Channel basin’s axis, drained towardsthe Atlantic Ocean, while in the North Sea the major rivers flowed northward. Although there were earlier events, the first major extension of a continental-scale ice sheet into lowland central Europe and Britain occurred c. 450,000 years ago (the Anglian advance). Critically, this ice advanced across the emergent North Sea floor fromthe mountains of southern Scandinavia and Scotland, blocking the northward-flowing rivers and causing an immense glacial lake todevelop in the basin south of the ice front. Once dammed, the water that continued flowing from most of western Europe’s riverscaused the lake level to rise. The substantial land barrier of the Weald–Artois anticline held up the water and it was this barrier that was overtopped and breached. The narrow waterway thus formed became the Dover Strait (a.k.a. Pas de Calais), linking the NorthSea to the English Channel.The breaching of the ridge to form the Dover Strait was critical to the evolution of the Channel from then onward, up to the pres-ent. It forced the rivers Thames and Scheldt to flow through the new Dover Strait and into the Channel River. This drainage systemcontinued to evolve for the next 200,000 years, but events were brought to a climax some 160,000 years ago when a second major con-tinental-scale glaciation occurred (known as the Saalian advance). The resulting megafloods sealed Britain’s fate: during high sea-level periods it would henceforth be an island.The implications of such striking geographical changes for plant and animal — including human — migration are profound, result-ing, among other things, in the impoverishment of British flora and fauna during warm periods such as today’s British climate, but providing a major route between the Continent and Britain during glacial periods. In addition, the rapid release of huge volumes of fresh water in megafloods into the Atlantic Ocean could have triggered changes in oceanic circulation, which, in turn, could have affected the climate of the whole North Atlantic region.
Posted by BRIAN JOHN at 23:28

Perhaps you might consider writing another post on this subject, written so as to make some archaeologists sit up and take notice. In particular, they need to at least realise that these very ancient glaciation may have affected parts of
Wessex geographical area long before e.g the later
Devensian.

Well, I have always said that ancient glacial deposits may well be incorporated into the "clay with flints" -- which seems to be a catch-all label for all sorts of sediments that have been inadequately studied. I have a post in mind on some of the inconsistencies of mapping and interpretation. Also, as I have always said, I would not be surprised if more erratic boulders or cobbles turn up -- I have already listed "strange boulders"in all sorts of locations across the SW of England, but other boulders and cobbles might have come from the north as well, since the southern margin of the English / Scandinavian ice is not at all well known.