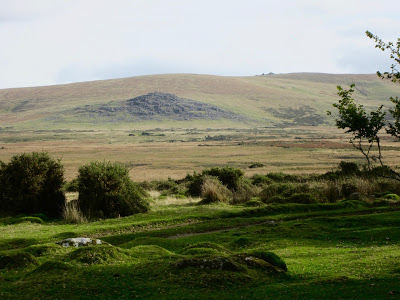 We will be seeing some fun and games over the declaration by MPP et al that one of the recumbent stones at Waun Mawn is made of spotted dolerite and that Richard Bevins has suggested that it came from Mynydd Bach, more than 4 km SE of Waun Mawn.  I won't believe that until I see the evidence in print, but it is a bit of a mystery how large ice-abraded boulders of "classic" spotted dolerite apparently got from the spotted dolerite tors like Carg Goedog and Cerrig Marchogion have ended up on the northern edge of the Brynberian moorland at Glanyrafon Uchaf:

These big rounded boulders have certainly not been carted 2 or 3 km from their places of origin by local farmers, since they are of no possible use as gateposts or for anything else -- and so the Preseli ice cap comes into the frame.  The boulders look as if they are incorporated into a moraine.  Maybe the little ice cap wasn't cold-based and stagnant after all .... ? 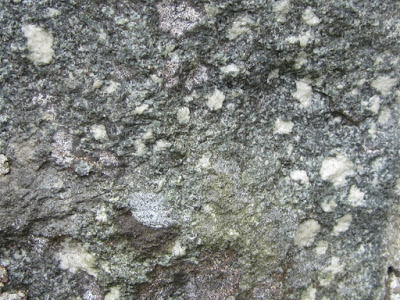 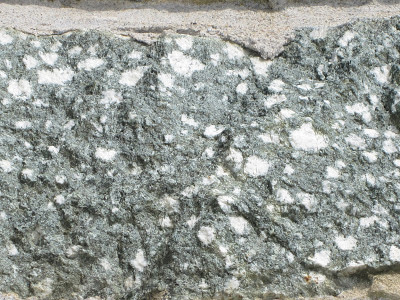 "Typical" spotted dolerite as exposed on fresh faces.  The "spots" vary in size, and are normally white or cream coloured, and are set in a blue-grey matrix of many different minerals.  The spots were previously thought to represent altered feldspar phenocrysts, but new research shows them to be fine-grained intergrowths of chlorite, epidote and albite.
Traditionally, spotted dolerites like those above have been deemed by the geologists to have come from Carn Meini, Carn Goedog, Carn Gyfrwy, Carn Bica, Carn Sian, Carn Ddafad-las, or another of the smaller tors on the crest of the ridge.  Bit there are plenty of other dolerites outcropping on the mountain which I would call "speckled" rather than "spotted" in that the white spots are less distinct but more numerous. The matrix also appears more flinty and less gritty to the touch.  Here is one example, collected just the other day: 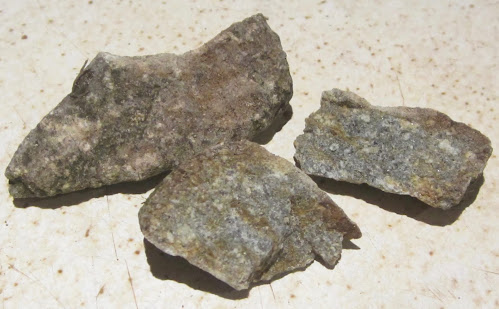 The problem with these specked dolerites is that when you look at their weathered surfaces they look like spotted dolerites -- but they have probably not come from any of the above named tors.  The broken sample above came from near Bwlch Gwynt, and I have seen similar rock fragments elsewhere.  I don't know enough about the local geology to know where the outcrops may be -- but they are not differentiated on the BGS maps of the area.  According to the map, all of the material in these outcropping dykes is called "undifferentiated micro-gabbro".......
If fragments like these occur at Waun Mawn they may well have come from the western end of the Preseli ridge around Carn Fach -- and they may have been carried northwards by the ice of the Preseli ice cap down towards Tafarn y Bwlch and Waun Mawn.  I need to do some more fieldwork on the nature and distribution of the dolerite dykes -- just some of which are shown on the map.
--------------
PS.  Part of our problem is that there is very little in the literature about the "western dolerites"  -- almost all of the research by Richard Bevins and others is done on small fragments and thin sections of dolerite taken from outcrops to the east of Cerrig Marchogion.  In the field all you get to look at is weathered rock surfaces that may appear spotted or speckled or not at all -- and occasional broken or fresh faces -- and I'd love to see some research from petrologists and other specialists on the western outcrops.....