The ice edge on the Scilly Nunatak 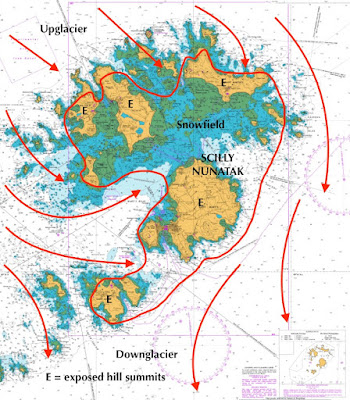 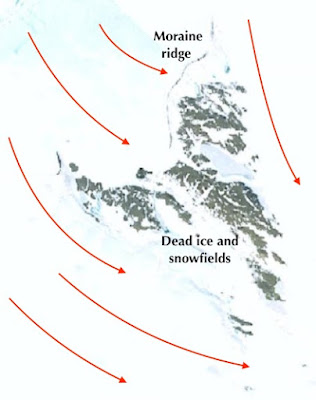 The above illustrations, showing two nunataks of very similar size, one in the Isles of Scilly at the time of the LGM, and the other near the eastern edge of the Greenland Icesheet today, prompt me to wonder what the nature of glacial deposits might be on up-glacier and down-glacier edges of the nunatak, and on its flanks.

For a start, we have to say that the nature of the glacial and other deposits will be very different on a rounded or gently undulating nunatak such as those shown above, and on a pinnacle or mountain peak projecting through the ice.  In the former case, glacier ice in contact with the nunatak will be capable of re-working or incorporating pre-existing brecciated slope deposits on steeper surfaces, weathered bedrock and materials such as old beach deposits (in the case of islands or coastlines that have experienced oscillating sea-levels and shoreline processes).  In the latter case, there will be a continuous supply of frost-shattered debris down onto the ice surface during the course of a glacial episode, and some of this -- or maybe all of it -- will be incorporated into glacial deposits.  Quite prominent moraines may be the result. 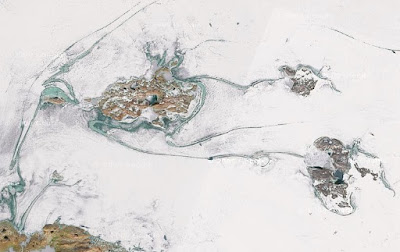 A cluster of nunataks near the edge of the ice sheet in West Greenland.  These are not very spectacular nunataks, but a great deal of debris has been eroded and picked up by the ice flowing around them.  The alignments and details of the morainic ridges are very confusing, showing that the pattern and history of ice-flow have been very complex.  Glacier ice is adept at filling in depressions, with minor ice streams sometimes flowing opposite to the regional direction of ice flow. 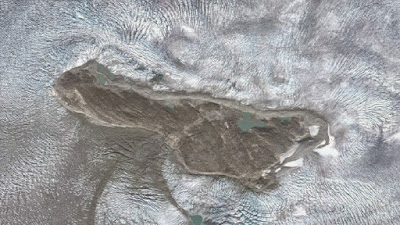 An isolated nunatak acting as a "blocking ridge" near the edge of the Greenland ice sheet, SW Greenland, inland of Nuuk. The ice from the ice sheet is flowing broadly from NE to SW here, and the ridge is more or less transverse to this direction of flow -- and is thus acting as a barrier. The pattern of crevasses is highly complex, but it is almost certain that the moraine on the northern side of the ridge is supplied by thrusting within the ice and the upward carriage of debris. If you look at the western end of the ridge, and then at the ice surface to the north, you can see a series of long linear crevasses transverse to the direction of ice flow -- almost inevitably these will be the surface expression of thrust planes within the ice. 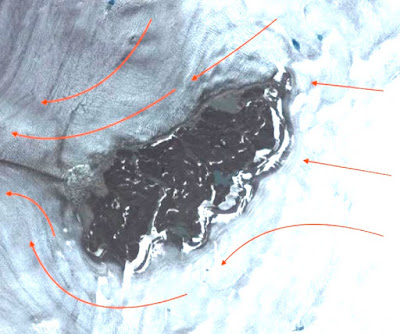 Another small nunatak near the western edge of the Greenland Ice Sheet, showing massive arcuate or looped moraines on the up-glacier side and a single medial moraine on the down-glacier side separating the ice streams that have diverged and then converged again.  Note the meltwater ponds sealed within the nunatak's bounding morainic ridges. 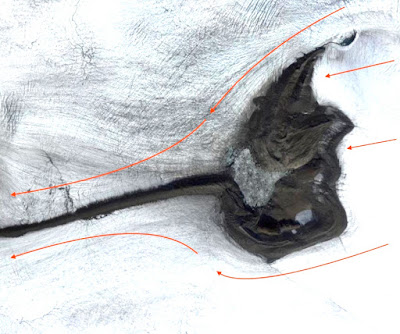 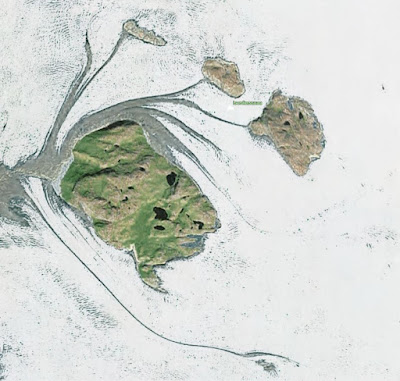 A group of four nunataks near the coast of SW Greenland.  Here there is a good vegetation cover on the largest nunatak, which measures approx 4 kms x 5 kms.  The moraines indicate very clearly what the ice movement directions are.  Here the ice is streaming between the nunataks, and the regional ice movement direction (east-west)  is disrupted by ice movement from SE towards NW, between the two largest nunataks.  Movement is maintained, although the ice thickness may well be less than 100m.

So what can we learn about nunataks close to existing ice edges?

1.  Where possible, if the ice surface level is high enough, flowing glacier ice will find its way into depressions between the landscape high points -- for example old river valleys or the straits between islands -- even if that means that it will be flowing in a direction vastly different from the regional ice flow direction.

2.  If the ice is too thin or sluggish to overwhelm a nunatak, some valleys and depressions on its surface will remain ice-free, and may be occupied by perennial or seasonal snowfields, or by meltwater lakes.

3.  On the up-glacier or proximal flank of a nunatak, one or more ridge of frontal moraine may be formed (we will not call these terminal moraines because the glacier terminus may actually be many kilometres away, down-glacier).

4.  Because there is no other source of debris supply, all of the material in the frontal moraine will have been entrained from the up-glacier bed and then brought to the surface by shearing and other processes.  Some of the till associated may be lodgement till laid down under thin ice, and we would expect to find evidence of glacitectonics and rearrangement or redeposition of diamictons.

5.  It would not be surprising, in a situation like the Isles of Scilly, to find ancient raised beach deposits incorporated into till or morainic materials as ice has moved onshore.

6.  Neither would it be surprising to find glaciofluvial or lacustrine materials laid down on the nunatak, especially in valleys and other depressions.

7.  Further marginal moraines may be formed on the flanks of the nunatak, including some material eroded from the nunatak itself, if the flowing ice has sufficient power.

8.  The formation of moraines, and the deposition of till, on the down-glacier flank will depend partly on sediment supply and partly on the extent to which a dead -ice zone provides some protection.  In the ice, complex shear structures and crevassed zones may be found some distance away from the nunatak itself.

9.  The up-glacier glacial deposits will always be at a higher level than those in down-glacier locations.    The gradient of the deposits on the nunatak flanks may however not be regular, and there may be icefalls or sudden changes in ice gradient in response to underlying topography or changes in iceflow characteristics.

10.  The time factor.  It is clear from looking at the morainic ridges on current nunataks that some are very prominent and abundant, suggesting that the nunatak has existed in its current configuration for a long period of time.  Nunataks that are effectively covered with moraine ridges suggest a gradual lowering of the ice surface and a rather dynamic glacier regime with an abundant sediment supply.  A nunatak almost devoid of prominent moraine ridges may indicate a very rapid lowering of the ice surface and / or a surrounding ice mass that is sluggish or even dead.  If moraines are absent or poorly developed on the up-glacier flank, this may indicate that the nunatak was affected by glacier ice for just a few centuries or decades.

It should be emphasised that there is no prominent moraine ridge anywhere on the Isles of Scilly today; the established (or disputed!) ice limit has been fixed by reference to glacial and glaciofluvial deposits found at many locations around the northern and western coasts.  This suggests that the ice was present for a relatively short period of time -- measurable in decades or centuries rather than millennia.

Virtually all of the geomorphology research on the Isles of Scilly in the last 20 years has been underpinned by the assumption that the ice edge recorded on the northern coasts marked the maximum extent of Late Devensian ice in this part of the Celtic Sea.   There has been much discussion on the nature of the deposits, the mechanisms of emplacement and deformation, the Quaternary stratigraphy and the classification and naming of the various deposits.  As explained in my 2018 paper, I am not entirely happy with the nomenclature proposed by Scourse, on the basis that it is unnecessarily prescriptive and too complex.  Be that as it may, there is nothing in any of the papers cited below which suggests that the Nunatak hypothesis is at fault.

From an examination of the modern analogies mentioned above, we would expect to find the highest glacial traces (around 40m above sea-level) along the northern coasts, with traces reducing in altitude southwards.  On the west coasts of St Marys and St Agnes the traces are close to sea-level.  There might still be undiscovered traces around sea-level on the east coasts as well.  On the south coasts of the southern islands I would expect all traces of the Devensian ice cover to be located below present sea-level.

Glacial sculpting and post-glacial drowning of the Celtic Sea.
Thesis submitted in accordance with the requirements of Bangor University for the degree of Doctor of Philosophy
By Edward Alan Lockhart
School of Ocean Sciences Bangor University, Wales
August 2019(PDF)

Hiemstra, J.F. and others (2006) New evidence for a grounded Irish Sea glaciation of the Isles of Scilly, UK. Quaternary Science Reviews, Volume 25, Pages 299-309.