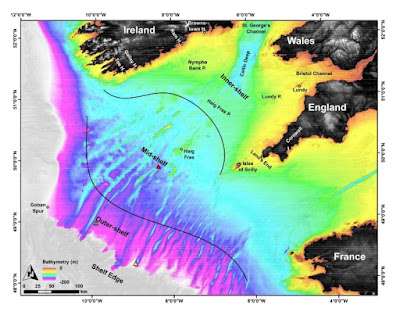 Ed Lockhart's doctorate thesis on the glaciation of the Celtic Sea is freely available on Researchgate.  Very interesting! It's long and detailed, as befits a doctorate thesis, and there is no point in trying to summarise it, but there are a number of points of relevance to our discussions on this blog about glaciation and its role in the transport of the bluestones of Stonehenge.

Here is the link:


Glacial sculpting and post-glacial drowning of the Celtic Sea.
Thesis submitted in accordance with the requirements of Bangor University for the degree of Doctor of Philosophy
By Edward Alan Lockhart
School of Ocean Sciences Bangor University, Wales
August 2019(PDF)

Concerns as to the stability of present-day ice sheets and their future contribution to sea-level rise have prompted the investigation of palaeo ice sheets in order to study ice dynamics and evolution through deglaciation. Such observations of ice sheet behaviour are essential in the process of constraining and validating numerical ice sheet models in order to forecast the future response of Greenland and Antarctic ice sheets to warming and sea level rise which can rapidly destabilise marine-terminating margins and contribute to global sea-level rise. Therefore, a palaeo ice sheet of similar characteristics to Greenland and Antarctica is required in order to accurately capture the occurrence of marine ice sheet instability. A suitable analogue is the last British-Irish Ice sheet, which was drained by numerous marine-terminating ice streams. The largest of these was the Irish Sea Ice Steam (ISIS), which terminated on the continental shelf of the Celtic Sea. New modern geophysical and sediment core data collected during numerous scientific cruises of the Celtic Sea provide a unique opportunity to determine the stratigraphic position of glacial sediments and the origin of the ridges from which these sediments were recovered, and to investigate the imprint of glaciation and thus reconstruct deglacial dynamics.

Seismic data of the mid- and outer-shelf show that the largest shelf ridges in the west comprise two vertically stacked units which are draped by superficial deposits. The upper sandy bulk of these megaridges is correlative to the Melville Formation (MFm), comprising truncated and dipping bedding planes, which overlies mounds of the Upper Little Sole Formation (ULSFm) comprising Last Glacial Maximum glacigenic sediments that are exposed on the lower megaridge flanks. Stiff and deformed glacigenic sediments comprising the ULSFm record their overriding by the ice margin during its oscillatory retreat across the shelf before being partially eroded during marine transgression by megatidal conditions which fuelled the development of overlying sand ridges comprising the MFm. This updated stratigraphy suggests the presence of a glacigenic core under the MFm on the western shelf. In the east, channels of the ULSFm contain undisturbed seismic facies of unknown lithology, with implications for the ice margin extent in the French sector. Multi-beam bathymetric data reveal a large assemblage of seafloor glacial features preserved on the inner-shelf, including terminal and ribbed moraines, streamlined bedrock, iceberg grounding pits, meltwater channels and tunnel valleys. These features record the southwest advance of a grounded warm-based ice lobe and its northeast marine deglaciation in response to rising relative sea level into St. George’s Channel and towards the southern coastline of Ireland.

These findings provide new palaeo observations of ice stream instability, whereby the ISIS rapidly broke up through calving in response to fracturing and thinning due to instability induced by ice margin flotation and deformable proglacial sediments in a rising relative sea level environment. Such factors need to be considered in the stability of present-day marine-terminating ice sheets. The maximum extent and subsequent northwest retreat of the ice margin across the mid- and outer-shelf, followed by more-complex retreat patterns on the inner-shelf, provide a framework against which numerical whole ice sheet models can be tested. Combined, these observations have implications for the study of ice stream stability and the validation of numerical ice sheet models.

The bulk of the thesis is made up of detailed analyses of the sediments and sea-bed glacial landforms of many types spread across virtually the whole of the Celtic Sea basin, out to the shelf edge.

Let's just home in on some issues relating to the Devensian glacial history of the Celtic Sea.  This builds, in the thesis, on much prior work bt James Scourse and many others -- some of this already discussed on this blog.


Of particular interest is the material relating to the eastern edge of the Irish Sea Ice Stream (ISIS).
P 36  Quote:

In the east of the Celtic Sea, observations from the Isles of Scilly suggest that the eastern ice margin impinged on the north coast of the islands at 25.5 ka BP (Scourse, 1991; Smedley et al., 2017) but did not overtop them. North and south of the Isles of Scilly, the extent of ice to the east towards Cornwall and onto the eastern shelf is undetermined (Scourse et al., 1990). The previous grounded extent of the ice lobe in the Celtic Sea was proposed based on the southern limit of cored over-consolidated diamict, Melville Till (MT), at a boundary -135 m Ordnance Datum at the recovery site of core 49/-09/44 (Figure 1.4), south of which only Melville Laminated Clay (MLC) was found (Scourse et al., 1990). This spatial distribution of glacigenic facies across the shelf suggests that the ISIS was grounded out to this boundary on the mid-shelf, before terminating in a tidewater setting beyond which glacimarine deposition occurred (Scourse et al., 1990). The provenance of clasts within the MT was suggested to have been as a result of the southwest flow of grounded ice across the shelf, eroding the corresponding clast lithology which exists as bedrock to the northeast of the core locations (Scourse et al., 1990; Scourse and Furze, 2001). However, an alternative ice flow direction has been suggested adjacent to the Isles of Scilly which contradicts this southwest flow direction. John (2018) suggests that the Isles of Scilly were in contact with a terminal limit of the ISIS as opposed to a lateral limit, as suggested by Scourse et al. (1990), inferring that ice flow was from the northwest to the southeast adjacent to the Isles of Scilly.

The author correctly states my conviction that the last ice that affected the western coasts of the Isles of Scilly came in from the north-west and flowed towards the south-east. It cannot have done anything other than that -- since the ice near an ice margin always flows perpendicularly to the alignment of the ice edge.  On the edges of an ice sheet there is no such thing as a "lateral" limit -- every ice edge is a terminal limit.  Ed has, I think, been swept along by the prevailing belief that the Irish Sea Glacier was long and narrow, as portrayed by Roberts and many others -- ignoring the fact that low profile lobes will always spread laterally if they are not topographically constrained.  So if it reached the shelf edge (and the evidence is very convincing) it must also have spread eastwards into the Bristol Channel and the English Channel. 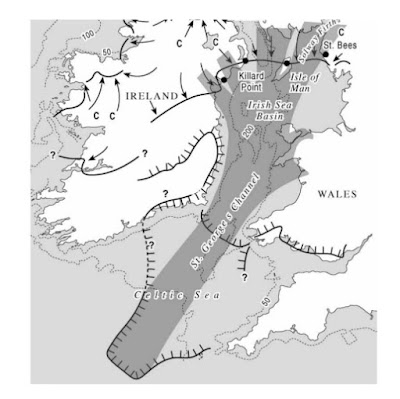 The Irish Sea Ice Stream (ISIS) as portrayed by Roberts et al 2007, and by many other authors.  It portrays a situation which is in my view glaciologically vanishingly unlikely........

If, as now seems to be established, the ice extended all the way out to the shelf edge, the WHOLE of the Celtic Sea as shown on the Roberts et al map MUST have been filled with glacier ice.  No evidence, as far as I am aware, has ever been produced to contradict this conclusion.  Indeed, towards the end of the thesis Ed does indeed conclude that this is what happened: 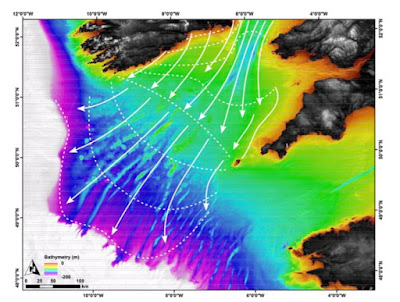 The extent of ice in the Celtic Sea piedmont glacier is, in this reconstruction, three or four times greater than that shown by other researchers.  It seems to me to be eminently sensible, and well supported by the bulk of the evidence presented in the thesis -- except for the eastern flank, where I am unconvinced by the suggestions relating to the Isles of Scilly and Cornwall.  I'll do another post on this.

Overall, a good thesis, although I have to say that if I had been the examiner I would have asked for much more detail on the interactions between the ISIS and Irish and Welsh ice and on how the marine evidence relates to the evidence from coastal sections in Pembrokeshire, Cornwall and Southern Ireland.  Much of that evidence just does not fit with Lockhart's central hypothesis -- so something is wrong somewhere.  But as with all theses, this one answers some questions but raises a whole host of others.........