Preseli -- where are all the stone rows? 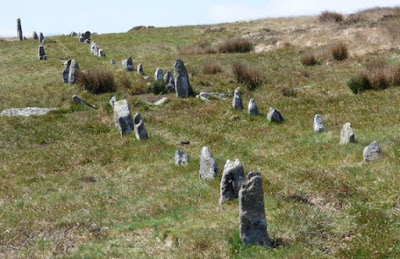 I have been intrigued for some time by the lack of stone rows in Preseli or North Pembrokeshire, given the assumptions that this must have been some sort of "special place" worthy of attention by the builders of Stonehenge.  (Assumptions which you, dear reader, will know that I do not share......)

They exist in apparent profusion on Dartmoor and indeed in other parts of Wales, but in North Pembrokeshire there are only three recorded -- all of them very dubious.

On the fascinating web site called "The Stone Rows of Great Britain" there is reference to stone rows at Parc y Meirw, Troed y Rhiw and Penmeiddyn.

Parc y Meirw, which I have described earlier, is deemed to have been 911 m long, but that is in my view a piece orf rather wild speculation for which there is virtually no supporting evidence.  All we know is that there are four rather standing stones in a hedge, with two of them functioning as gate posts in the past.  They are certainly impressive, if you can see them through the brambles, gorse and
hawthorns. SM 99858 35935

Citation: A single stone row measuring at least 911m long, including at least eight large-sized orthostats situated on south and west facing slopes. Unequal spacing indicates that it is very likely that many more have been removed. The row is orientated ESE to WNW, has both sea and landscape
reveals and may even have once extended further eastward. Traditionally the row has been seen as consisting of the four western stones which are set relatively close together.

Troed y Rhiw has also disappeared without trace, having been made of very small stones presumably simply moved away during field clearance work. SN 08792 35756

Citation: A possible single stone row only known from a description in the Royal Commission Inventory. The row which has since been destroyed measured 12.2m long and consisted of 24 contiguous, edge set stones with an average height of 0.60m leading from a stone circle formed by at least 12 stones. The row was situated on a west facing slope, was orientated east to west and stood in the vicinity of a stone pair and standing stone.

Penmeiddyn, not far from Manorowen, is also recorded but now entirely destroyed. SM9241535584

Citation: A probable single stone row (possibly double in places) only known from a description in the Royal Commission Inventory. The row which has since been destroyed measured 79m long and consisted of about 54 stones. The four westernmost stones were about 1m high and others were much smaller with many just protruding through the surface. The row was situated on a south west facing slope, was orientated north east to south west and stood in the vicinity of standing stones and
barrows.

Nothing much to be excited about here. There are no other stone rows within 30 miles, and the destroyed rows at Mynydd Llanybyther (SN549395) and Bancbryn (SN68936 10326) are not much to write home about either -- although the latter (discovered in 2012) is described thus: A single stone row measuring 717m long, including at least 173 mainly small stones situated on a south facing slope with sea and landscape visual links and reveals. The row leads from a small cairn, terminates at the largest stone, is orientated north east to south west and stands between two cairn cemeteries. The visual links with Hartland Point and Exmoor are noteworthy. Excavation failed to provide a date but confirmed a lack of historic activity. 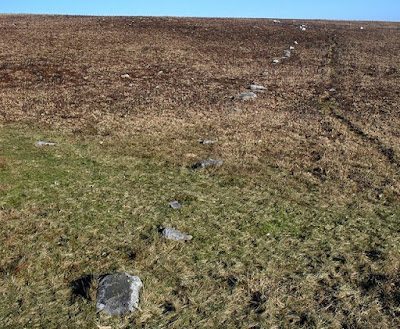 I am unconvinced that any of these is a genuine long "ceremonial" or "ritual" stone row like those of Dartmoor, and to me they look like Bronze Age or later field boundaries similar to those in the vicinity of Carn Alw on Mynydd Preseli.

So why was there no apparent interest in the creation of long stone rows in the Preseli landscape, given that there were abundant boulders littering the landscape?  Does that indicate a cultural preference, or a sparse and not very technically advanced local population?

In "The Old Stones" there is an interesting discussion of stone rows on page 61 by Sandy Gerrard,  and a comprehensive article on origins and interpretations here:
https://stonerows.wordpress.com/research/function/

Plenty of stone rows on Exmoor, many discovered within the past 50 years. Often had been covered by peat deposits.

Yes, I saw some references to those too. nothing at all convincing in Pembrokeshire. I think the only explanation is a serious cultural disconnect -- and a relatively "under developed Neolithic / Bronze Age community in the far west of Wales. That in my view helps to undermine the MPP thinking that there was some great "symbolic significance" about North Pembs which led to the extraction and haulage of all those famous bluestones. They (eg spotted dolerites and foliated rhyolites) certainly were not of any great significance in N Pembs -- why should they have been deemed special anywhere else?