Newgale -- 2020 exposures of the submerged forest 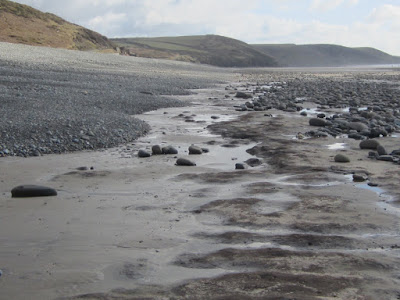 Extensive peat beds running beneath the storm beach ridge, which had been flattened and reshaped during the storms.  On the right, the residual "boulder bed" which is now a prominent feature of the area normally occupied by the sandy beach.  The beach has probably been lowered by around 2m. 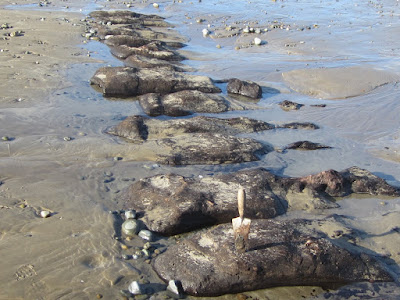 Gullied peat bed, with alternating rills and ridges.  This feature was much more obvious in 2014 -- created by the downwash from breaking waves. 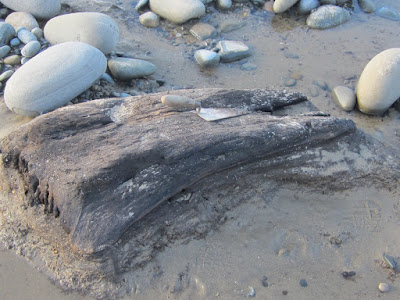 Remnant of a fallen tree trunk resting on peat.  There are many such features currently exposed at low water. 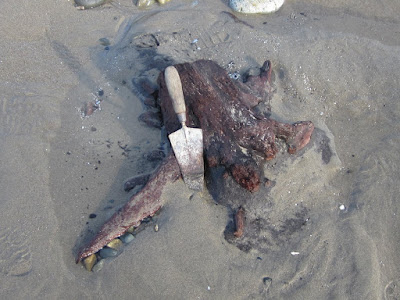 Broken tree trunk with remnants of the root system 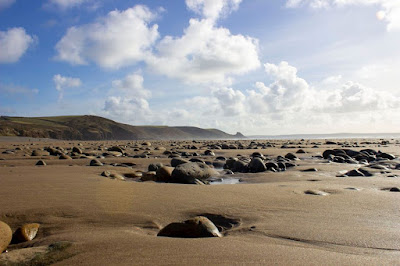 A wonderful photo from Jamie Crofts, with acknowledgement!  It shows the residual boulders interspersed with slight sandy embankments and exposures of the peat beds.  I suspect that many of these boulders are residuals from a till layer that is not very far beneath the surface. 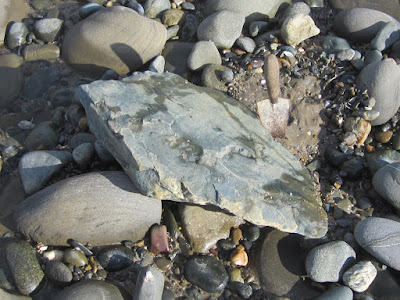 An erratic boulder with sharp edges exposed far out in the bay -- very different in appearance from the rounded beach pebbles.  There are many such boulders interspersed among more rounded boulders -- again suggestive of the presence of a till layer which is intermittently exposed.

The submerged forest at Newgale is currently very well exposed, following two severe storms during the month of February.  The photos show that the exposures are very extensive across a wide area littered with concentrations of well-rounded beach pebbles and also boulders up to 1 m in diameter.  In truth, the boulder litter is more spectacular than the peat beds and remnants of trees, branches and roots -- and there are no clear vertical sections in which one can see stratigraphic relationships.

In 2014 the relations between the various deposits were easier to see and interpret.  This is what I said at the time:

In trying to work out what has happened here, my best bet is as follows. There are some very old deposits here -- maybe dating from the last interglacial. These materials must have been overridden during the Devensian ice advance of the Irish Sea Glacier, but we see no signs of till or periglacial materials out here in the open bay. Peat beds and woodland then started to form after the ice retreat, when the coastline was far out to the west. So some peat beds might be more than 7,000 years old. I think these peat beds and the forest might have survived for at least 5,000 years -- this could be established by pollen analysis and examination of the tree species represented. The sea rose inexorably, and as it did so it drove a storm beach ridge eastwards, covering the old peaty / woodland area bit by bit, leaving it submerged beneath pebbles and sand. Within the last 2,000 years or so the eastwards advance of the storm beach ridge has slowed down as sea level has stabilised, but we know that it has continued because historical records show that there have been at least two other inns at Newgale, each of them in the area now submerged beneath the beach. The current Duke of Edinburgh Inn, alongside the road that has been blocked by pebbles several times this winter, is equally vulnerable -- and one wonders how long it will survive!

The interbedding of storm beach pebbles and peat beds suggests to me individual storm events in which waves have overtopped the ridge, flinging pebbles onto the peaty boggy area on the landward side -- then followed by more peat formation, when "normal" waterlogged or lagoonal conditions returned.

So it is quite possible that the peat beds are of all sorts of ages, with some of them shown in the photos above no older than a few centuries........ 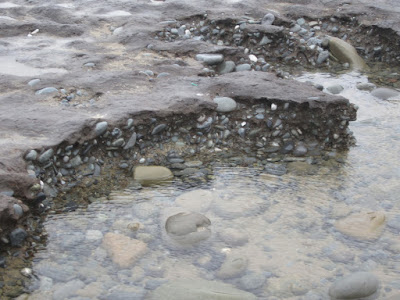 A 2014 photo showing thin peat resting on top of beach gravels.  I am inclined to think that this peat might date from historic time and may be less that 500 yrs old, developed in a boggy area on the landward side of the storm ridge as it moved inexorably eastwards.  During extreme events, pebbles are thrown over the crest of the storm beach ridge, settling in the boggy area beyond it.  Peat then forms above such pebbly layers and accumulates until the next big storm event occurs -- so there may be intercalations of several pebble beds and peat beds. They may not be laterally continuous.   Palynological and radiocarbon research will soon sort this problem out........ 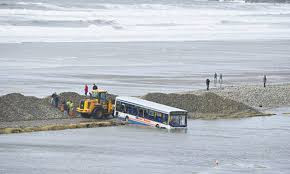 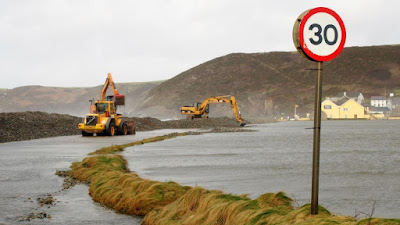 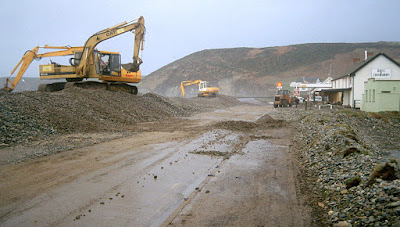 In Storm Barney in 2014 the storm beach ridge was breached in at least two places and huge quantities of pebbles were flung across the road and into the flooded area on the landward side of the ridge.  Events such as this must have occurred during the life of the ridge as it advanced eastwards from the outer part of St Bride's Bay over a period of 5,000 years or more.  Pebble layers derived from such events would then have been interbedded with peaty layers in the Newgale lagoon.

I see no reason to revise any of that.   But it is still difficult here to establish any sort of stratigraphy, and because storm damage is so extensive there are detached "rafts"of peat all over the place (sometimes slabs of peat rest on top of modern beach sand), and the remnants of tree trunks, branches and root systems which we can see are not guaranteed to be in their original positions.  This is a very dynamic environment!

On our visit to the beach, Ruth Crofts drew my attention to two subangular boulders which were stuck to pillars or pedestals of sticky grey clay.  We know that there are clay-rich layers in the peat beds and that some of them are clearly defined -- but the clay here is different, and this may be the most important observation of the afternoon! 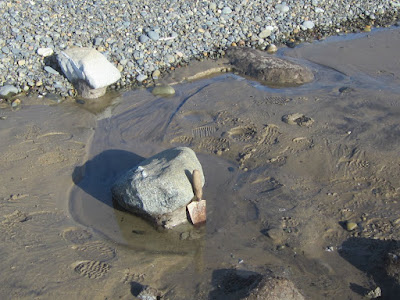 Two subangular boulders exposed at the edge of the storm beach ridge.  Note that both of them rest on pedestals of sticky grey clay with small stone inclusions.  I suggest that we are looking here at the remnants of a layer of sticky Irish Sea till. 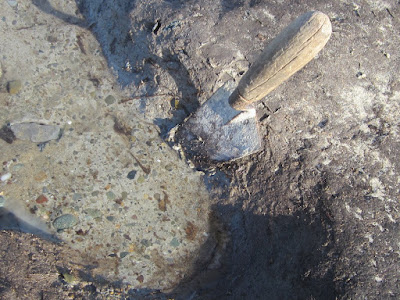 Nearby, the grey clay is exposed in a small pool and is seen to contain a wide variety of broken erratic fragments of many different shapes and sizes.  This appears to be till, directly overlain by a thin bed of peat.  This relationship is duplicated in Newport Bay.

In addition to the detached peaty remnants, there are several detached remnants of the concreted gravels which I mentioned in 2013: 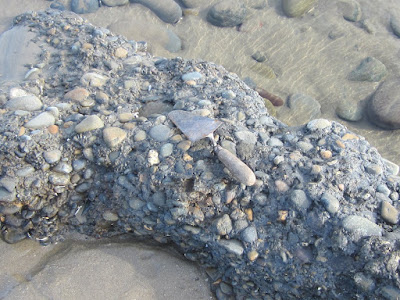 I'm puzzled by these, because they appear to be beach gravels solidly cemented with manganese oxide cement.  Are they fragments of a very ancient ( interglacial) raised beach which may be present beneath the Newgale till layer, or are they simply fragments derived from the interior of the storm beach ridge where hydrological conditions have been suitable for the precipitation of manganese and iron oxides?  There is a project there for somebody.........

There are still many questions to be asked and answered at Newgale, but my current best guess at a stratigraphy is as follows:

5.  Modern sandy beach capping oll of the other deposits.
4.  Storm beach pebbles contained within the migrating ridge and left behind on its seaward flank.
3.  Holocene peat beds broadly assigned to the "submerged forest" -- formed during sea level rise.  They may range in age from 8,000 yrs BP to just a few centuries BP.  Formed on the landward side of  the advancing storm beach ridge.
2.  Layer of clay-rich till containing many foreign erratics (Late Devensian).  Many of the large boulders scattered across the beach are derived from this till layer.
1.  Cemented interglacial (?) beach gravels -- detached fragments are now scattered across the beach.

Complications occur because of the breaking and repositioning of peat rafts etc during storms and intermittent stripping away of the beach sand, and because of the intercalation of pebble beds and peat beds on the landward side of the migrating storm beach ridge.

Your mention of sticky grey clay on Newgale rang a bell with me. There is what looks very similar sticky grey clay being exposed on one of Milford Haven’s beaches. I thinks it’s called Scots bay. It’s directly beneath the bandstand at the Northern end of the Rath. I’ve been going here on and off for 20 odd years. In that time I’ve seen it scoured once after the storms about four years ago. Then the clay was showing at the Northern end of the beach and in it there were tree roots and one small tree stump. I did take a picture of it but can’t find it at present, but seeing that obviously made me think about the sea level rise which created the Haven. Any way, the recent storms have scoured the middle part of this beach now and the same clay is showing, No tree roots visible there however. If you want to get down there for a look yourself I’d be happy to show you as and when convenient. Or you can park at the bandstand, see the gap in the railings nearby and go down the wooden steps there. That brings you to a small grass slope at the bottom of which is a tarmac path. Get down to this and follow it to your left ( as you face the sea ). Just a few steps along you’ll see on your right a little access down onto the beach. Once you are on the beach bear left and keep to the top of the beach . The clay is showing about halfway along..