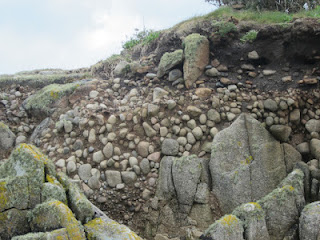 Raised beach of cobbles on St Agnes, Isles of Scilly.  This one is not far above HWM.  How old is it, and to what extent has it been modified post-deposition? 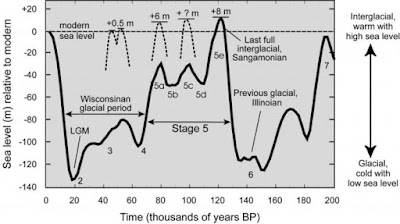 A commonly reproduced sea-level curve for the "stage 5" interglacial and the glacial episodes before and after it.  The new research suggests that following the "highstand" at the beginning of the interglacial, sea-level stabilised for maybe 10,000 years or more after that at a slightly lower level -- without violent oscillations.

Some important new material relating to the fixing of sea-levels during the last interglacial -- assumed to be the period during which most of the raised beach deposits (of which we speak quite often on this blog) were formed.  Essentially, this new research suggests that sea-level might have been 6m above present MSL in the early part of the interglacial (coinciding with major ice-sheet melting); that it then stabilised at around +2m for the rest of the interglacial; and that it then started to fall to its lowest level of -126m at the peak of the last glacial episode.

Of course, this does not necessarily give us a foolproof relative sea-level curve for West Wales and the Celtic Sea arena, since isostatic factors always come into play.  Even the weight of water flooding into the Celtic Sea will have had the effect of depressing the crust, leading to a greater than expected relative sea-level rise.  And delayed isostatic responses related to the addition and removal of ice loads will have complicated things further.  But gradually things become clearer.........

What we do NOT have here is information about earlier interglacial sea-levels -- ie those that might have influenced the cutting of the rock platforms which are almost certainly composite in age.

PS.  I did a post on this a few months ago:
https://brian-mountainman.blogspot.com/2018/09/eustatic-sea-level-changes.html
but I'm flagging this up again because of the current interest in raised beaches and their ages.

The main points of the new research:

The last glacial interval (which we refer to as Devensian, Weichselian or Wisconsin) was about 20,000 years ago, and sea level was about 126 meters (413 feet) below modern sea level at that time.

Turning to the Last Interglacial (Ipswichian):

"Globally, the climate was warmer by 1 to 2 °C during the part of the Last Interglacial Period referred to as Marine Isotope Stage 5e (MIS-5e) between 127,000 and 116,000 years ago," said Victor Polyak the first author and co-principal investigator and senior research scientist in the UNM Department of Earth and Planetary Sciences. "While this is a well-studied period, we still do not know the exact behavior of sea level during MIS-5e. What we know for certain is that sea level was higher when climate was 1 to 2 °C warmer 120,000 years ago.

The magnitude and trajectory of sea-level change during marine isotope stage (MIS) 5e of the last interglacial period is uncertain. In general, sea level may have been 6–9 m above present sea level, with one or more oscillations of up to several metres superimposed. Here we present a well-dated relative sea-level record from the island of Mallorca in the western Mediterranean Sea for MIS-5e, based on the occurrence of phreatic overgrowths on speleothems forming near sea level. We find that relative sea-level in this region was within a range of 2.15 ± 0.75 m above present levels between 126,600 ± 400 and 116,000 ± 800 years ago, although centennial-scale excursions cannot be excluded due to some gaps in the speleothem record. We corrected our relative sea-level record for glacio-isostatic adjustment using nine different glacial isostatic models. Together, these models suggest that ice-equivalent sea-level in Mallorca peaked at the start of MIS-5e then gradually decreased and stabilized by 122,000 years ago, until the highstand termination 116,000 years ago. Our sea-level record does not support the hypothesis of rapid sea-level fluctuations within MIS-5e. Instead, we suggest that melting of the polar ice sheets occurred early in the interglacial period, followed by gradual ice-sheet growth.
Posted by BRIAN JOHN at 09:57