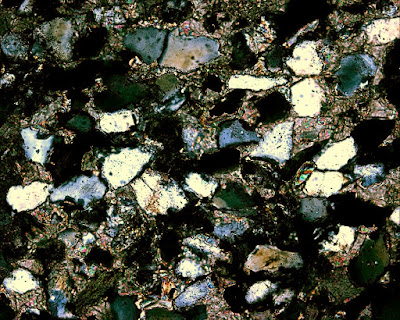 Don't get me wrong. I just love the idea that the Altar Stone at Stonehenge has come from the ORS Senni Beds -- but since this is a scientific blog, every now and then we need to ask some inconvenient questions.

The current orthodoxy is that the Altar Stone is from the Senni Beds -- and not from the Cosheston Beds on the shore of Milford Haven. The foundation of all of that is the paper by Ixer and Turner-- much cited -- dating from 2006. That's quite a while ago, in geological terms.

Reference:  Ixer, R.A. and Turner, P. 2006. A detailed re-examination of the petrography of the Altar Stone and other non-sarsen sandstones form Stonehenge as a guide to their provenance. Wiltshire Archaeological & Natural History Magazine 99, 1–9.

I have been looking at the paper again, and am forcefully reminded that there is actually a huge amount of doubt surrounding this identification. The centrepiece of the work by Ixer and Turner was a thin section from the Salisbury Museum collection, labelled "277 Altar Stone Stonehenge."  Who took the sample, and when?   Is sample 277 one of the Cunnington samples?  Quote: "Cunnington (1884) identified five fragments of the Altar Stone, that he assumed resulted from dressing of the stone, amongst his loose finds, although they are now missing."

Quote: "Therefore, the thin section labelled ‘277 Altar Stone Stonehenge’ in the Salisbury Museum Collection is likely to remain, for the foreseeable future, the only piece of the monolith available for investigation. It is imperative then that it should be described as fully as possible and that this description becomes widely available."

This, paper represents the first detailed description of the Altar Stone for over eighty years and is in broad agreement with H.H. Thomas other than his identification of abundant garnet and glauconite. Glauconite is a green, chlorite-like mineral and so, if present, has been subsumed under chlorite in the present description. The disparity over the amount of garnet is more significant and puzzling. Thomas noted significant amounts of garnet in his ‘heavy residues’ (Thomas, 1923, 244) but did not report garnet in his thin section description of the Altar Stone. Although trace amounts of garnet can be overlooked/underestimated in thin section the present study could not confirm significant amounts of garnet microscopically. The presence and amount of garnet is important as Thomas was struck by the coincidence between the garnet-rich nature of his Altar Stone ‘heavy residues’ and the unusually garnetiferous nature of the Cosheston Beds and it was the presence of these unusual amounts of garnet in both, that led him to suggest the Cosheston Group might have been the origin of the Altar Stone. Without further sampling (this would require many grammes of Altar Stone to crush before separating the heavy minerals) the garnet problem must remain unresolved.

The big issue here is the amount of garnet among the heavy minerals in the rock.  Herbert Thomas and Richard Thomas have both stated that there are substantial amounts of garnet in the Altar Stone itself -- but garnet is missing from thin section 277.  There are also substantial amounts of garnet in the Cosheston Beds.  So was HH Thomas right all along?  And have Ixer and Turner simply assumed that thin Section 277 was correctly labelled, when it might have just come from a piece of debitage  assumed -- unreliably -- to have come from the Altar Stone?

A simple matter of a sample being mislabelled?  The mystery deepens.........

Yes.
The altar stone problem is further discussed in the pet rock boys papers
Chips off the old blocks and the most recent paper on the sandstone, the lower palaeozoic sandstone paper.
H.h.Thomas description must now be taken with much salt.
Wait for the pet rocks boys paper on HHThomas out in Antiquity next year.
Once they are out the problem largely goes away.
Both Thomas's were using mislabelled material.
The material BJ collected from Mill Bay is described and is part of a sst paper half written. It was top of the list but has slipped to third. It is a paper the pet rock boys want to write..

I am still confused. So are we right to assume that the Altar Stone has never been sampled, and that we still have no idea where it came from?

"Assume what you will". Was that in the First Folio??

The Altar Stone has not been sampled in the 20th or 21st centuries. S277 is a 19th century sample and is the best bet historically and petrographically for the Altar Stone.
Dr Ixer certainly believes it is but .....read Chips off and LPS paper for further comment.

As to whence the Altar stone comesm who knows, not the Preselis.

The discussion of HH Thomas is best left until the Antiquity paper is published although there may be some illumination at the Oxford Lithics Conference in a couple of weeks and something perhaps in the London Times.

The OU unpublished work on sst debitage (the other Thomas) from SH crossed their wires wrt the Altar Stone and mislabelled their samples or rather mis-attributed them -all cleared now.

This all needs the Mill Bay paper to spell it all out slowly and finally.

Clicked on the link: Access denied Again! These academics really don't like the proles to read what they're at do they?

Suppose I'll just have to sit her awaiting a visit from the men from Minilove?

Must get back to the telescreen my state aerobics class is just starting!

What a shame! Tim Berners Lee invents the internet, with the intention of allowing free access to academic research for all, Yet his fellow academics viewed and used his invention solely as a means for self aggrandisement? An opportunity that humanity has missed I believe!

Just have to continue waiting for a lottery win!

Although I could email said academics and beg and grovel for crumbs from their high table, but being a product of my upbringing. Begging and Grovelling didn't feature!

AG -- go on, swallow your pride! I am also blocked out behind paywalls most of the time, but when I write to the lead author and ask for a PDF he/she almost always obliges -- and is flattered to be asked.

Altair stone is a BLUESTONE.