Yet another Stonehenge experiment 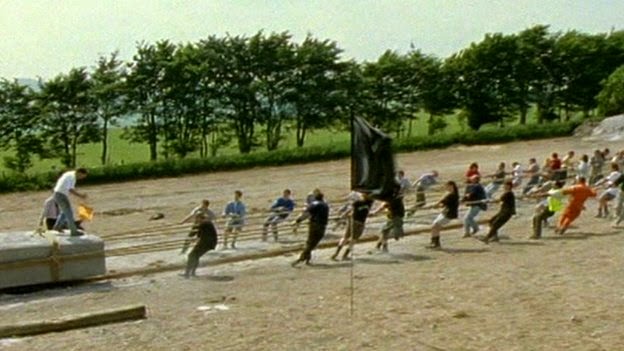 A pic from the previous experiment.  Photo: Tim Daw

Another Stonehenge experiment coming up...... The appetite for Stonehenge stories is insatiable.  And yet another BBC Stonehenge spectacular is apparently planned.   You'd have thought people would be fed up by now with "Stonehenge mystery finally solved" stories, but onwards and upwards it all goes.....


Stonehenge experiment to be repeated with ‘lost’ stones

Another attempt is to be made to solve the mystery of how the largest stones used to build Stonehenge were moved.

In 1996, a BBC TV programme aimed to find out how the stones for the largest trilithon were put into place, and how the lintel was placed on top.

Since then the concrete replicas have remained untouched and forgotten about at an army base on Salisbury Plain in Wiltshire.

They have now been rediscovered and the experiment will be repeated.

Archaeologist Julian Richards is teaming up with farmer Tim Daw see if modern techniques are any more efficient.

Mr Daw, who farms at All Cannings, near Devizes, and who created the first "Neolithic" long barrow to be built in the UK for 5,500 years, also works part-time at Stonehenge.

He said one of the most popular questions asked by visitors is 'how were the giant stones moved?'.

"When Julian Richards mentioned there was a life-sized replica of the largest stones at Stonehenge that were looking for a home that we could do some experiments on I said 'let's do it'."

The 45-tonne replicas were used in the BBC documentary Secrets of Lost Empires: Stonehenge, which was broadcast in 1996.

They have remained at Larkhill Camp, about a mile from Stonehenge ever since.

The experiment was partially successful, but now new theories have emerged about how the stones may have been moved.

"The first thing is to collect the stones from Salisbury Plain where they have been languishing for the past 20 years and get them back to my farm," said Mr Daw.

Mr Daw said different theories had now emerged about how the huge stones could have been moved.

"The experts certainly think they know more. Whether they actually do know more is an interesting question.

"Without trying all the wonderful ideas of how you do it Neolithic style, just using man power - no wheels, no draught animals, no machinery - we can't tell what is practical and what is just fantasy."

It is hoped the result of the experiment will be turned into another television programme to air next year.

A fair amount of experimentation was also carried out at the Stonehenge Summer Solstice in the (relatively recent) past.... quite a few ended up at least Eight Miles High.....

Suppose The Romans used concrete.... but weren't they around in Britannia a lot later than 2500 BC?
I don't think this Story will stand up.

"Chestnuts roasting on an open fire....."

This old chestnut has come out again, courtesy, again, of enthusiastic Julian Richards, and added impetus from Tim, who'll also hope to get extra publicity for his cosy 21st Century Long Barrow Mausoleum at All Cannings on the Marlborough Down.

Julian Richards (one of two prominent archaeologists with that name) was interviewed at Larkhill Camp, just north of Durrington Walls and a little further from Stonehenge iself, on BBC TV's Points West this lunchtime.
One of the 3 concrete replicas that formed the copy of the largest trilithon was just being loaded onto a vehicle to take it off to the Marlborough Downs.