Williams on the rills and grooves 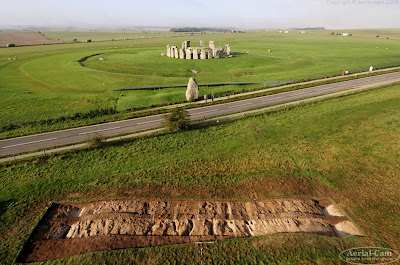 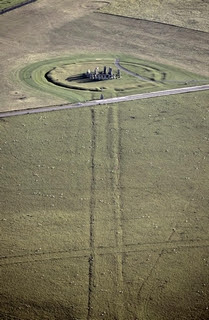 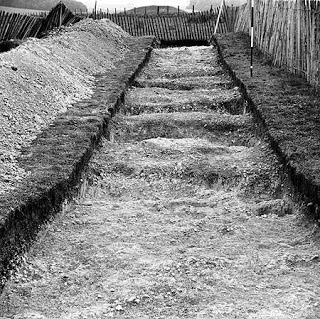 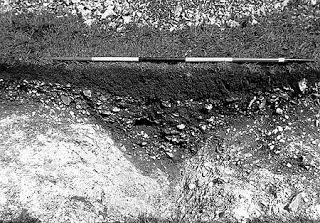 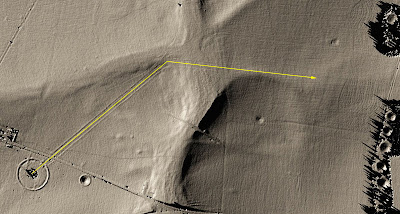 Above I have reproduced some of the images relevant to the "periglacial stripes" debate. (By the way, these features were not "discovered" by MPP and colleagues -- Martin Trott described them in 1988, and apparently Atkinson knew about them as well. Trott saw no great significance in them, and referred to them and to solution hollows in the chalk surface.  Here is a cutting reproduced from Tim Daw's "Sarsen" blog: 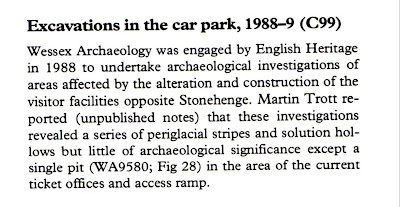 
I think the rills are anastomosing and irregular, with individual channels or gullies extending for maybe just a few metres before joining other rills or splitting -- with the sort of pattern we see on braided rivers on glacial outwash plains.  As I have said before, I do not see any evidence of any rills extending for hundreds, or even tens of metres.  If we look carefully at the second image above, we can see that there is one slight trace of a feature extending for maybe a hundred metres to the left of the Avenue embankments.  To me, that looks man-made.

On the bottom image (which Neil has used on another forum discussion) we can pick up all sorts of details.  Some of the "texture" might be down to old plough marks -- but there are many very subtle features which one can only pick up on if you enlarge the photo.  (Click to enlarge.)  There are even some slightly winding or meandering features, and some things that look like solution hollows.  I would really like to knoe what the features of the solid geology are in this area......

Finally, I came across this chapter by RBG Williams, who has written very extensively about the periglacial landscapes of Britain:

This book is long since out of print, but if you google the chapter, you will find it on Amazon, and it so happens that Ch 17 is on of the chapters you are allowed to read online..........

Here are a couple of short extracts: 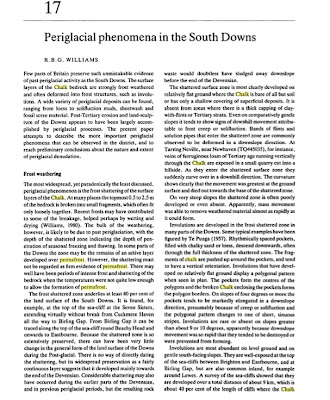 Williams talks about frost shattering of chalk surfaces during the Devensian and earlier glacial episodes, sheetwash, solution processes, and the formation of rilles under a number of different scenarios.

This all accords very nicely with what I have been saying.  As Neil has confirmed, these features are everywhere on the chalk downs.  Maybe the features owe part of their origins to surface and subsurface runoff and solution during the Devensian -- maybe when there was an intermittent permafrost table which provided an "impermeable" layer a metre or two under the ground surface.

It may be that the features are still forming today, with water concentrated in the subsurface rills when there are periods of heavy and continuous rainfall -- so that the infiltration capacity of the chalk is exceeded.

Looked through the material you've posted as best as I could. Quoting from the Williams insert in your post:

Nowhere did I read anything about 'solutional rills' running in a very defined space (eg between the Avenue banks) diagonally straight to the down-slope.

This is the real mystery of the Avenue stripes that no one is addressing.

RBG Williams paper is out of print because it's a load of old nonsense.

Clement Reid explained that this 'phenomena' was caused by torrents of water not permafrost.

Anyone with half a brain-cell can see this, by the huge depth and level of disturbance shown in the 'structureless chalk' which are concentrated in the dry valleys and completely devoid on the top of flat plateau's of 1 - 3 kms with no valleys for any frost effected chalk to run down into (hence his qualification "the frost shattered zone underlines at least 80% of the land surface of the South Downs").

Let us not forget that Reid has creditability for finding 'Doggerland' when all other geologists doubted him.

Mike Parker Pearson does give us a great deal of information on the extent of the so - called periglacial stripes in his 2012 book, including the views of Charly French and his geophysics specialist, Kate Welham. These comments are well worth re - reading. MPP's initial expectation was that the grooves might turn out to be [Medieval or later] cart tracks. He does go into detail on the findings.

So the Avenue stripes as such are confined to the Avenue. Whether or not these run the length of the Avenue is a legitimate question. My feeling is they do.

Otherwise, why draw such attention and significance to them if just a 5m length of stripes marked the landscape? Would MPP make a small natural feature like that (similar in kind to what you argue exists all over the landscape) such a big deal to bet his narrative on? Something more spectacular and unusual is needed to make MPPs made-up story credible even to 'true believers'.

All this is consistent with strong water flow confined by “structural controls” on the SURFACE. Can't see how your 'subterranean bedding' hypothesis can explain any of this!

Anon and Kostas -- please go away and read some geomorphology.

Not only did "Neil use this image on another Forum", but he actually made it.
I have a million more if you need any graphics made.

Thank you Neil -- happy to acknowledge that -- it is a fantastic image. The resolution is extraordinary...and if one had more time one could spend hours poring over it and picking up little details......

Please don't keep us in suspense! What does MPP say about the extend of these Avenue 'stripes'? Do they in fact run the length of the first segment of the Avenue? And what lies beyond left and right of the Avenue banks? What has convinced MPP these are not cart tracks?

Buy or borrow MPP's book, I am not going to type large sections of it as I have a muscular health condition which causes compications from over- typing etc.

His book must by now be out in the USA. Neil will confirm MPP has also been to Newfoundland, so he may be speaking at a venue near you soon, Kostas.