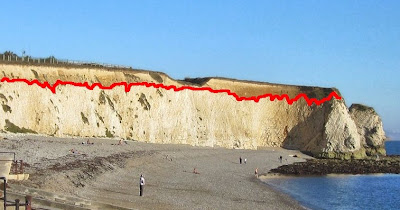 The chalk cliffs at Freshwater Bay, isle of Wight (Ian West).  Although this is a distant shot, you can see how undulating the surface of the "solid" chalk is -- marked by the red line.  The chalk which looks solid is actually pretty smashed up.  The undulations are explained by reference to bedding structures, shear planes and fault lines, and even bands of flint nodules which can allow water and root penetration.  Above the red line is the regolith -- a mixture of coombe rock, clay with flints and soil with some brickearth -- up to 4m thick.

The upper surface of the chalk at Harry Rocks, Dorset (Ian West).  here the junction between bedrock and regolith is even more irregular -- click to enlarge and see the details.  The "low points" are solution pipes or rilles where water flow -- and solution -- are concentrated. 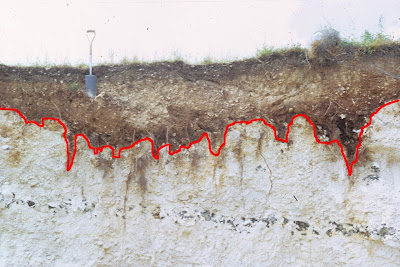 A close-up of coombe soils and the underlying chalk on Salisbury Plain.  Again the junction is highly irregular.  Note the band of flint nodules lower down.

Because it's not easy to see sections through the Upper Chalk and the soil layer on Salisbury Plain, it's best to look for parallels where the cliffs on the coastline do the job for you.  There are hundreds of photos of the chalk cliffs of Southern England available -- and some of the best are in the series of wonderful guides for geology students orepared by Dr Ian West -- for example here:

There is no reason to think that there should be a flat or regular chalk surface on Salisbury Plain but an irregular one close to the coast!

My conclusion is that there are "periglacial stripes", grooves, ridges and rilles everywhere on the Upper Chalk, and that there is nothing remotely unusual about what has been found in the Avenue close to Stonehenge.  Sometimes the grooves will be aligned along bedding planes, faults, shear planes or even bands of flint nodues where water flow and solution are concentrated.  it is also perfectly natural that there should be "regional" or "local" preferred alignments for these features, depending on the nature of the structures and weaknesses revealed in the underlying chalk.  There is nothing in the literature, to the best of my knowledge, to counter this argument.

What these photos demonstrate is when water flows on a chalk surface 'solutional rills' will form. No surprises here!

But do any of the many grooves/rills in these photos run diagonally to the contour lines of the landscape?

This is the difference that makes a difference with the Avenue stripes. As you yourself often stressed in the past. For the Avenue stripes to run in a long straight direction diagonally to the down-slope and then to 'poof and disappear' something structural had to restrain the water flow on the ground SURFACE. Anything happening to the bedding below the ground does not explain these features of the Avenue stripes. And the existence of chalk surface grooves/rills elsewhere other than the immediate area just beyond the Avenue banks is really not helpful resolving this intriguing mystery.

All you need to do now is work out how much water is necessary to cut " a mixture of coombe rock, clay with flints and soil with some brickearth -- up to 4m thick. " and you will have a half decent hypothesis.

Been following the conversations with interest!

Is there any evidence that the rills or stripes continue beneath the Avenue all along its length: I thought it was just a reasoned assumption that they would because that is what the partial excavation indicated?

Jon -- you are quite right. I have never seen any evidence that these "periglacial stripes" are more than about 5m long! So whoever concluded that they extend along the length of the "first section" of the Avenue was involved in some serious wishful thinking......

I plead guilty of assuming these “periglacial stripes” extend along the length of the first section of the Avenue. But not to wishful thinking! My only wish is for all of us to know the truth!

But if indeed these “periglacial stripes” extend along the Avenue, are you willing to concede your subterranean bedding explanation is wrong?

Good to see you back in these pages! After all, why should I be the only thorn in Brian's side?

As for your comment, I agree. How else can you explain 4m thick mixture of coombe rock, clay with flints and soil with some brickearth in the absence of vast bodies of water?

Though, on second thought, Brian can always drag some glaciers in to save his argument!

I have never seen any evidence that these "periglacial stripes" are more than about 5m long!

Yes. That was one of the assumptive tags I have in MPP's book: Something that could come back to bite when a bit more investigation is done. I didn't get a sense of why they could not be happen-stance. There weren't that many of these tags compared to some other authors so it's not a huge criticism of the book.