A geological dilemma or two 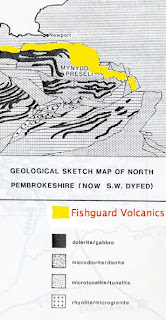 Now here's an interesting question or two, that maybe Rob, Olwen or Richard can answer.  The Pont Saeson rocks that have been matched at Stonehenge have come from an innocuous outcrop of volcanics slap in the middle of the area marked yellow on the above map.  The precise location is near the DD in Mynydd Preseli.  That means that outcrops of the same suite of rocks occur to the SE (in the area including Foes Drygarn and Carn Alw at the eastern end of the Preseli ridge), to the N (in the area to the east of Pentre Ifan burial cjamber) and then to the NW (in a belt of country on the north flank of the Carningli upland).  That latter area includes Sychpant, the strip of land incorporating Newport Castle, and then the "inland cliff" above Dinas.

What I want to know is this.  Within this whole area, (yellow on the map) how unique will be the "rock signature" of the samples taken from Pont Saeson?  The general pattern is one of strips of igneous rock, most obvious with the strips of dolerite but also (presumably) occurring within the rhyolites and other rock types within the Fishguard Volcanics).  So could the Pont Saeson samples found at Stonehenge actually have come from the same outcrop, but further north -- for example from Sychpant or the Newport or Dinas area?  I ask that because those would be the areas where I would expect entrainment to occur if a thick glacier was flowing across the landscape from NW towards SE.

Then another question -- what about the Stonehenge rocks identified (by the OU team around 1998) as probably having come from Carn Cwn, Carn Clust-y-ci and Carn Llwyd -- also on the northern flank of Carningli?  Do those identifications still stand?  Has the geochemistry on those samples now been supplemented by other work -- for example on the zircons?

epolieCarn Alw is a red herring.
PS does appear to be 'unique'
But of course there are other classes of 'debitage' -the rhyolite with sub-planar fabric of Ixer that are not provenanced.
Lots of geochem but not written up yet.
All these questions are being persued.
But it comes out in a set order. Keep reading Wilt Studies not the more recent sloany mag.
The Thorpe paper did not do the petrography -pity this could all have been known 30 years ago.
GCU In two minds

I suppose any research team can only use the expertise it has at its disposal....
Looking forward to more reports in Wilts Studies. Heaven forbid that anyone should depend upon Wilts magazine and others of the kind for the latest geological discoveries!
I thought the big OU paper HAD made the point, with an impressive amount of geology to back it up, that the bluestones had not all come from that cosy little area around Carn Meini, so beloved of the two professors?

Actually that point about the stones having come from many locations was also made more than a century ago, by our old friend Judd, who had acute powers of observation, but who lacked the sophisticated techniques available to modern geologists.

No the importance of Ixer and Bevins' work is that they have convincingly pin-pointed a location for some of the SH material.
If they can repeat this a few times for different lithics then .........
This detailed provenencing like that of the preselites is done by old fashioned petrography- a Victorian skill-the black boxwork work is just flim-flam to convince people.
Judd could have done this as well as Ixer and his co-workers-it was access to multiple polished thin sections-ah reflected light petrography is a 20th cent (just) invention -but had Judd known PS material and seen sections he could have been the one. Ah but the (Victorian petrographers) really only looked at the orthostats and as we know from Wilts 2011 they remain unprovenenced.
Using geochem without petrography for provenence studies is willfully naughty.
If a type PS section -showing most classically all the required features it would be one of Thorpe-et al's sections given a line in their 1991 paper.
But hey that is science -right people, right material, right time and lots and lots of luck.

Ah -- the old traditional methods are best! I try to say the same thing to all these young geomorphologists who are preoccupied with techniques and laboratory studies. "Just look at the landscape!" I say. Do they listen? I guess some of them do....

As for luck, I go with that. If you have hundreds or thousands of thin sections, you need a certain amount of luck (and a good memory, maybe) to match up slide 693 with slide 2847 and then say "Ah, this fragment from the Stonehenge litter came from Pont Saeson."

But I'm still intrigued by how UNIQUE that rock is to Pont Saeson. Could it equally well be found in rock outcrops one mile away, or ten miles away, in the same strip of volcanic rock? Or is the degree of alteration so unique that you can tie it down to an area 10m x 10m, or whatever?

Not being a qualified archaeo or geowhatevero I'm not sure if this will be taken on board, but 3 private access visits to SH in the last month and 8 to the "Preslies" this year have thrown up lots of questions for me.
The stones in both the bluestone horshoe and circle show similar shapes to those at Carn Menyn, but the stones at SH are considerably more weathered. This can only mean:-

a) those at SH do not come from Carn Menyn.
b) the "weathering" at SH is not natural but man-made, as a result of the blustones being re-shaped to fit later alterations.
c) the "rounded" nature of the SH stones is due to glacial transport.

Personally I go for b, but that doesn't exclude either glacial or human transport.

Not sure I follow you here, sem. What do you mean by "weathering"? If the bluestones still standing in the bluestone horseshoe had been shaped or modified by the builders, they should be less weathered, not more. there would be fresh surfaces on them where stone had been chipped off. If the stones are glacially transported, they should have few really sharp corners or edges -- glacial transport does tend to round erratics off a bit, so that they are more or less distinguishable from fresh, frost-shattered stones.

I am curious to know what evidence is used for the dating of the various stages of Stonehenge construction (some five stages according to the Wikipedia article). I am especially interested in the evidence used to determine the moving and resetting of the bluestone circle. I have been wondering about this for some time. And I would especially like to know your thoughts on this. Maybe you can have a post on the dating and phases of the bluestones at Stonehenge.

Perfectly valid question, Kostas. I am probably as guilty as everybody else of taking the "accepted wisdom" on the chronology of the site on trust -- assuming that the archaeologists who have established this chronology over the years have based it on sound evidence. Maybe, when one looks carefully, one will find a whole host of unchallenged assumptions. Any other responses on this? When I can find the time, I'll also do a bit of digging...