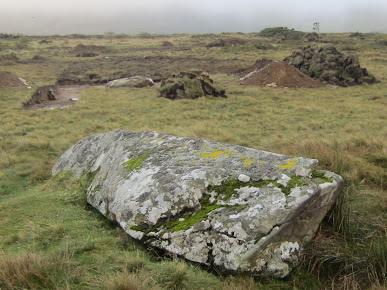 How many lies can you pack into a single press release? As it happens, quite a few. This is the highest achiever  I have ever seen — and I’ve seen quite a few in my time, in many different fields……..

There are 23 lies packed into a single press release. That’s quite an achievement.  Here is a little list:

2. “The stunning discovery” ? This is not a "discovery” at all. It is a speculation, pure and simple. It is arguable that there ever was a stone circle at Waun Mawn, and there is NO evidence of any sort that links Stonehenge with Waun Mawn.

3. The bluestones are “already known to have come from the Preseli Hills” .    Really?  Some of them probably have, but others have not — and possible sources are still being searched for.

4. The MPP team “has identified megalith quarries” ? No it hasn’t. It has claimed to have done so, but the evidence is hotly disputed in two peer papers published in 2015 which the MPP team has steadfastly refused to acknowledge or cite. That “refusal to cite” has been widely seen as academic malpractice.

5. “The dismantled stone circle nearby” ?  No link of any sort has been established between Waun Mawn and the supposed quarry sites, and the evidence all suggests that if there ever were standing stones at Waun Mawn that have gone missing, they were small monoliths sourced locally.

6. Professor Parker Pearson said: “I have been leading projects at Stonehenge since 2003 and this is the culmination of twenty years of research. It’s one of the most important discoveries I’ve ever made.” Alarm bells should be ringing straight away when the archaeology becomes a minor issue and the main focus becomes a quest in the style of King Arthur and Indiana Jones. I note that the press release makes reference to the TV programme on “the lost circle” — which did not have science or even archaeology as its focus, but the obsessive quest of one man against all the odds, fashioned quite deliberately into a three-act drama. Let's be clear — this is NOT an important discovery.

7. "The find goes a long way to solving the mystery of why the Stonehenge bluestones were brought from so far away…” No it doesn’t. This is not a “find” but a speculation, and it has never been shown through evidence that the bluestones were “brought” from anywhere distant.

8. “………. all other stone circles were erected within a short distance of their quarries.” False. Most stone circles did not need quarries at all — they were made with whatever stones happened to be handy in the neighbourhood.

9. "Only four stones remain at Waun Mawn…”   There are abundant substantial stones lying around, as revealed in the excavations.  Others have simply been ignored by the MPP team.  Some of those are bigger than those postulated to have fitted into sockets.

10. “……...now revealed as having been the third biggest stone circle in Britain, after Avebury in Wiltshire and Stanton Drew in Somerset, and also one of the earliest.”  False. This is a speculation, not a revelation. And the dating is also highly speculative, and unsupported by the evidence.

11. "Archaeological excavations in 2018 revealed empty stoneholes at Waun Mawn…” That again is a highly questionable assumption. I have examined all of the “stoneholes” and think that most of them are simply natural depressions in a till surface, far too small and shallow to have held substantial stone pillars. Mike Pitts and Prof Tim Darvill agree with me on that.

12. "Scientific dating of charcoal and sediments in the holes confirmed that it was put up around 3400 BC.”   That is not true. There was a wide range of dates (as at the two “quarry” sites) and they are across such a wide range that no conclusions can be drawn. You cannot just cherry-pick the dates that suit you, as the MPP team has done.

13. “……..both Waun Mawn and Stonehenge were aligned on the midsummer solstice sunrise.” Not true. The two postulated “sighting stones” at Waun Mawn have been chosen simply because they are "convenient”.   They are widely separated, and the arc between them is so wide that it has no significance in terms of alignment.

14. "One of the bluestones at Stonehenge has an unusual cross-section that matches one of the holes left at Waun Mawn.” That is fanciful in the extreme, and as I see it, having also seen the pit concerned,  there is no match between socket and stone.

15. "Chippings in that hole are of the same rock type as the Stonehenge stone.” That is false. No match has been demonstrated in the “Antiquity” paper. This is yet another rather wild speculation.

16. “……..the Welsh circle had a diameter of 110 metres, the same as that of the ditch that encloses Stonehenge.” False. The proposed diameter of the Waun Mawn “circle” is entirely speculative, and the idea that a ditch diameter in one place has a significant connection with a stone circle diameter somewhere else, and of a different age,  is bizarre.

17. "Waun Mawn is further evidence that the Preseli region of Wales was an important and densely settled place in Neolithic Britain, within a concentration of megalithic tombs, or dolmens, and large enclosures.” This is another unsupported assertion. Certainly there are many prehistoric features in the Preseli region, but maps do not show a greater concentration here than anywhere else, and it is irresponsible to suggest otherwise.

18. “………...evidence of activity in the thousand years after 3000 BC is almost non-existent.” False. Darvill and Wainwright have shown that there were changes going on in West Wales around the Neolithic - Bronze Age transition, but there is abundant evidence of continuity of settlement.

20. "Recent isotopic analysis of people buried at Stonehenge when the bluestones are thought to have arrived reveals that the first people to be buried there came from western Britain, very possibly west Wales.” This is another falsehood. The isotope evidence does not show this or suggest this at all.

21. “…… the Altar Stone, recently confirmed as sourced from the Brecon Beacons in South Wales.”  This is a lie. It has been suggested that he Altar Stone probably came from somewhere along the eastern outcrop of the Senni Beds in South Wales. The provenancing is no tighter than that.

23. “……..my guess is that Waun Mawn was not the only stone circle that contributed to Stonehenge.” Maybe just a guess, but it is irresponsible and misleading to pretend that any bluestone monoliths found at Stonehenge have come from a single stone circle in West Wales, let alone several.

--------------------------
I’m getting more than a little fed up with the industrial scale of the deceit coming out of the UCL Institute of Archaeology, and I have submitted a formal complaint about this press release / writeup on the UCL web site to Professor Sue Hamiltion, Institute Director. Will she reply? I have my doubts. But it's about time that these people stopped feeding nonsense to the media, dressed up as the truth.

Surely this is a case, if ever there was one, of "never mind the quality, feel the width"!

Good job Brian. The patience of a monk. I finally got around to reading the press release and it really is astounding. Worrying to think it is academic work like this which is steering government policy on areas like the Covid infection. No wonder some people do not trust experts.

Yes, clearly the press office writes whatever is fed to them by any senior member of staff without checking at all for honesty or reliability. The only criterion used is IMPACT. And yes, all this does is further undermine the confidence of the public in the claims made -- on the flimsiest of evidence -- by "experts." It's about time that the UCL press office started to think about integrity.......