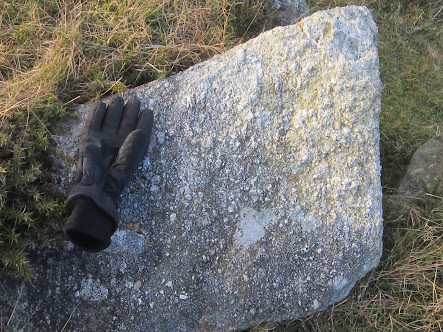 One of the erratic boulders.

For some years I have been wondering about the origins of  some strange boulders on the southern flank of Carningli, around grid ref SN061368.  There are at least a dozen of them protruding through the turf, and some are over 2m in diameter.  They seem to be restricted to one small area, in close proximity to some small bedrock exposures of dolerite.  I thought for a while that they might be part of an isolated patch (outlier or inlier) of porphyritic lava or ash, but now I am quite convinced that they are erratics in a cluster that has been picked up on the northern flank of the mountain and transported by ice across the ridge.  It's difficult to judge the precise direction of ice movement, since there is a broad band of lavas and ashes running W-E from near Dinas Cross all the way past Pentre Ifan to Brynberian.  Within this band there are fine-grained rhyolites, porphyritic lavas and welded tuffs laid down during a phase of explosive volcanic activity. The northern boundary is a fault  running W-E just south of Newport.  Many of the elongated sills and dykes of dolerite have been intruded into these older materials.

Near the eastern end of this band of Fishguard Volcanics we find the famous outcrop of Craig Rhosyfelin -- but the foliated rhyolites there are quite different in appearance.

The boulders have distinct similarities with the lavas and ashes outcropping in the tors of Carn Gwiber and Carn Fran.  It would make sense for the erratics to have been transported from near there; but  in the absence of detailed geological mapping it's best to be cautious as to origins........ 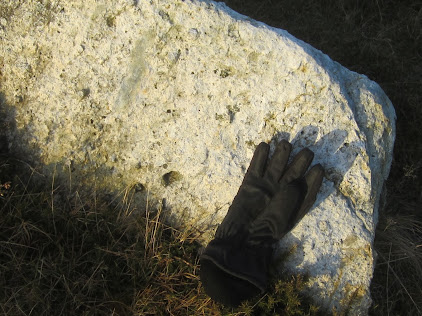 Another of the boulders. This one looks more like a welded tuff, with vesicles formed by gas bubbles now exposed at the surface. 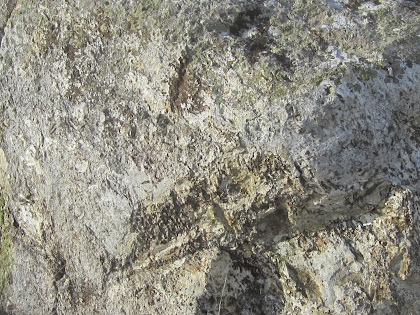 Exposed rock surface at Carn Gwiber -- related but not identical?