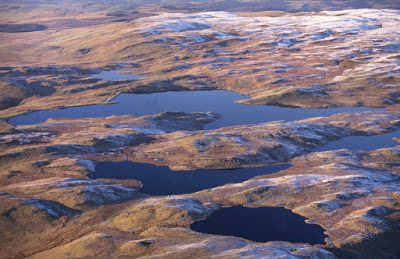 The ice shed area -- around the Teifi Lakes 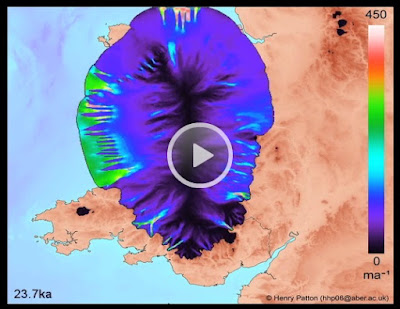 Further to my posts about the position and the characteristics of the Welsh ice-shed during the Late Devensian glacial episode, I have been thinking about ice-flow characteristics on its flanks.  We can assume that on the western flank there will have been greater accumulation, greater ablation and higher ice turnover -- in other words, conditions were more dynamic, with glaciers flowing in all the main outlet troughs down towards Cardigan Bay and into a "conflict zone" with the ice of the Irish Sea Glacier.  This shows up quite nicely in the BGS map which we have looked at many times before.  It also shows up well on the computer simulation reproduced above, by Henry Patton and others in which the areas coloured black are those of most sluggish ice-flow (in this "episode"in the sequence the ice cap is of quite limited extent.). 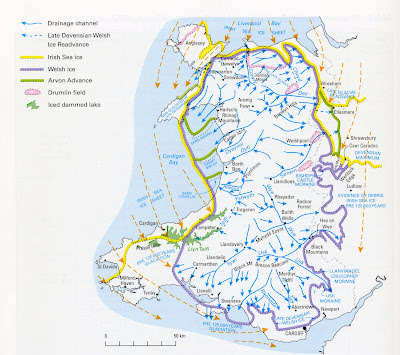 The biggest glaciers by far were the Teifi Glacier and the Tywi Glacier, each more than 70 km long, while the other western outlet routes were shorter and steeper.

On the eastern flank of the ice shed accumulation rates were lower and ice movement was more sluggish.  On the other hand there was no "conflict" with Irish Sea Ice, at least to the south of Ludlow.  There appears to have been no identifiable "Severn Glacier" but the main ice steams were in the Wye and Usk Valleys.  The glaciers were quite complex, and geomorphologists and geologists have not found it easy to unravel either the sequence of events or the ice movement directions.  The ice which accumulated in the Teifi Lakes area, between Tregaron and Rhyader, seems to have flowed SE in a coherent stream towards Builth Wells, where it split into two, with one stream flowing towards the Black Mountain and the other broadly eastwards south of Radnor Forest.  The southern stream was diverted northwards around the northern face of the Black Mountain before decanting eastwards towards Hereford.  The Usk Glacier was even more complicated, since it incorporated ice flowing southwards from mid Wales and ice flowing northwards from the Brecon Beacons.  The ice initially flowed eastwards, and then the ice stream also split into two because of the topographic barrier of the Black Mountain.

We should bear in mind that this was the Late Devensian scenario.  During earlier glaciations the ice from the southern part of the mid-Wales ice shed would have been thicker and more powerful, eliminating many of the local twists and turns and flowing broadly SE across the whole of the landscape of SE Wales towards the Severn Estuary and the Cotswold Hills.

It's this latter scenario that interests us when we try to work out what went on during the very extensive Anglian Glaciation.  According to this old map -- which I think is still pretty accurate -- it should be possible to find erratics from virtually anywhere in the SE quadrant of Wales in the Somerset Levels - Salisbury Plain landscape. 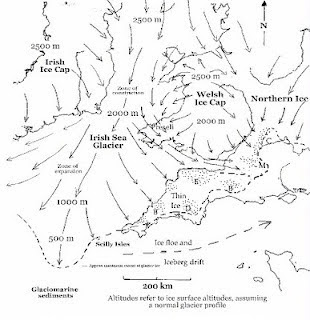 If streams of ice can split (because of topographic barriers), can they also join together (where valleys join)?

Yes Dave -- happens all the time. Confluent ice streams and diffluent ice streams are common. Some of the trough patterns in Greenland and baffin (for example) are almost rectilinear -- with crossing troughs as well. Very strange, but it happens.......