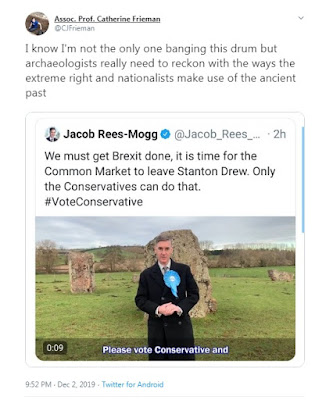 Thanks to Helen for drawing this to my attention on Twitter -- I had not seen it before, although it was posted around the time of the General Election.

Obviously the content of this rather rambling post is relevant to our earlier discussions on the "hijacking" of prehistoric monuments -- and the learned studies related to them -- for the boosting of the Brexit cause.  I hadn't realised that Rees-Mogg had done an electioneering broadcast from Stanton Drew, and that people had actually looked at it.  He obviously did lots of tweeting as well.  Serious, or just a bit of frothy fun?

Quote:     "Was it just an innocent bit of eccentric electioneering fun that just happened to take place with a megalithic backdrop? Or perhaps the film was an appeal to a certain kind of voter who craves the nostalgic fantasies of the English countryside, windswept standing stones, comical ‘scrumpy and western’ bands like The Wurzels, and Brexit?   Or was this short film altogether something more sinister?"

Quote:  "The film is a particularly egregious example of what I have come to call #BrexitPrehistory (for it was not really about the election, it was about ‘getting Brexit done’) and it indicates the increasingly casual ways that prehistory is being used to make arguments for Brexit by leavers. However, the video also became a focal point for a lot of anti-Brexit (‘remainer’) sentiment, something I would also like to unpick here.  My contention is that we should not be using a prehistoric stone circle to make any kind of points about contemporary political and social challenges although it can be tempting to do so.   Stone circles like Stanton Drew, the one chosen by JRM as his backdrop, are neither leave or remain monuments. Yet, problematically, social media reaction to Rees-Mogg’s piece to camera suggests it might be both."

Quote:  "Alice Roberts tweeted: ‘How extraordinary that Rees-Mogg chooses to stand in front of a megalithic monument – which speaks so strongly of connections across prehistoric Europe – to make an isolationist statement!’ "

Quote:  "........stone circles can and should be kept out of our Brexit battles. They are no more an indicator of what Jonathan Last, in another great response to far-right use of prehistoric monuments, has called, ‘a conservative, nostalgic narrative of a lost rural England’, than they are surviving traces of an ancient utopia of free movement and European cultural cohesion.   Stone circles should be testament to the sophistication of Neolithic people. Stone circles should continue to be a source of wonder, mystery, the otherness of the past......"
Posted by BRIAN JOHN at 18:43

If those stones could speak, what would they tell us about being represented by Jacob Rees Mogg, in whose constituency they lie?

This is a man who claims to be very intelligent, yet has had six children (naming the sixth child Sixtus) when most intelligent people were realising that the Earth should not be even more over - populated than it already is.

My opinion =
The only person to enter Parliament with honest intentions was Guy Fawkes.