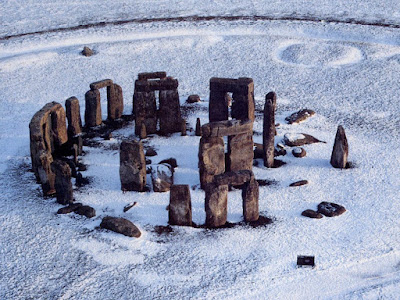 There are two new bluestone papers (or at least, papers mentioning bluestones) in the WANH magazine recently published.  The first one, by Andrew Powell, is about discoveries made beneath the old road surface adjacent to Stonehenge.  Rob Ixer was brought in to look at the characteristics of some of the debitage;  there is an appendix in which a number of samples are discussed, including some which are of igneous or volcanic origin.  Four of the discovered fragments are assigned with complete certainty to Rhosyfelin, but we are not shown any thin sections, and we may therefore dismiss the provenancing as wishful thinking.  Not for the first time.  Other samples have probably come from other locations within the north Pembs outcrops of Fishguard volcanics, either within Preseli or further afield.  There is one lump of rhyolite weighing in at around 500 g -- it does not look like a piece knocked off during the shaping of the bluestones at Stonehenge, and one wonders whether there are abundant other bits of "bluestone litter" lying about which might have come from ancient glacial deposits. This, of course, is one of the scenarios which certain geologists steadfastly refuse to consider.........

In the second paper, Ixer and his colleagues look (again!) at the Altar Stone and related samples and debitage, and admit that the previous emphasis on the infamous sample 277 may well have led to confusion and even erroneous conclusions.  They suggest that other samples probably have come from the Altar Stone or from debris related to it.  They also push the idea (yet again) that the Altar Stone came from the Senni Beds near the eastern end of the South Wales outcrop, maybe near Abergavenny.  But as far as I can see from the article, there is no evidence of any sort to support this contention.  Other researchers are also looking into the problem of the Altar Stone -- watch this space........

Along the road to Stonehenge: investigations of the Stonehenge Avenue and within the World Heritage Site
by Andrew B. Powell
with contributions by Phil Harding, L Higbee, Rob Ixer, Matt Leivers, Inés López-Dóriga, Lorraine Mepham and David Norcott, and illustrations by Rob Goller.
Wilts Archaeology and Natural Hist Mag, vol. 112 (2019), pp. 197–216

Archaeological mitigation works undertaken for the Stonehenge Environmental Improvements Project involved the excavation of two sections across the Stonehenge Avenue within the line of the former A344 road. This showed that while the Avenue’s banks had been levelled during the road’s construction it appears to have had little impact on its ditches, which in form, fills and contents closely match previously excavated sections on either side of the road. Excavation of the edge of the Heel Stone ditch also showed limited impact.

Works in the area of Airman’s Corner, close to the new Stonehenge Visitor Centre, which included the lifting, restoration and relocation of the Grade II listed Airman’s Cross memorial, and of a milestone, revealed a large quarry-like feature. This may have provided embankment material for the Salisbury to Devizes road (A360) at the point where it crossed a dry valley, as part of improvements to the road when it was turnpiked c. 1760. At some later date, the partly infilled quarry was used as a burnbaking site, at which turves were burnt to produces ashes for spreading on land newly turned from pasture to arable, a change in agricultural practice that was to cause lasting damage to many archaeological sites in the Stonehenge landscape.

The six-tonne recumbent Altar Stone is perhaps the most enigmatic of all the Stonehenge bluestones, differing markedly from the others in size, tonnage, lithology and origin. It has therefore had more than its fair share of speculation on all of these aspects and many questions remain: was it always recumbent, was it a singleton or half a twin, where did it come from? Clearly it is not from the Preseli Hills hence the debate as to its geographical origins for over a century. However, any provenancing of the Altar Stone must rely on a detailed and accurate lithological and petrographical description. New descriptions of material labelled ‘Altar Stone’ held in museum collections and a re-evaluation of suggested Altar Stone debitage using automated scanning electron microscopy and linked energy dispersive analysis using QEMSCAN technology suggests that modification of the published petrographical descriptions is needed. A new ‘typical Altar Stone’ description is provided including the presence of early cementing barite and a better characterisation of the clay content. These new data should continue to narrow the search for the geographical origin of the Altar Stone, one that is expected to be at the eastern end of the Senni Formation outcrop, an outcrop that reaches as far east as Abergavenny in the Welsh Marches.
https://s3.amazonaws.com/academia.edu.documents/37280878/38_knock_offs.pdf
Posted by BRIAN JOHN at 20:25

You are welcome to have a read and full inspection of these articles in my copy of the WANHS Magazine next time you are in the Frome/ West Wiltshire area, Brian.

"......one wonders whether there are abundant other bits of "bluestone litter" lying about which might have come from ancient glacial deposits...."

I'm pretty sure there are bound to be.

Ain't it a pity that said other bits of "bluestone litter" probably lying about are not regarded as "SEXY" by the great British Press OR, MORE PARTICULARLY the Stonehenge Archaeological Establishment?!

We could do with getting a 'TV Communicator Par Excellence' such as Professor Brian Cox or Naturalist/Scientist Chris Packham on board to give the case for glacial chunks from Pembrokeshire a proper Hearing.

Thanks for the offer of a read, Tony. I found both articles on the web by dredging about — Rob Ixer puts most things on Academia.edu, which I think anybody can sign up to by pretending to be an academic!

Yes, I have highlighted the “packing stones / hammer stones / inconvenient stones” issue many times before — and there are many of them, of all shapes and sizes, turned up in every dig. Many lithologies too. Conveniently ignored.......

.......inconvenient embarrassments, however, if placed in the hands of proper, objective, scientists.

Here are a couple of quotes from Professor Brian Cox, who I've recommended as one of our best Science candidates to communicate the glaciation hypothesis for movement of the Pembrokeshire blue stones:-

"Science is too important not to be part of popular culture"

"Scepticism must go hand in hand with retionality. When theories are shown to be false, the correct thing to do is to move on."

Brian, continuing our conversation on "bluestone litter" in the Stonehenge Greater Landscape, I am disappointed I do not yet possess important documents such as Ros Cleal et al's "Stonehenge In The Landscape", 1995, for example.

In it, I might locate more details on the following, quoted in MPP's 2005 2nd edition of Bronze Age Britain (never revised as yet):-

[pp 64-5]"....the discovery of weathered bluestone cobbles from Stonehenge itself, suggesting these [and a bluestone in Boles barrow].....also evidence for boulder clearances on Salisbury Plain in recent centuries, which could have resulted in the burial of unwanted bluestone erratics in pits. As a result of these clearances, any bluestones which might have been lying around on the plain, originally dropped by glaciers, have disappeared."

I dare say had I a greater knowledge of, say, David Field's extensive work and findings in the Salisbury Plain landscape, I could fill in more details on what MPP called, back in 2005, "weathered bluestone cobbles from Stonehenge itself", and much more in the wider Greater Stonehenge landscape and beyond.

Interesting points, Tony. I'm intrigued by the idea of burying "unwanted bluestone erratics" in pits as a part of the stone clearance exercise. Where building materials are in such short supply, that seems vanishingly unlikely. Sounds to me as if MPP is simply trying to explain why there are many "inconvenient" bluestone fragments in the regolith........ but I do recall some ancient references (cited by Olwen W-T?) referring to stones being broken up in fire pits? I suspect that would not have been to get rid of them, but to make them more manageable for building purposes.