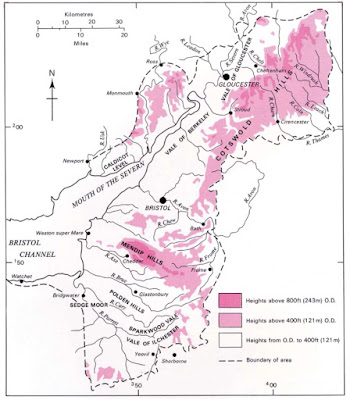 The area shown in this map is crucial for our understanding of what happened during the Quaternary, and what the string of events might have been which resulted in the hypothesised glacial transport of the bluestones. The distribution of upland and lowland is crucial; during glacial episodes uplands tend to accumulate snowcaps or even small ice caps, and ice coming in from further away (ie ice from the Welsh ice cap of the ice of the Irish Sea Glacier) will always tend to fill depressions first and then spill out of them under the influence of the ice surface gradient and the dynamism of the ice mass.  Those who have, in the past, drawn "straight line" ice edges across this territory have portrayed situations that can never have happened.  In this sort of terrain, all ice edges must have been crenulated.  Where exactly they were located during the Anglian and the Devensisn glaciations (and maybe others as well) is still open to debate!

The pattern or rivers shown here is inherited to some degree from pre-Pleistocene times,and some details will be down to diversions linked to ice action and meltwater overspills from pro-glacial lakes.

I'm giving a lot of thought just now to that latter issue.  How and where might substantial bodies of meltwater been impounded?  Was there dead icei n the depressions, with a ribbon of meltwater between of the ice and the containing hillsides?  Were the water bodies joined together -- with a common surface level?  And was there a vast expanse of water across the Somerset Levels, with hill masses standing above the surface as islands?  If so, how much debris was introduced into this water body by the melting ice, and where are the resulting deposits?