Devensian till on the Isles of Scilly 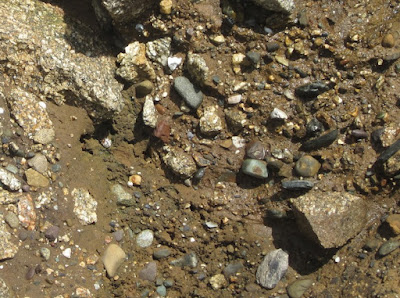 Clay-rich till with abundant erratics, near Gimble Point, north-west Tresco 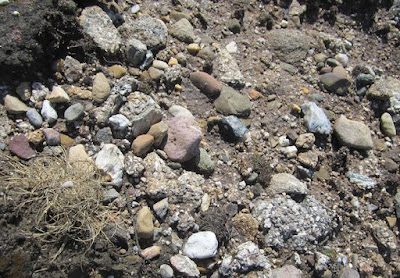 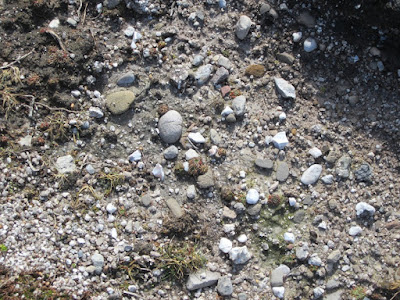 Gravelly till exposure on Tregarthen Hill towards the northern tip of Tresco. There are many such exposures within the Devensian ice limit. This material is sometimes referred to as the "Hell Bay Gravel" -- but I prefer to refer to it as till. 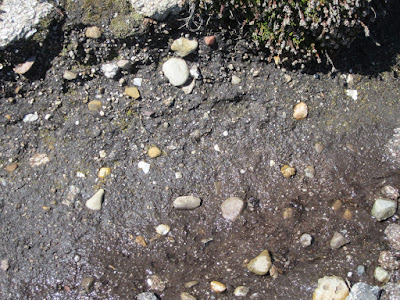 Gravelly til exposed at the ground surface on the plateau near the eastern tip of St Martins. 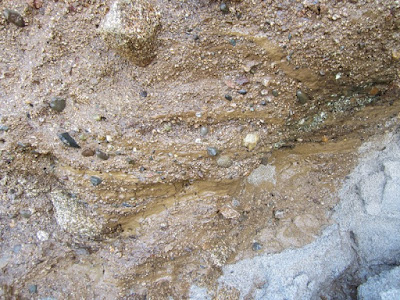 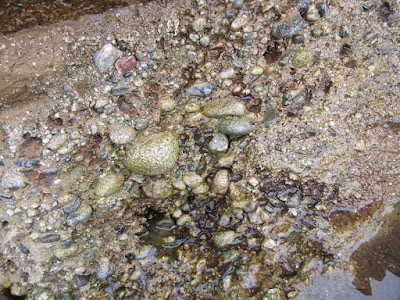 Silty Devensian till incorporating faceted and broken erratic cobbles and raised beach debris, exposed in the cliff near Carn Morval on the west side of St Mary's Island. This lies well outside the supposed Devensian ice edge of other field workers.

Some of the literature suggests that the only deposit of coherent Devensian till on the Isles of Scilly is at Bread and Cheese Cove on the isle of St Martins.  This is incorrect.  There are exposures of the till in many different locations within the ice limit, generally at the coast in low cliffs which expose granite breccia and other deposits, but sometimes at the ground surface inland.  On St Martins we can see till in the core of the moraine that links White Island to the main island, and in the spectacular cleft called Chad Girt.  On Tresco till is exposed in the cliffs to the north of Cromwell’s Castle.  On Bryher there are many exposures of till, on the western and northern flanks of Gweal Hill, at the southern and northern ends of Popplestones Bay, and in the west-facing cliffs of Hell Bay.  On the high plateaux of Bryher, Tresco and St Martins there are clear indications of ice action over 40m above sea level, with a scatter of erratics in a gravelly and sandy matrix.  In the literature these high-level deposits are referred to as the Tregarthen gravels and the Hell Bay sandy silts, but I think there is no merit in seeking to differentiate them, since the matrix of the till is highly variable, depending on the nature of the terrain and the deposits which the ice has passed over.  There are some sandy silts on Tregarthen Hill, and some gravelly tills on the slopes of Hell Bay.

Contrary to what is stated in the literature, there is also thin and patchy Devensian till on the north and west coasts of St Agnes Isle, as far south as Long Point.  It is nowhere more than 50 cms thick, and it is difficult to interpret because it is not particularly clay-rich, but consists largely of reworked raised beach materials mixed with occasional faceted erratic cobbles.  As it moved in from the north or north-west, the ice must have overridden and incorporated large quantities of old storm beach and shingle beach materials.   At White Par the till lies on top of 2.5 m of “lower head” or grus with granite clasts in a gravelly granular matrix.  Elsewhere it lies above 1m of light brown silts showing some bedding structures, and beneath 1m of gravelly granite breccia capped by darker silts and sands at the ground surface.

According to Scourse, Hiemstra and others the “Scilly Till Member” (the name given to this Devensian till) is overlain by the “Tregarthen Member” (sandy gravel with erratics) and then by the “Hell Bay Member” which consists of sandy silt with erratics incorporated.

I do not agree that the “Hell Bay Member” of the St Martins Formation is stratigraphically higher or younger than the “Tregarthen Member” -- life would be much simpler if we referred simply to till which has been subject to varying degrees of reworking and redistribution, depending upon slope and moisture conditions.  Some of the tills appear to be thin flow tills which have moved into depressions or gaps between granite outcrops. It appears to me that this “redistribution” was actually a part of the depositional process, and was not something that happened hundreds or thousands of years after the ending of the glacial incursion across the coastline.  Hiemstra et al (2006) refer to the sequence of events “glacitectonization” of older sediments pushed onshore during a short-lived surge, followed by “paraglacial redistribution” and then by “periglacial disaggregation”; this is all a bit of a mouthful, and I am not sure that there was much in the way of periglacial activity here anyway.  Of course there was, at the time, no such thing as a coastline here........ 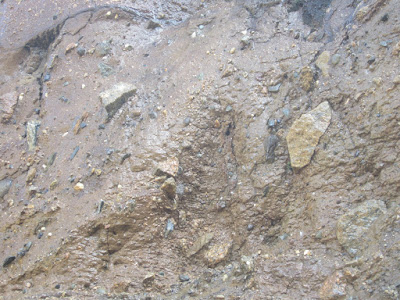 Clay-rich Devensian till exposed at Chad Girt, on the eastern side of White Island.  This till is very similar to that exposed in Bread and Cheese Cove on St Martin's Island. 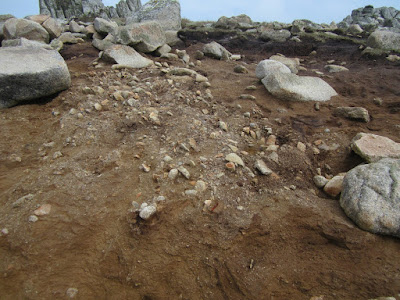 A patch of till exposed south of Carnew Point on the west side of St Agnes Island.  It rests on sandy reddish colluvium.  There are other similar exposures near Long Point, where the thin till rests on c 2.5 m of  rotten granite breccia.  This is the first time that Devensian till has been described from St Agnes Island. 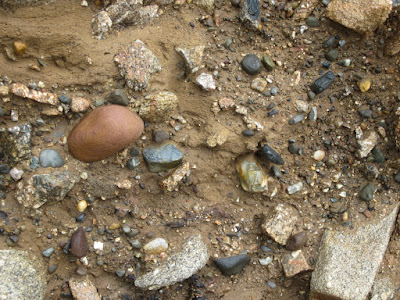 Erratic rich Devensian till at little Popplestones, on the west side of Bryher Island.  This exposure is just outside a morainic ridge, and lies beyond the Devensian ice limit of other authors.

It appears from my observations that the Devensian ice certainly affected the western edges of the the Isles of Scilly as well as the north coast.  I was not able to visit Samson  and Annet during a one-week visit, but those islands, and the outer skerries, could well have been affected by ice coming in from the north and west, as St Agnes was.  The extreme southernmost extent of the Devensian ice must have been to the south of the islands.